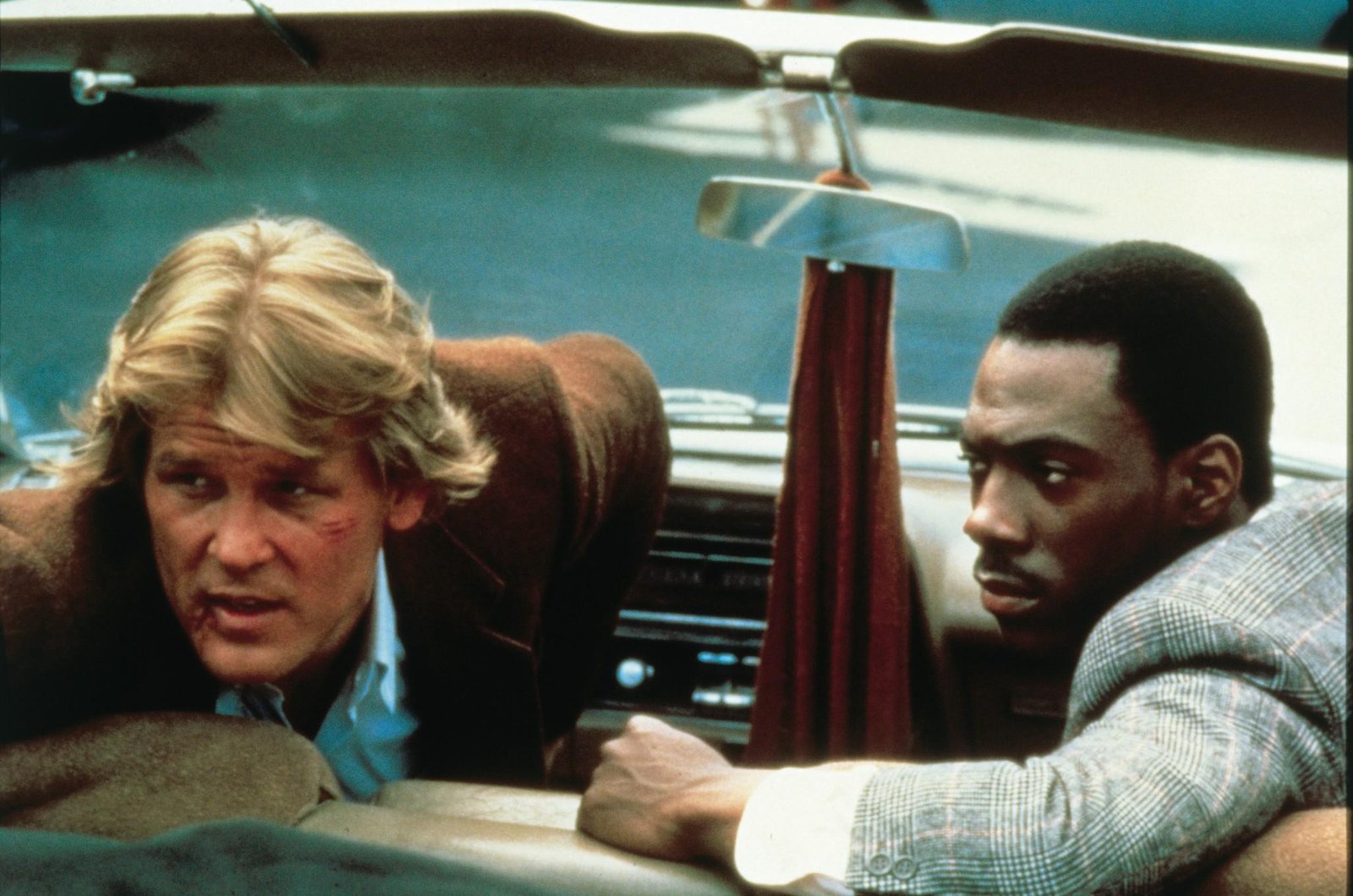 “We ain’t partners. We ain’t brothers. And we ain’t friends. I’m puttin’ you down and keepin’ you down until Ganz is locked up or dead. And if Ganz gets away, you’re gonna be sorry YOU ever MET me!” 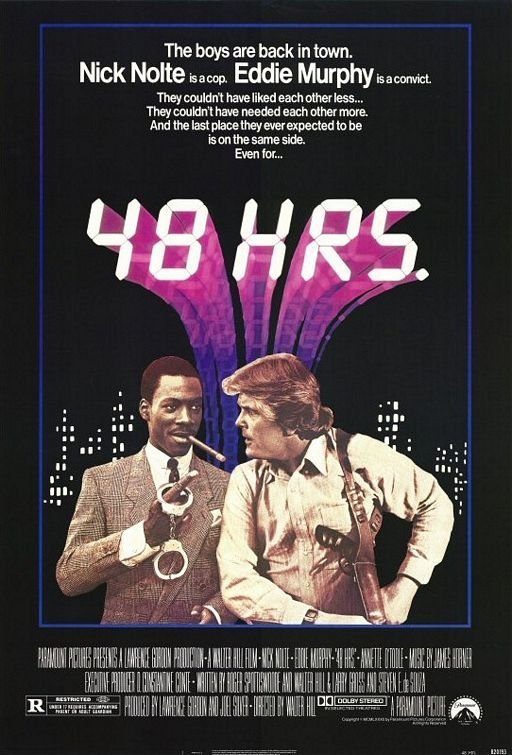 They call it a “buddy picture,” but these two are not buddies. Psycho James Remar (from director Walter Hill’s The Warriors) gets sprung from a prison chain gang by his cohort. After killing a couple of cops, they set about looking for their lost loot and a guy named Luther, who helped them steal a half a million bucks. The lone survivor of the shoot-out, embittered Inspector Jack Cates (perpetually intense tough guy Nick Nolte), arranges to have a member of Remar’s running crew, Reggie Hammond (electric Eddie Murphy, in his career-making debut), released from prison for 48 hours to help him track down Remar and his boys.

With Murphy, it’s just one complaint after another. He rails against Nolte’s mistreatment of him. He complains endlessly about his need for “female companionship.” As a result, Murphy’s character is extremely annoying and irritating. They test each other with constant games of machismo. The movie has a refreshing (if off-putting) streak of misogyny running throughout. Nolte sends him into a cowboy bar so he can masquerade as a cop (without a gun) to get information on Remar. He causes a scene, insults the patrons, and exits with a John Wayne-style swagger. Nolte and Murphy play off with each other with an explosive chemistry, which is more dangerous than dynamic. Nolte is your typical Dirty Harry; gravel-voiced and stormy. Murphy is a con-man, spared of any ethical quandry. While the characters bond, it’s only a temporary bond, and both parties will return to their respective roles at film’s end.

Nolte’s Cates is at his wit’s end in his dealings with Hammond.  It’s obvious Hammond is leaving out crucial information with regard to his association with Remar.  Nolte sucker-punches him and they have a good-old-fashioned street-fight.  It’s interesting to me watching Murphy hold his own (even though it makes no sense, Nolte is twice his size), but Hammond comes clean.  The missing money is in the trunk of his car.  They stake out the parking lot and see Luther (David Patrick Kelly, also from The Warriors) make off with Hammond’s car.  Luther takes off with the money.  Cates and Hammond give chase, which leads them into the subway system, where Remar is waiting.  This is a great, suspenseful set-piece.

Unfortunately, so much time is spent developing Nolte and Murphy’s characters that very little running time is left to explore Remar, his twisted Indian cohort, Luther, or even Nolte’s girlfriend, Elaine (the gorgeous Annette O’Toole). My guess is Hill knew he had lightning-in-a-bottle with the two leads, therefore he ripped out whole chunks of the otherwise excellent script (credited to Hill, Roger Spottiswoode, Steven E. de Souza, and Larry Gross) and put the emphasis on their story. Because of that, 48 Hrs. feels strangely unbalanced. Despite this serious flaw, 48 Hrs. was extremely influential for action movies in the ’80s. The polished graphic violence and gun-shot explosions recall Sam Peckinpah (for whom Hill wrote The Getaway).