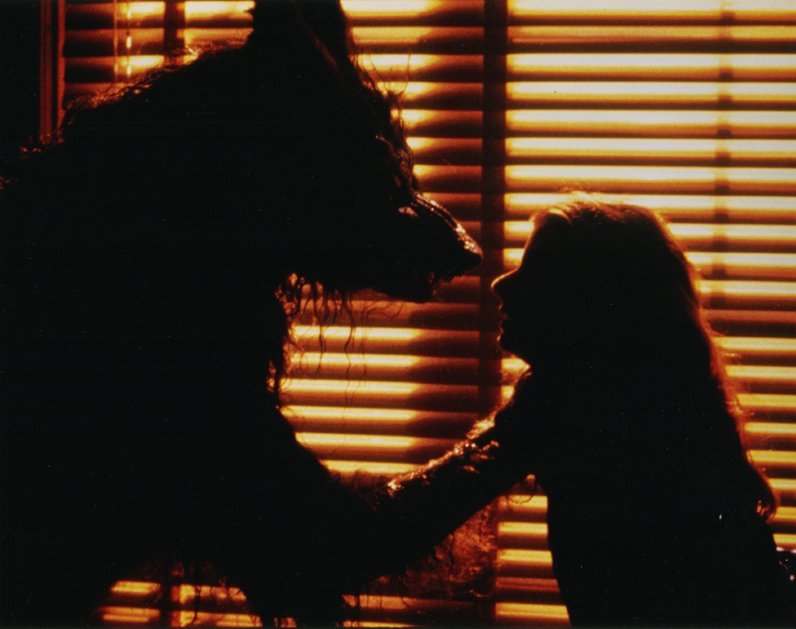 “Humans are our prey. We should feed on them, like we’ve always done. Screw all this ‘channel your energies’ crap.” 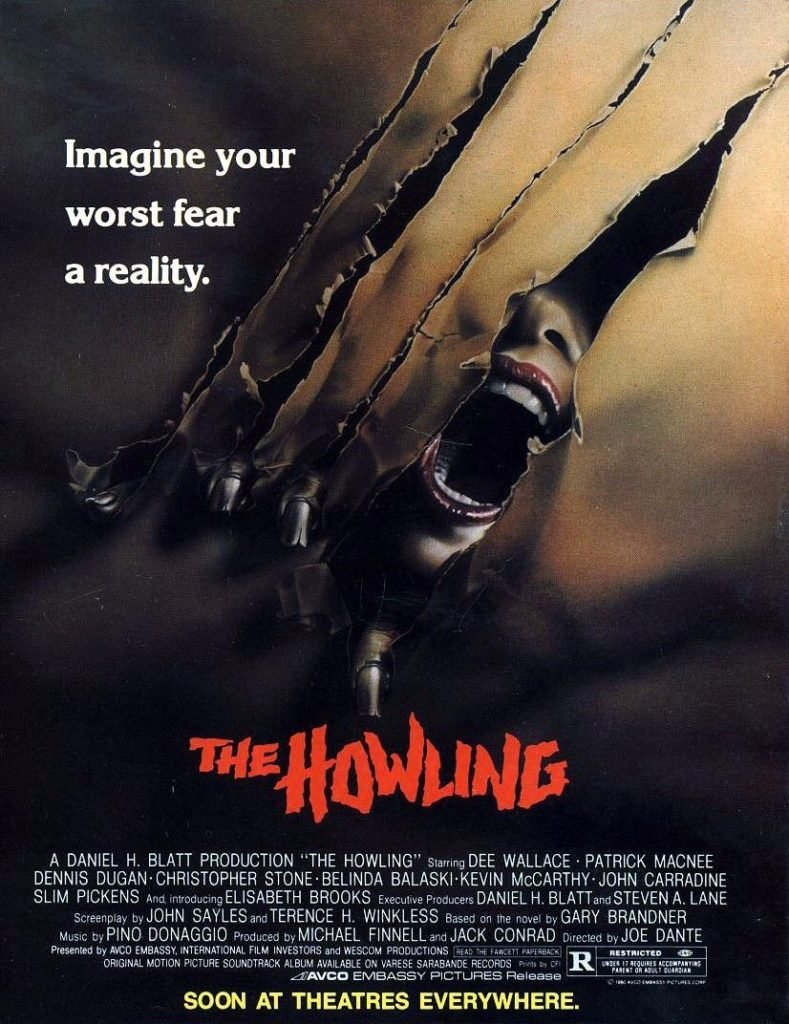 The proverbial “girl with a head on her shoulders” and ’80s horror movie scream queen, Dee Wallace, is a TV news anchor on her way to a clandestine (yet fully advertised) meeting with serial killer Eddie Quist (Robert Picardo). Through a series of clever happy face sticker visual markers, she makes her way to a cozy adult movie theater, where she witnesses Eddie transform into something, but she isn’t quite sure what (though we do get glimpses of fur and we hear growling voices). The cops show up in the nick of time and gun him down. She’s left in a state of shock and suffers some selective amnesia. Pop psychologist Patrick Macnee invites her and husband Bill (Christopher Stone) to spend some time at The Colony, a Northern California retreat for neurotics and sex maniacs.

What Dee doesn’t know is that Patrick Macnee, in addition to his pioneering work into “inner self” and “animal instinct” analysis, is the defacto governor of a group of “domesticated” werewolves whom he has convinced to adapt to modern human society. There are some stragglers (a peachy keen John Carradine among them) who resist Macnee’s philosophy. I don’t know what their plan is; they seem to welcome Dee and hubby into the pack (heh) but then they play dumb when mysterious things start to happen. Dee hears howling in the woods late at night. They find dead animals everywhere. Bad-boy Bill comes home with nasty scars. Eddie Quist, a gifted artist with a fetish for sketching wolf creatures is linked to Macnee’s Colony.

Dee’s friend, Terri (Belinda Balaski) joins her at the Colony, but is very quickly killed by a furry tenant. The werewolf is revealed to be Eddie as werewolves can’t be killed by conventional means. According to an occult bookstore owner (hilarious Joe Dante regular Dick Miller), only fire and silver bullets will successfully dispatch these creatures. They’re worse than cock-a-roaches! Adding up the clues, Dee and Terri’s grieving boyfriend, Chris (Dennis Dugan) come up with a plan to expose the werewolf activities at the Colony. It’s interesting how this quite frightening horror movie is cut like a comedy, though it’s not as overt as the same year’s An American Werewolf in London.

The Howling is a self-referential horror/satire that mocks new age psychology, much in the way 1978’s Invasion of the Body Snatchers remake pokes fun at the “Me” generation and it’s obsession with self-help psychology. Here we have bloodthirsty animals attempting to assimilate (at least some of them) into human society. It’s also a movie made by horror film fans. There are cutting references to The Wolf Man (starring Lon Chaney Jr.) made in 1941, as well as cameos from Roger Corman, Forrest J. Ackerman, screenwriter John Sayles, and Kevin McCarthy. Dee Wallace would appear in E.T., Cujo, and Critters. Joe Dante would go on to direct a segment of Twilight Zone: The Movie, Gremlins, and it’s underrated 1990 sequel.