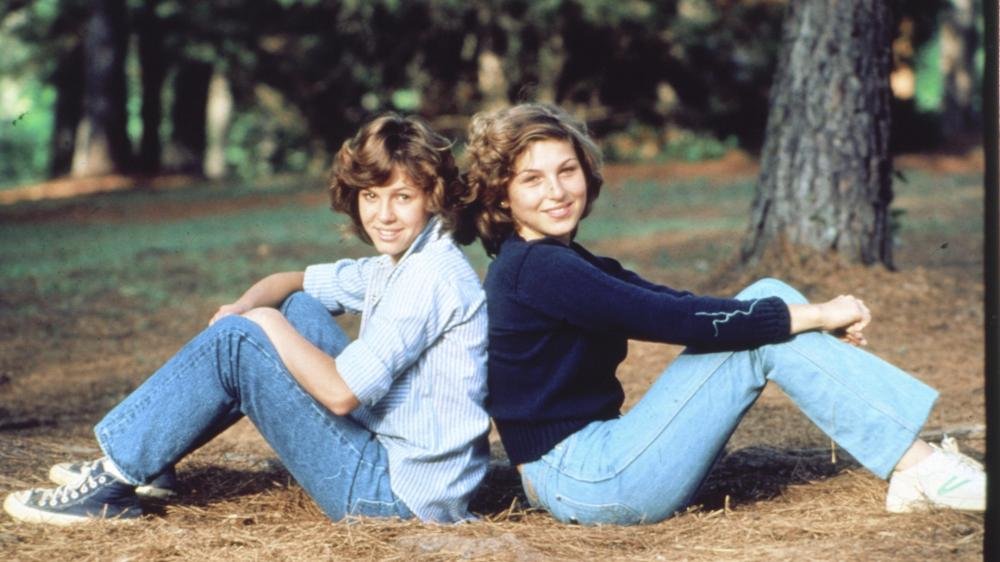 “Do you realize that I am almost the only virgin in camp? Every girl knows this secret life except me. Look at it this way. It’d be a learning experience.” 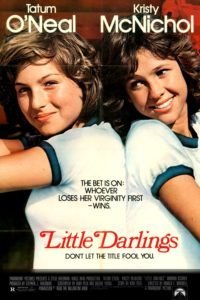 On a strange hot summer night, I pop in the old Paramount tape of Little Darlings. I remember the juxtaposition of Kristy McNichol kicking a guy right in the nuts before hopping into a convertible on her way to the summer camp bus, and Tatum O’ Neal going to the same bus in a Rolls Royce. Angel is a kid from the wrong side of the tracks. She’s a jean-jacket-wearing little hottie with a chip on her shoulder. Ferris (Ferris?) is a spoiled little rich girl predisposed to shit-eating grins and compulsive lying, but more on that later.

The two girls hate each other, so you know they’re going to wind up best friends by the end of the movie. They even fight on the bus ride. It’s unusual watching girls display this kind of behavior. They push each other, they mix it up, compare the size of their burgeoning boobies, and talk openly about sex and birth control. Both girls find themselves harrassed (for different reasons) at the camp. Ferris and Angel are very quickly revealed (in ways I can’t quite explain) to be virgins, and one particular brat offers up $100 to the first girl who can lose her virginity before camp ends.

The girls engage in the usual summer camp antics; softball, boating (with dreamy counselor/stud Armand Assante – I keep using that word a lot lately), and hiking. Tatum hits it off with Assante (who seems to be flirting with her) as they discuss France and astrological signs. It’s times like this that I wonder if I have what it takes to be a camp counselor at a girls camp. Yes! Yes, I do! The girls choose their intended targets. Tatum, of course, choose dreamy Armand, and Kristy has her eyes on young Matt Dillon. Dillon is very much her speed and the kind of guy she would date anyway. While he seems tough with street-born good looks, he is revealed to be sensitive and vulnerable, and the way she sizes him up is fantastic.

This is an unusual film for 1980, coming out (pun!) at the peak of summer camp movies; at least comedies that didn’t involve super-human killers who wear hockey masks.  It’s an interesting reversal of gender motivations, where we have the girls acting as predators in the tribal ritual of lust, and the men are depicted as the prey; essentially clueless as to the intentions of Angel and Ferris.  The filmmakers are careful to not exploit the girls, and the clever scripting (by Kimi Peck and Dalene Young) plays to the strengths of McNichol and O’ Neal (I can understand why girls flocked to this movie when it was released), both utterly adorable in this film.  A very young Cynthia Nixon is hilarious as some kind of a crazy hippie flower girl.  McNichol, in particular, is a brilliant actress.

In an interesting twist, Tatum, her face glowing, lies that she had sex with Assante (who politely brushes her off in a sweet scene), and Kristy lies that she did not have sex with Dillon.  In reality, Kristy understands all of the consequences of a sexual relationship, while Tatum romanticizes it to the point of losing all touch with her specific actuality.  I think what I learned from the movie is not that girls are objects to be lusted after (they most definitely are, in my view), but that girls are capable of the same kind of behaviors we normally attribute to the male of the species.  The men in this movie are photographed as objects of beauty and game to be conquered, and I find that to be refreshing.