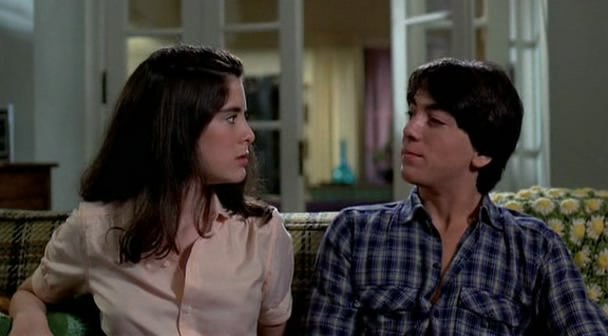 “Sometimes life is like an onion. When you peel it, it makes you cry.” 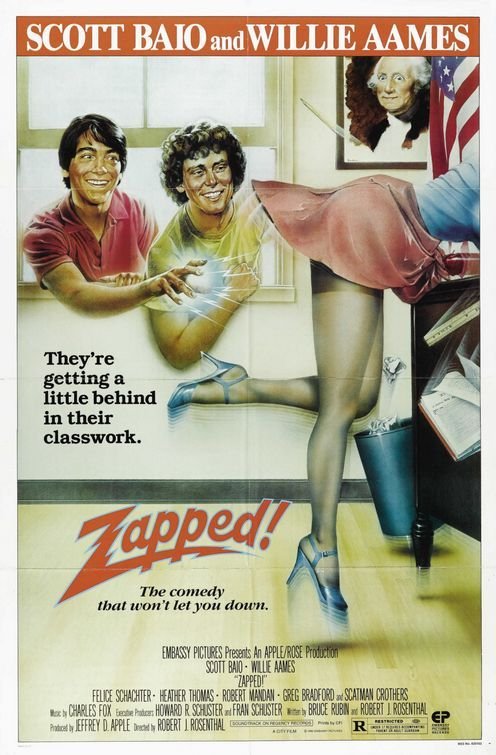 Scott Baio has been given a gift. He’s a brilliant young man – a scientist! All day long in high school, he wears a lab coat cand conducts experiments involving marijuana, alcohol, and white mice. I remember my Mother told me a story about how she placed second in the County Science Fair. She was feeding alcohol to fruit flies to observe effects and consequences. Even second place, the experiment was an official board selection and an article was penned for Scientific American circa 1964. I look at all that past aptitude and then look at my Mother these days and I wonder where it all went. We’re capable of so much sagacity in our early years and then the fever dies down as we watch our hopes and dreams taken away from us like garbage on a regular Monday morning. Back to the Baio! He wouldn’t be an enterprising young man without a Huckleberry, would he? Huckleberry, in this exercise, is played by stalwart Baio-buddy, Willie Aames (who would in short order join him for Charles in Charge). Aames serves as the Baio-id, perhaps the Hyde to his Jekyll; untamed libido and dissolute greed.

This is the requisite high school of movie-maker wet dreams; clean-cut kids, extremely short cheerleader skirts, and students who look at least a decade older than they should look. Right away we have our cliques, as identified by hair color: the brains are brunettes, and the blondes … well, let’s just say they have more fun.  Scatman Crothers (in a hilarious bit), looking for Baio’s stash of Jack Daniels), accidentally spills some “Super Growth Plant Food” into the “Cannabis Extract.” This must be one of them California high schools, huh? Huh? Because … pot was recently legalized in … nevermind. Scatman unwittingly creates a mutant potion when Aames (being a scamp!) pours beer into the mixture, which will shortly give Baio powers. Incredible powers! Incredible powers of telekinesis! Meanwhile Felice Schachter’s Bernadette (who we don’t know is actually a fox without her ridiculous glasses) keeps pestering Baio for an interview. Interesting that Felice beat out Demi Moore and Helen Slater for the part. They eventually hook up, but you know this is going to happen. An accident ensues and Baio is exposed to a chemical reaction.

Baio’s parents (Roger Bowen and Marya Small, who I just saw in a Kolchak episode) are, of course, ignorant to his plight. They seem like the kind of people who watch 20/20, and you have to wonder how they get along in bed. Instead of communicating with their son, they interrogate him about drug usage and check him for tracks in his veins. Remember Matthew Broderick’s parents in WarGames? Same deal here. Baio develops his powers, slowly at first, but then they blossom in the most awkward of ways. He fantasizes (during class) about Heather Thomas stripping in front of him while repeatedly calling his name, and he gets a hard-on. He is called on by his teacher and arranges for the map display to unravel all over her and school principal, Walter Coolidge (Soap’s Robert Mandan). The cast is populated with television actors. Back then, television and movies were separate islands, and actors never dared tread the waters between. This is why Zapped! feels like a television movie for most of it’s running time, until the boobies start popping out. It’s weird to me the producers felt pressured to add nudity to the movie to give it an R rating. That just doesn’t happen today. 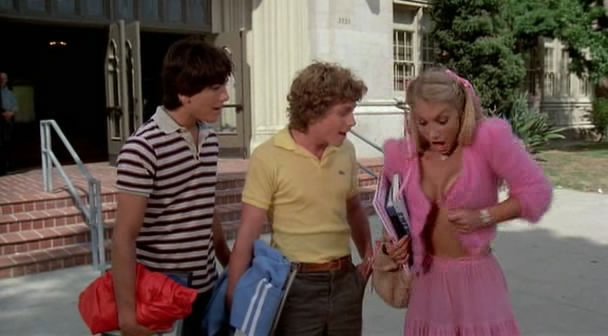 Now we get to Baio’s special gift. This is a young man who could help people. He could be a real, literal superhero. He could do some heavy lifting, tugging a couch or piano out an apartment window for his moving buddies with his mind. Instead he uses his newfound talent to expose breasts. This is the Aames-as-Satan connection. Bizarre, in that Willie Aames (a very popular child actor) became a born-again Christian in the ’90s and was known for his character, Bibleman (a true superhero!). Bibleman’s alter-ego, Miles Peterson, would not approve of this garden variety-Buddy Lembeck’s obsession with sex and profit for fun. Felice crack’s Baio’s blue steel facade and falls in love with him, which is sweet. I’m a fan of their love. I don’t like him trying to remove her top with his mind as they make out, but otherwise Zapped! is a lot of fun. It feels like a TV movie that was recut (with added nude scenes) for the less-uptight European audience. There are parody bits throughout the movie; the funniest of them being Star Trek (with an obvious Millenium Falcon/U.S.S. Enterprise model hybrid), The Exorcist (involving a “possessed” ventriloquist’s dummy), and Carrie. Thank you, Scott Baio, for making us laugh at love … again.

And thank you to Mark Jeacoma, who suggested this entry to me a long time ago, as well as hosting these articles for going on two years now! For an entertaining podcast on the subject of Zapped!, check out Mark’s discussion of the movie with Chris Hasler.