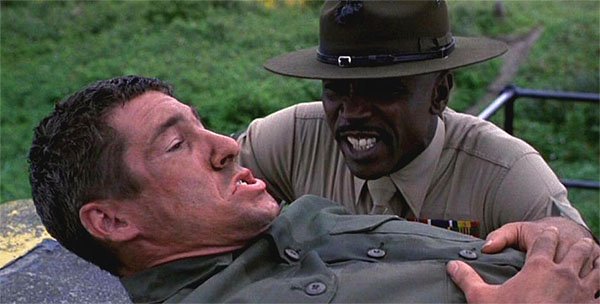 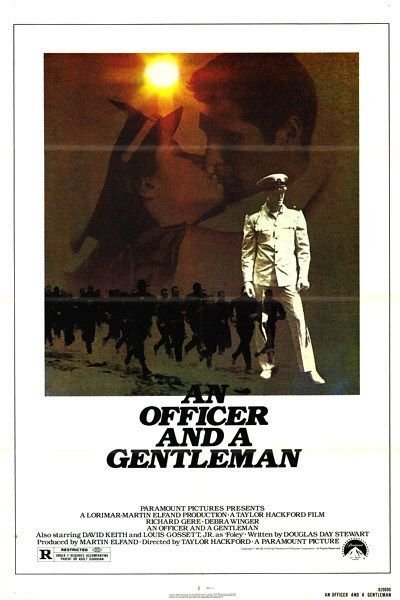 An Officer and a Gentleman, 1982 (Richard Gere), Paramount Pictures

Zack Mayo ditches his good-for-nothing Dad (Robert Loggia) to join the Navy so he can “fly jets.” This first plot development is given no explanation other than Mayo’s repeated jets refrain and a series of quick flashbacks revealing Zack’s youthful vulnerabilities. This is what he tells everybody who asks why he would do such a thing, from fast friends like Sid (David Keith) to his no-nonsense drill instructor (a wonderful Louis Gossett, Jr.) and his girl (fiery Debra Winger). Long-haired wife-beater wearing Richard Gere inhabits Mayo in a much more endearing way than he would with the following year’s Breathless. He’s much more earnest and passionate, therefore believable, in Taylor Hackford’s An Officer and a Gentleman than in most of his later films.

When Zack is lined up with fellow recruits, we see how these people looked before they officially enlisted in the Navy: all long hair and blue jeans, and I wonder why they chose to serve their Country (instead of “bad-mouthing it” as Gossett, Jr.’s drill instructor would accuse them) in this manner. Gossett, Jr.’s Sergeant Foley tells them every year he gets a batch of new, raw recruits, and that many of them go “D.O.R.” or dropped on request because they can’t handle the rigors of their training. Foley doesn’t expect this bunch to be any different. He assigns them nicknames, shaves their heads, and builds them into dedicated, tenacious fighting soldiers.

We learn very quickly that in the small town where this Naval base is located, there are women waiting to run off and get married to officers; Debra, and her friend, Lynette (Lisa Blount), being two of them.  Foley warns the men (not Lisa Eilbacher’s Seeger) that these women will try to trap them with marriage and children, as their mothers had done previously.  Debra’s mother tried the same tactic with her biological father.  While Zack is an emotionally guarded young man, his friend Sid isn’t so street-smart and savvy.  Sid is locked into a relationship with Lynnette and when he terminates his training contract and buys her a engagement ring, she coldly tells him she never loved him and just wanted to be married to an officer.

Given the emotional heft of the story, Gere’s Mayo is a profoundly interesting character because, in some stretches, he is unlikable when confronting his girlfriend’s needs, and truly inspiring in his attempts to improve his condition and develop discipline when faced with the opposition of his peers and his top sergeant.  Foley correctly determines that Mayo needs him and his Navy to become a better person.  In the early ’80s, there seemed to be an abbreviated wave of films where previously lazy, irresponsible people joined some section of the Armed Services and then became better, more studious (or at the very least, resourceful) people.  Examples include Stripes, Private Benjamin, and Purple Hearts.  Douglas Day Stewart’s script is a shining example of a successful character study brought to life by marvelous performances from Gere, Winger, Gossett, Jr. (for which he won an Academy Award), and Keith.  The ending always leaves me cheering.