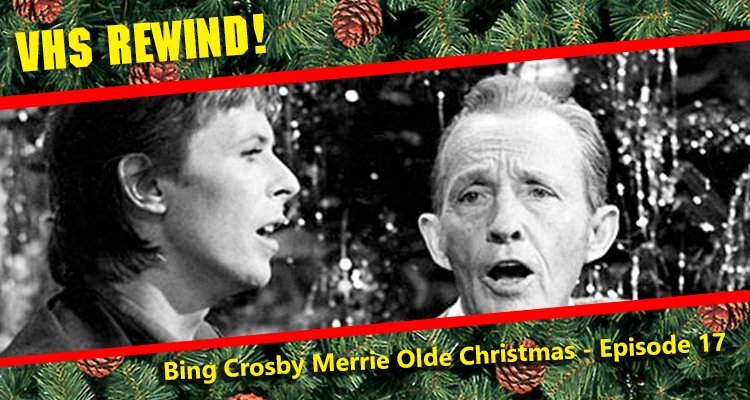 Christopher Hasler:  After the exuberant, life-affirming, Christmas-is-here holiday cheer provided by the Osmond family on our last episode, the BING CROSBY MERRIE OLDE CHRISTMAS simply sucked every ounce of life and good cheer from your estimable VHS Rewind hosts. We thought the mix of the Christmas season with Bing (Mr. White Christmas himself) Crosby would yield at leats an hour of perfectly pleasant Christmas carols (if nothing else) but Bing and his producers throw us a curve by not only giving us a Christmas special that is devoid of any Christmas spirit but by having Bing and his talent-less family pack their bags and go to England for the duration of the program(!)…we are treated not to the kind of kitsch that was a hallmark of the Osmond special but some rather dry, droll (veddy veddy droll) british humor(!)…Bing not only has a conversation with (the ghost of) Charles Dickens but Twiggy (yes, Twiggy) has an extended musical number where she essays a few of Dickens’ better known characters…an excruciating 50 minute program is enlivened by a few small (very few, very small) bits including an appearance by David Bowie, some hilarious jibes at former Crosby partner Bob Hope, terrible line readings by the Crosby family members, a few pleasantly sung christmas carols…Bing filmed this program in Sept 1977 and was dead by the time this puppy aired in November 1977…it damned near killed us at VHS Rewind…