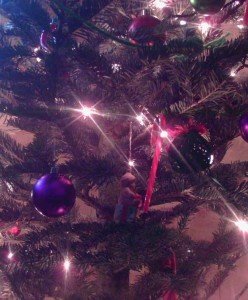 “So this is war, and what have you done?”

It’s all over much too quickly. Christmas is a handful. Right after Halloween, we start getting the circulars, the flyers, the wasted tree catalogs (my favorite being Williams Sonoma, what with their $100 macaroni & cheese lobster, so gosh-darn decadent!) True multi-faceted meanings of Christmas and the holiday season in general; the first day of the rest of your season is a time of true store-bought joy.

My daughter rules Christmas. Her word is law. Christmas is also her birthday, so it’s a double feast, a double celebration, double cake and pie, extra whipped cream. I love her, but jeez – tone it down, pull on the reins and let us all catch our breath (I know she won’t). There’s a whole bunch of new toys she isn’t playing with, and what really matters is the package. Tearing into those meticulously-wrapped boxes is part-and-parcel – the celebration.

Skimpy tree in the corner needs to come down, but pick-up isn’t until the 5th, so all we’re doing is collecting needles at this point. Television is the worst; advertisements manipulating heart-strings, telling me I’m the worst parent in the world because I won’t buy my 8-year-old daughter a $200 iPhone (hell, it’s contract free!). This kid breaks things just to prove a point, but she can’t help it. She’s a kid. Cell phones are supposed to be toys for adults, not children.

I saw the coolest thing at my nearby Rite Aid. It was an Atari 2600, not with cartridges. All the games were pre-loaded into a console that was modeled after the Atari 2600. It had the joysticks included, and it looked like so much fun. I might just buy it in clearance. I never had an Atari. The best I could manage was a second-hand Coleco Vision that smelled of old socks. I paid for the thing with bus tokens, 5 packs, which meant I had to take a long walk to school for five weeks. My friend, Jeremy, scoffed at me. He had a Commodore 64, so he was definitely The Pimp!

I like one thing about Christmas – decorating the tree, getting all freakin’-fun-festive, and then I get that tune stuck in my head; something stupid from a television commercial, something from Target. Visions of sugarplum fairy entrails roped around a gorgeous Douglas Fir dance in my mind. “A Christmas Story” plays non-stop and I’ve got the dialogue memorized. I keep telling that kid not to stick his tongue to the pole – what an idiot!

Now we slam abruptly into the New Year. My Christmas tree is giving me the finger. It really is! I peak past the doorway from the kitchen and there it is, flipping me off…but it’s so festive! God kill us all, every one! So this is war, and what have we done? I don’t mean “what have we done?” as a simple, rhetorical question, but a droning David Byrne mantra – “My God! What have I done!” I’ve become an enabler in the holiday tradition.

“Let It Go”, the song tells us. So we’ll make some soup for the poor, because if there’s anything television tells me, it’s that poor people love soup. That should calm the shakes and bring us swan-diving into 2015! Hug a cop! Yeah, I said it! In summation, Christmas is a horrible holiday; at once filled with so many historical and religious inaccuracies, but also a foundation for materialism-induced misery and…it’s all over much too quickly.