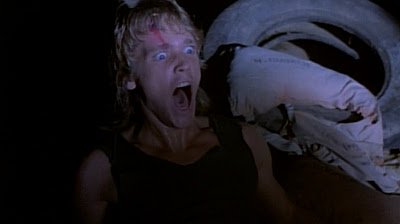 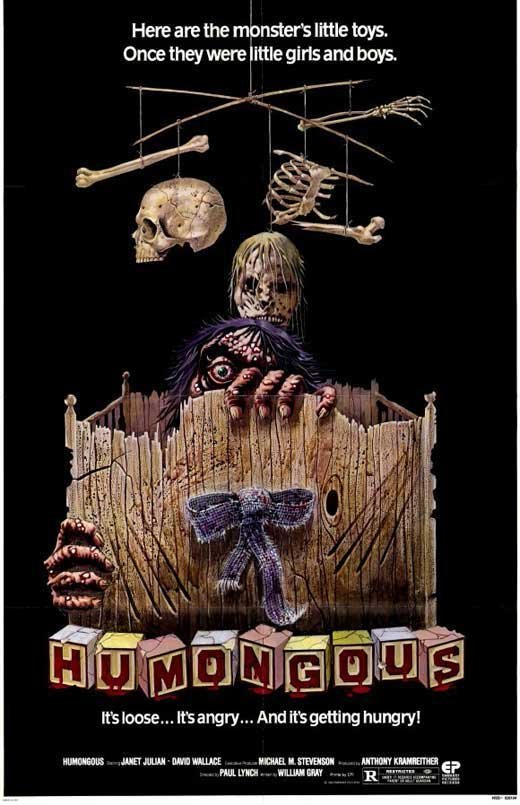 Labor Day weekend, 1946. A floating point-of-view killer shot cuts across some still water and we see overly-made-up white people enjoying their whiteness. I honestly don’t know what white people get up to these days. They seem to want to make everybody else feel ashamed for their whiteness, but that’s none of my business. Most horror movies with an eye toward ripping off either Halloween or Friday the 13th find it necessary to begin with a quaint flashback. Some minor past trauma and then we’re off to the races. A young couple argues in the cricket-deafening woods and some dogs go nuts. The argument goes south real fast and then turns into rape. It reminds me of Ray Liotta’s rape of Pia Zadora with a garden hose in The Lonely Lady, but this is far more graphic. Can you imagine walking into this movie with a bucket of popcorn and seeing this? The rapist is then attacked by the lady’s vicious dog and then she finishes the job. Credits roll. Nice.

I don’t get it. We go from this horrific opening bit to some badly-written, badly-acted nonsense with teens in their late twenties walking around, clothing-optional, playing crazy head-and-sex games with each other. They go on a boat ride and rock out and drink beer and dance (such rebels!). So we have a fresh differentiation between rape and sex, or do we? Most of the time, the boys are acting out the aggressor part while the women tease and seduce them. We cut to creepy night and fog rolling in around that really nice boat. I wonder if I missed the explanation of what the hell they’re doing out there. They come across a smaller boat with a man. They bring him in and tie off the boats. It seems the kids are on their way to an island, but their passenger warns of dogs inhabiting the island, and a crazy old woman (you see where this is going) who takes care of them. The dialogue is so bizarre I thought the actors were given incorrectly-labeled pages. Anyway, the boat catches fire. Maybe the dogs were playing with matches. Bad dogs! 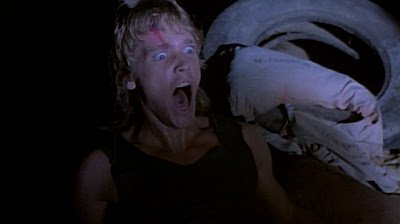 The kids jump off the boat and land on the shore of the Crazy Dog Island (that’s my name for it). So we have the kids stranded on this island and being menaced by either dogs or hooded figures. It’s an interesting twist on the slasher genre, but the kids come off so stupid and annoying you’re just praying they come to a quick death. The story (for me) recalls The Most Dangerous Game and Attack of the Killer Shrews. It’s up to the kids to disseminate the clues, as it seems some strange dog-beast is knocking them off, one by one. Of course, rather than seek help or find some means of getting off this Crazy Dog Island, they wait around to be killed, which is extremely boring. I mean, at least give me something to chew on! It turns out the woman in the pre-credits rape scene (through a helpful journal she kept) had a deformed rape baby that is really pissed off. Always remember to have your dogs (or mutant spawn) spayed or neutered!