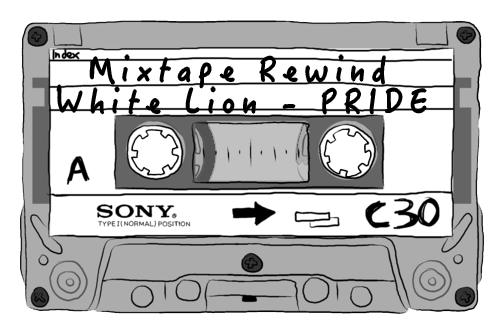 According to an interview with Sea of Tranquility, the recording process of the album took six weeks and the album was produced by Michael Wagener.[3] The album’s first single, “Wait”, was released on June 1, 1987, but did not make waves until MTV began airing the music video in January 1988, seven months after its release, pushing the single to #8 on the Billboard Hot 100. In August 1988, more than a year after the album’s release, the second single “Tell Me” also featuring a music video hit #58. Pride’s third single, a gentle acoustic ballad titled “When the Children Cry”, made it all the way to #3, again with heavy MTV rotation of the music video, marking Pride one of just 20 hard rock albums to ever have multiple top 10 hits. The album peaked at #11 on the album charts. Pride would remain on the top 200 Billboard album charts for a full year.

The success of “When the Children Cry” would eventually push sales of Pride over the two million mark in the US, achieving double platinum status.[4]In addition, guitarist Vito Bratta was recognized for his instrumental talents by racking up Best New Guitarist awards with both Guitar World magazine and Guitar for the Practicing Musician magazine.

All You Need Is Rock ‘n’ Roll was the fourth single released from the album.

Tramp considers Pride the best White Lion album because he feels he and Vito Bratta existed as “one person” when writing the songs, and the band was at its prime at the time.[5]