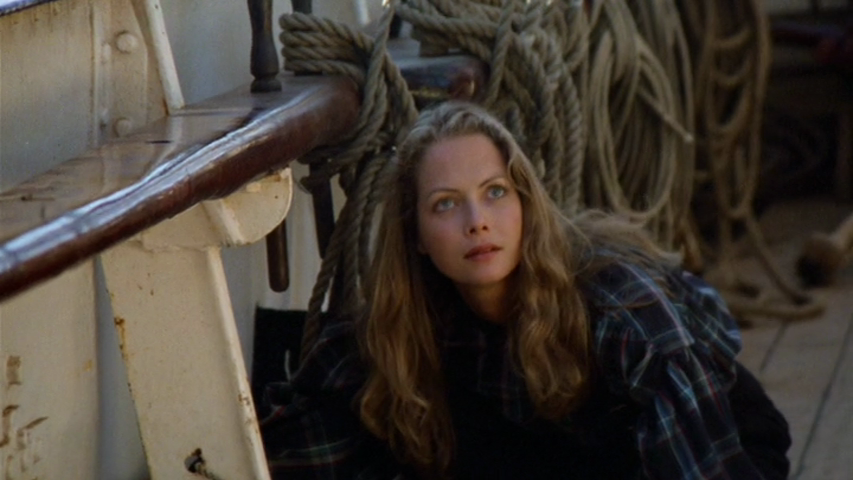 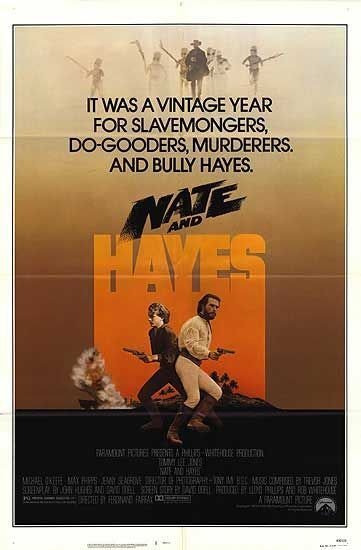 Big “Bully” Hayes tells his story to a writer hours before he is to be executed. He had been busted and betrayed by repugnant Brit Ben Pease (whose balls he had “shot off” at some point in the back-story) after trying to sell guns to backward natives on a remote island. He talks about the time he had been paid to ferry Reverend Nate (Michael O’ Keefe, wearing a ridiculous hat) and his intended, the gorgeous Sophie (luscious Michelle Pfeiffer lookalike Jenny Seagrove) to an island in the South Pacific his Aunt and Uncle govern.

Sophie hints she’s warm for “Bully’s” form (he’s kind of like the bad boy all chicks dig), but before she can do anything about it, the wedding is interrupted by the sleazy Pease and his cohorts, who murder Nate’s family, leave him for dead, and abduct Sophie so he can sell her off to a Samoan king. “Bully” comes back (presumably to liberate Sophie from her impending domesticity) but he discovers the island has been ransacked and the peaceful villagers have been taken away to be slaves. Meanwhile Nate, assuming “Bully” to be the principal architect behind the massacre, sets off to exact revenge.

After several days without food and water, he very nearly dies, but he is then rescued by Hayes. They join forces to rescue the (improbably) brave Sophie, who has to fend off Pease, his men, and and an inept German Count (Grant Tilly). The reason I say Sophie is improbably brave is because her character is obviously written to be, while no-nonsense and a realist, of aristocratic background and something of a porcelain doll, but because of our burgeoning feminist sensibillites (for the time) and a script co-written by John Hughes, she comes over as a tough chick. I don’t have a problem with it because it feels natural. If anything his script is stronger for it’s anachronisms.

The movie was, inexplicably, renamed Savage Islands (perhaps to cater to fans of exploitation movies), produced as a “tax shelter” movie with New Zealand money, and then sold to Paramount as a negative pick-up, which may explain the spotty distribution of the film to other formats. This is one of a handful of movies to trigger the MPAA’s PG-13 rating due to scenes of graphic violence too intense for children. Obstensibly an attempt to cash in on the action and pulp adventure boom of the early ’80s, the film failed at the box office.

Nate and Hayes was my “white whale” for a time in pursuit of those hard-to-find movies that received endless play on cable television.  This was a movie I spent years trying to track down, and even existing in chunks at places like YouTube, those chunks were soon deleted.  I finally gave up and found a VHS tape of it thanks to Captain Ziggy.  I thought I was getting a well-worn tape, but imagine my surprise when I find the Captain had sent me a sealed Paramount Home Video tape made in 1990 (possibly the last time the film was released on VHS for home exhibition)!  There are two other “white whales”; one film I managed to find, the other is still elusive.

Special thanks to Captain Ziggy!