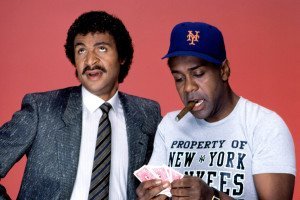 Felix Unger: What do you dream about?
Oscar Madison: Living alone.

When M*A*S*H* premiered in September of 1972, it was already in danger of cancellation due to low ratings and a weak first season time slot. The show, in it’s early days, boasted of a quasi-documentary format, with no laugh track and a cinematic visual style. The series, as originally developed, closely mirrored Robert Altman’s freewheeling adaptation of Richard Hooker’s cult novel. The second season’s improved time slot and introduction of a controversial laugh-track and more zany comedy contributed to the show’s enduring appeal. The show’s series finale is still television’s highest rated, most watched episode in history.

When M*A*S*H* gave up the pretense of trying to imitate it’s innovative motion picture source material and embrace a traditional television narrative, ratings went up. The show remained on the air for twelve years. The same can be said of a show like Happy Days, which began in 1974 as a single camera comedy with a laugh track. After the first season, the show was then shot in front of studio audience and achieved it’s greatest success. Producer Garry Marshall adopted this policy after changing the production format of The Odd Couple, a series based on the stage play written by Neil Simon. He would continue this practice for his later shows, Laverne and Shirley and Mork & Mindy.

Never a ratings smash, The Odd Couple was cancelled at the end of every season of it’s five-year run; a common television network tactic to keep costs down. Tony Randall (as Felix Unger) and Jack Klugman (as Oscar Madison) were established television and movie stars and accordingly, drew higher (than usual for the time) salaries. Ratings would go up in the summer when reruns were broadcast. Klugman and Randall were nominated for Emmy Awards every year of the show’s run. Klugman won two Emmy Awards, and Randall earned one. Although, the show was arguably a greater success than that of the stage play that inspired it, The Odd Couple was finally cancelled in 1975.

Six years later, a writer’s strike to attain compensation from the burgeoning pay TV and home video markets threatened to cripple television and movie production. The ABC network dusted off old scripts from the original show and quickly packaged an updated version of The Odd Couple starring Barney Miller’s Ron Glass as Felix, and Demond Wilson (from Sanford & Son). Episodes were quickly shot, but the strike was tentatively settled in July, 1981. Half a season’s worth of episodes were already in the can, and the show aired over a year later.

1982’s The NEW Odd Couple is a lethargic and lumbering re-write of the original series and while Glass and Wilson try to serve the material, they simply lack the chemistry of Randall and Klugman, and Walter Matthau and Jack Lemmon from the movie. Being that the series cribbed entire episodes from original scripts, it lacked the spontaneity, wit, and energy of the performers and the production team from the 70’s show. The show was cancelled after 18 episodes had aired.

ABC was still the most popular network, far and away from it’s competition. NBC had just launched Family Ties, Cheers, Buffalo Bill, and Silver Spoons. CBS premiered Gloria and Square Pegs, but had old, dependable horses like Dallas, Magnum P.I., Simon & Simon, and The Jeffersons. ABC premiered Matt Houston, Tales of the Gold Monkey, and The Quest, but still owned broadcasting rights for Monday Night Football, as well as Fantasy Island, Dynasty, The Love Boat, Three’s Company, 20/20, and T.J. Hooker. In a few short years, all of these shows would be cancelled. NBC would come to dominate television from the end of the decade on, and CBS would cultivate a reputation for programming with an older audience in mind.

Forty years on, The Odd Couple remains a staple of syndicated programming. It was one of the first “edgy, quirky” situation comedies set in New York City and justifiably boasts of influences to later shows like Seinfeld and Friends.