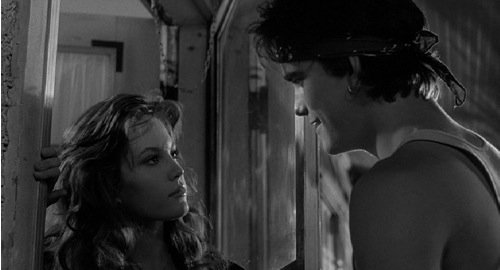 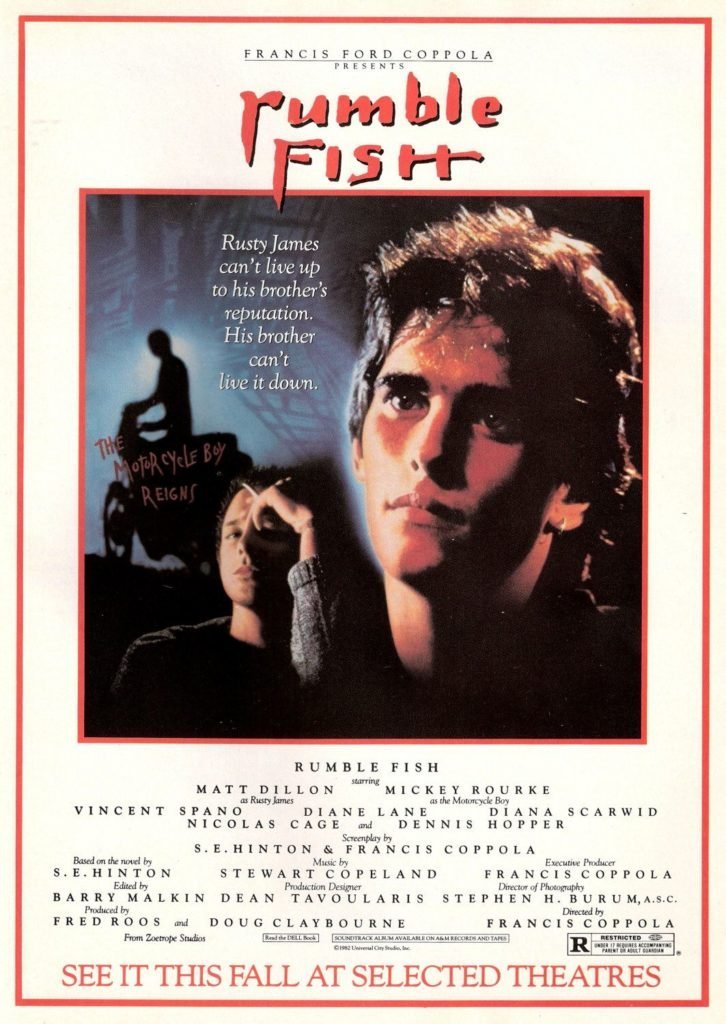 Rumble Fish is a world unto itself; black & white with interesting splashes of color (represented in the Fish of the title).  Mickey Rourke’s “Motorcycle Boy” and his little brother, stare longingly into the underwater world and make play with colorful fish in an aquarium tank.  The characters long to be free, to be “in color” while we note the fish are not “free”, but trapped in the devices of Man.  Fish don’t rumble, therefore fish cannot be Man.  While S.E. Hinton’s excellent novel does not care for the fish, Francis Coppola’s exquisite, beautifully photographed (bearing striking similarity to live television production) seems preoccupied with the notion of using the fish as a metaphor for Man.

Laurence Fisburne walks into Tom Waite’s pool hall and tells young Rusty James (Matt Dillion) he’s gonna get killed by a rival.  Dillon’s buddies, Chris Penn and Nicolas Cage wonder about the Motorcycle Boy, and Dillon tells them he might as well be dead.  His four-eyed friend, Steve (Vincent Spano) doesn’t think he should get into any more fights, and exists as Rusty’s fractured psyche talking back to him.  Rusty has been living in the shadow of his older brother for a long time.  He makes out with his girl (Diane Lane) and fends off the advances of her younger sister (Sofia Coppola) as Fishburne and company wait for his arrival at the designated meeting place: the railroad tracks.

The ensuing “rumble” plays as a variation on West Side Story.  The opponents are dressed in stark blazers that recall mods and rockers.  The fight is overly choreographed to appear as dance.  At the climax of the fight, the Motorcycle Boy appears and tends to his wounds.  Motorcycle Boy explains he was in California, and it becomes obvious Rusty lives through his brother.  Mickey Rourke is such an unusual actor.  Not conventionally good-looking, he has a soft-spoken quality, and a great deal of torment in his eyes, that I could not think of a better actor to play this part.  He’s almost like a ghost in this movie.  Because of that, there were inevitable comparisons to Motorcycle Boy when he appeared in later films.

From this point, the movie is a series of episodes, usually involving Rusty’s misdirected anger, negotiating his uniform fantasies of his girlfriend, Motorcycle Boy’s strung-out substitute teacher girlfriend (pathetic Diana Scarwid) and his older brother’s impossibly high standards.  Turns out Motorcycle Boy has grown, perhaps become a man, and where he traded his violence, he learned enough humility to stay out of jail but not enough to mercilessly criticize Rusty for the same choices he made when he was younger.  You begin to understand why they are the way that they are when you meet their father (a wired Dennis Hopper).  I’m reminded of Apocalypse Now where we had Hopper’s drug-addled lunacy completely in tune with Coppola’s vision of war.

I love the way Rumble Fish is photographed, but, even now, I can’t quite understand why Coppola chose to make this movie the way he did.  It harkens back to the first golden age of television with tight, stagey close-ups and scenery-chewing, but it’s a contemporary piece, with contemporary technology and automobiles.  Stewart Copeland’s interesting score is rife with sonic anachronisms.  The language is contemporary as well.  We try desperately to sympathize with Dillon’s character, but he’s a complete asshole, and he doesn’t deserve all the chances the people in his life give him.  Coppola made the much more successful The Outsiders (also based on an S.E. Hinton book) earlier in the year.