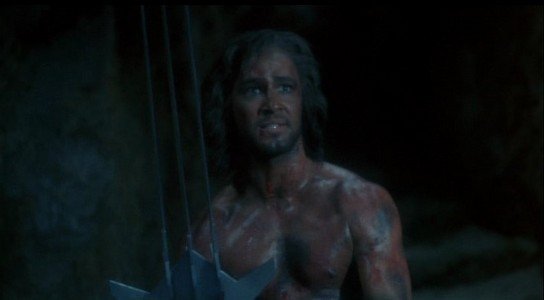 “We’ve got kingdoms to save and women to love!” 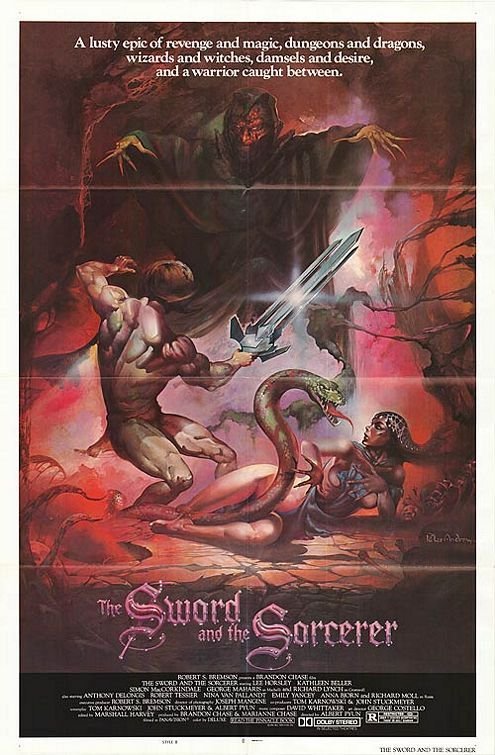 A couple of boats settle on a rushing shore. A frustrated and somewhat evil Titus Cromwell (Richard Lynch) commands his witch to summon a crazy mud-man with glowing eyes, Xusia of Delos, (this can only be Night Court’s Richard Moll) to help him defeat his enemies. In another corner of the word, King Richard rules his empire with the dual benefits of peace and mercy. Honestly, I don’t know he does it! Cromwell’s armies begin ripping through Richard’s land. Cromwell goes back on his deal with the mud-man and chucks him off a cliff for his trouble. I think he’ll be back. Ten minutes in, and we’ve got a lot of story. Richard sends his family away, but his son, Talon, (with a bad haircut) wants to fight. Richard tells him he must carry on, fight on the seas and oceans, fight on the beaches, fight on the landing grounds, fight in the hills, never surrender, or something to that effect. The young man (with a nifty projectile-launching sword) is hunted for years by Cromwell. He grows into the stunning specimen of manhood known as Matt Houston! I mean Lee Horsley. Pirate, slave, rogue. You name it. 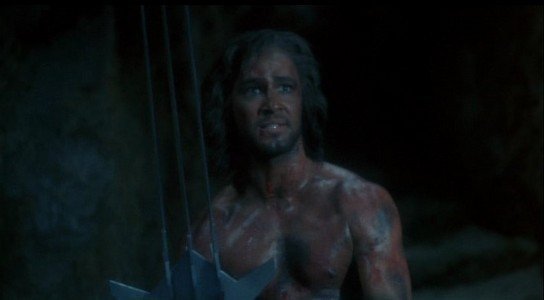 Meanwhile mud-boy Xusia is plotting his revenge on Cromwell. Don’t get it twisted. He is tight! There are stirrings of rebellion with Prince Mikah (Jaws 3-D’s Simon MacCorkindale), believed to be the rightful heir to King Richard’s lost empire, planning a revolt. All he needs is a few good men. The fully grown, fully coiffed manhood-oozing Talon is interested in only three things: money, food and women. God bless him! Cromwell gets the drop on Mikah due to his traitorous douche advisor. Mikah sends his sister Alana (Kathleen Beller) to warn the others, but she is waylaid by thugs who are then easily dispatched by Talon (all while eating a big cow leg no less). Alana hires Talon to rescue her brother. They haggle, but he seems more interested in sex, so she offers herself, but he expects his bounty, “perfumed and pretty.” Oh you man, you! Cromwell steals off with Alana, planning to make her his queen, regardless of whether she loves him or not. I’m glad relationships between men and women have evolved. Or have they? So now Talon has to rescue a prince and a princess. 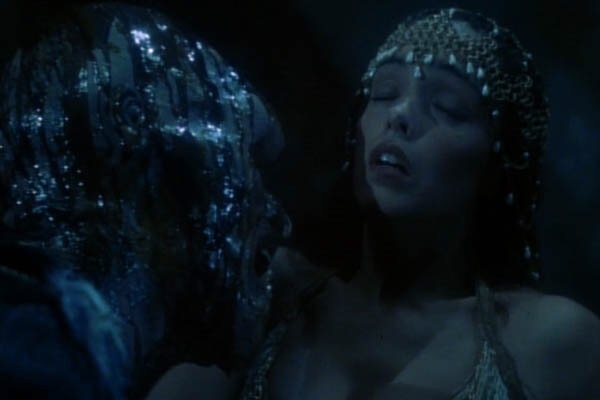 This is a damned fun movie. It’s a story George R. R. Martin wished he had written; concise and economical like The Neverending Story and a pathetic reminder of why movies fail to entertain these days. It looks as though certain scenes and shots were lifted from this movie to make Game of Thrones, which (I don’t care how much money was spent) pales by comparison. Beautifully shot by Joseph Mangine working with director Albert Pyun for his first movie, The Sword and the Sorceror is funny, sexy, and energetic. No easy feat. Pyun’s early work indicates his love for shadows and color, and an eye for framing and detail. Horsley is charismatic, and Lynch is a great mustache-twirler. The story recalls Jason and the Argonauts, Bert I. Gordon’s The Magic Sword, a little bit of Star Wars, and Clash of the Titans. It is often compared to Conan the Barbarian, the movie that kicked off the new wave of fantasy movies for the ’80s, but I see very little resemblance. As a matter of fact, I think I prefer this movie over Conan. and unlike the similar movie, Krull, this one makes sense.