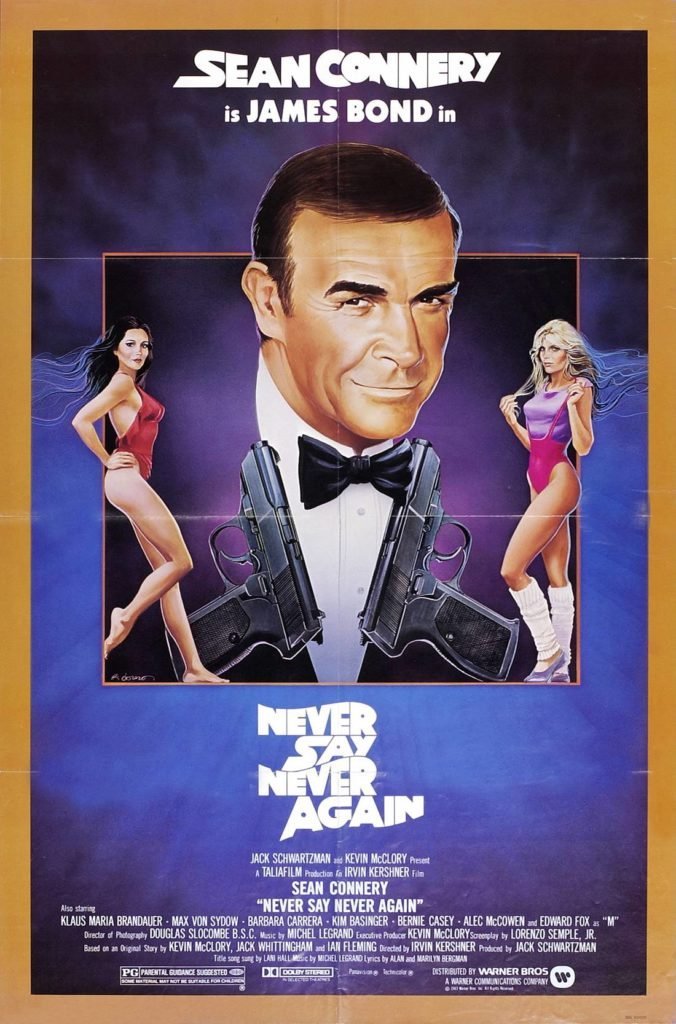 James Bond is not a character that exists for any particular generation; though different generations will banter back-and-forth about which actor gave the strongest performance as Great Britain’s most famous Military Intelligence operative. It’s like Coke and Pepsi. Dick York and Dick Sargent? Original or Extra Crispy? David Lee Roth or Sammy Hagar? Sean Connery or Roger Moore? As a matter of fact, in Ian Fleming’s original concept for the character, he envisioned someone who bore his own resemblance. A bit of wish fulfillment, perhaps? 1983 was an unusual year for our favorite secret agent in that we had two movies, Octopussy and Never Say Never Again, made by different production companies and starring Moore and Connery. Ultimately, as box receipts indicate, there was very little difference in their respective appeal. Octopussy earned $183 million worldwide, compared to Never Say Never Again’s paltry $160 million*.

Essentially a remake of Thunderball, but updated to accommodate Connery’s advanced years, Never Say Never Again came about because Kevin McClory (one of Thunderball’s writers) retained the rights to the film after a dispute with fellow writers Jack Whittingham and creator Ian Fleming. This left Thunderball as the only existing Bond property to not be owned outright by Fleming or “Cubby” Broccoli’s Eon Productions. Bond is compelled by his employers to spend time in physical rehabilitations after failing a wargame simulation. While there, and after bedding down one of his nurses, he spies (he can’t help it) a masochistic therapist, Fatima Blush (Barbara Carrera) dispensing a little more than medicine to a US Air Force pilot (Gavan O’Herlihy), whom she is using to circumvent the President’s security clearance in order to obtain two nuclear warheads, which SPECTRE will use to wreak havoc with NATO. Bond tracks the warheads to the Bahamas, where he runs afoul of oddball villain Largo (Klaus Maria Brandauer) while romancing Largo’s lover, Domino (Kim Basinger), who also happens to be O’Herlihy’s sister.

Bond beds Blush, who then betrays him to sharks while scuba diving. Thankfully, sharks don’t know how to open doors in underwater ships. Largo is a little nutty. He challenges Bond to a unusual, but interesting looking three-dimensional video game that utlizes nuclear missile to neutralize their targets. The loser donates proceeds to a children’s charity. Bond always seems to get the upper hand in these games, and he cleans Largo out. Largo captures Bond (and Domino) after Bond tells her the truth about what happened to her brother. He locks Bond in a North African dungeon and ties Domino to a post to sell her to Arabs on horseback. Like I said, he’s a little nutty. Bond escapes his binds with a laser-shooting wristwatch (how come they never frisk him?) and rescues Domino, who avenges her brother’s death (with a well-aimed harpoon) before Largo can arm his warheads.

It’s a fairly simple story, complicated by numerous distraction; those being the women in the film, who serve as impediments (if you choose to designate them as such) to Bond’s goals. Kershner (as he did with The Empire Strikes Back) emphasizes performances over action set-pieces, but his camera always finds interesting places to shoot. Connery’s Bond is more menacing, predatory, and pragmatic than Moore’s civilized charm and manners. The Blofeld character (popularized by Donald Pleasance and Telly Savalas, and more recently Christoph Waltz) is minimalized here, but played very well in this movie by Max Von Sydow. The real villains in this piece are Brandauer and Carrera. Brandauer is a curiousity. He plays his scenes with a child-like glee, keeping everybody around subtly off-balance. He looks like he’s always on the verge of snapping.

Now we come to the inevitable comparisons. Watching both movies (Octopussy and Never Say Never Again) with my wife, she told me she preferred the Connery movie, because the story was more contained, less expansive, and less tedious than Octopussy. I disagree. While expertly photographed and edited, this is a less cultured Bond, and there seem to be fewer locations and less color than Octopussy. Indeed, the movie is even shot, edited, and paced like one of Connery’s early Bond efforts. When I tune into a James Bond film, I expect exotic locations, beautiful women, and great action sequences, and while Never Say Never Again definitely delivers those elements, it doesn’t deliver enough of them. It’s as if the producers expected only to secure Connery’s involvement and not much else, but it is interesting to speculate (based on this movie) how the Bond series would’ve continued with Connery playing the character. That being said, I’m glad Connery retired when he did. Where Moore was a bit stuffy, Connery is smug and (somewhat) unlikeable, regardless of how many creepily young women he beds in this movie. Also, the film feels naked without the signature (and trademarked) John Barry theme music and credit sequence.