“I always tell the truth, even when I lie.” 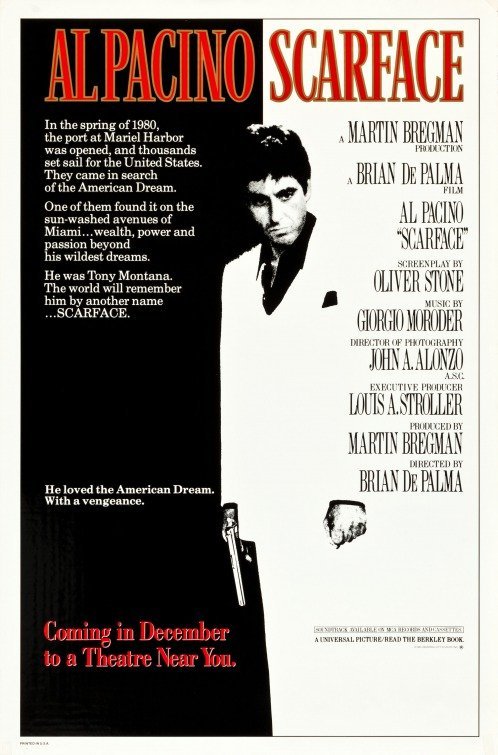 Let’s get the history out of the way first. Between April and October of 1980, 125,000 Cubans emigrated to the United States. Not knowing whether these Cubans represented their nation’s best and brightest, or if they were common criminals discarded by Castro’s regime, our government housed them in prison-like Little Havana communities, while they awaited vetting, processing, and eventual naturalization. Fictitious Tony Montana (electrifying Al Pacino) is one of these detainees. He and his friend Manny (Steven Bauer) are given green cards after executing a former high-ranking Cuban politician. Tony lectures his friend about the “American dream”, which boils down to money, power, and respect.

Scarface’s narrative is fairly straight-forward from there. Tony rises to power as a drug kingpin. Unlike his cronies, he possesses a sense of honor. He refuses to bow to notions of mindless revenge. He will not kill innocent people (i.e. women and children). He is fiercely protective of (as well as harboring incestuous desires for) his young sister, Gina (Mary Elizabeth Mastrantonio). When his friend, Angel, is killed in a drug burn, he suspects his employers, sleazy Omar Suarez (F. Murray Abraham) and Frank Lopez (Robert Loggia). Suarez is killed by cocaine supplier Sosa, and when Tony starts making deals without Lopez’s approval, Lopez tries to kill him. Tony kills Lopez, marries Lopez’s girl, Elvira (Michelle Pfeiffer), and takes over the business.

From there (and with the help of montage), Tony Montana becomes the go-to-guy for cocaine. Growing increasingly paranoid from his own cocaine usage, he builds a custom state-of-the-art counter-surveillance system, and his mansion is built like a fortress. He alienates his friend, Manny, and berates his wife for her own burgeoning cocaine addiction. Don’t get high on your own supply, Elvira. When Tony is threatened with jail time for money laundering and tax evasion, Sosa steps in to offer him a solution, if only he will have an influential journalist killed. Tony refuses when he sees he is required to kill the man’s wife and children. Sosa retaliates, sending hit squads to his mansion.

Scarface was unfairly marginalized during it’s initial release. Critics believed the film to be a glorification of excessive violence, while advocacy groups protested the film’s depiction of Cubans (prompting a hastily-added disclaimer at the end of the picture). The MPAA certified Scarface for an X rating three times before cuts were made to the infamous chainsaw scene, although to hear director Brian De Palma tell the story, he made very few edits to the scene, which was played and photographed more for tone than explicit violence. Over the years, Scarface has attained an enormous cult following. Pacino’s Montana character struck a chord with disenfranchised hispanic and black youth, as well as becoming a huge influence on most crime-drama films being made today.

Coming out at a time when it did, Scarface was not quite a transitional piece for De Palma. A year later, he would make Body Double, still absorbed in “Hitchcockian” motifs and themes while retaining his talent for individuality as a filmmaker. His “Hitchcockian” period had started in 1973 with Sisters, as well as directing occasional studio projects such as Carrie and The Fury. Watching Scarface, one can sense the bending (if not breaking) of the chains of style. De Palma utilizes shots and cinematography evoking Hitchcock (the use of cranes and back projection), bold primary colors and fascinating fashion choices meant to make his characters stand out in eloquent composition. Watching the movie (for the umpteenth time) with my wife, I was instantly reminded of scenes from Frenzy and Torn Curtain.

Scarface originally premiered on The Movie Channel in 1984 as part of a Brian De Palma retrospective, which included Carrie, Home Movies (a personal favorite), Get To Know Your Rabbit, Phantom of the Paradise, and Dressed to Kill. A few of these films will pop up in Vintage Cable Box. In addition, The Movie Channel ran the original 1932 Scarface with Paul Muni for comparison.