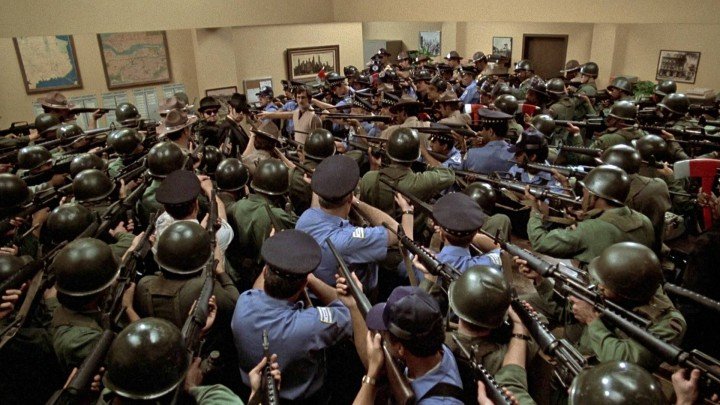 “We’re so glad to see so many of you lovely people here tonight. And we would especially like to welcome all the representatives of Illinois’s law enforcement community that have chosen to join us here in the Palace Hotel Ballroom at this time. We certainly hope you all enjoy the show. And remember, people, that no matter who you are and what you do to live, thrive and survive, there’re still some things that makes us all the same. You. Me. Them. Everybody. Everybody.” 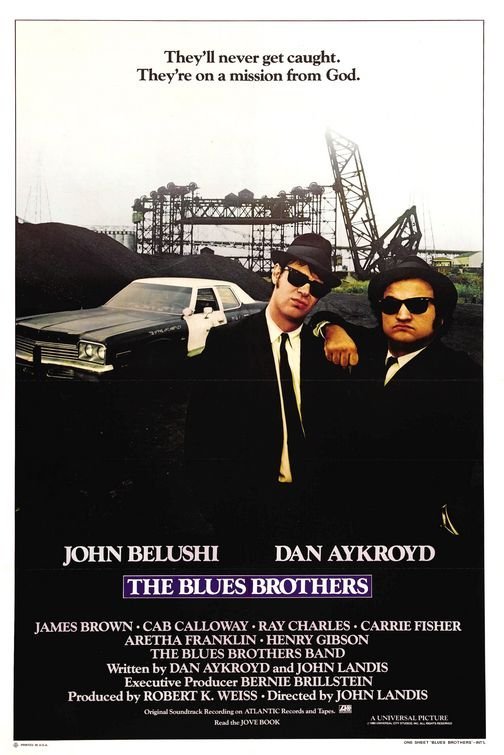 So Jake (John Belushi) got pinched and served three years of a five year stretch  at Joliet Correctional.  His brother, Elwood (Dan Aykroyd) arrives to pick him up.  They greet each other and take off in Elwood’s souped-up cop car.  He traded the old (legendary) Bluesmobile for a microphone.  First stop is a visit to the Penguin.  Not the umbrella-toting supervillain, but a nun (Kathleen Freeman) from the orphanage where the Blues brothers grew up, who informs them she (and the Lord) are displeased with Jake’s incarceration.  She also tells them the County Assessors Office has tendered a bill for the property in the amount of $5,000.  This is when Jake gets it into his head that he and his brother are on a “mission from God” to save the orphanage.

Their next assigment is to get the band back together.  The band (composed of Tom “Bones” Malone, Donald “Duck” Dunn, Lou Marini, Matt “Guitar” Murphy, Steve Cropper, “Mr. Fabulous”, Willie Hall and Murphy Dunne) had splintered off after Jake’s incarceration.  Some formed their own lounge band, while others retired completely and took up respectable jobs.  I’m convinced (after I don’t know how many viewings), Jake’s true talents are reserved for manipulation and charm.  He convinces the guys to get the band back together.  He obviously charmed an unhinged “Mystery Woman” (Carrie Fisher) into marrying him before ditching her at the altar.  He extorts their former manager, Maury Sline (Steve Lawrence) into finding them a hall and promoting a performance that will yield at least $5,000 in gate money.

What we next witness is truly a comedy of errors and escalation.  Everything that goes wrong gets worse.   Everything that goes bad becomes terrible.  Jake’s Mystery Woman is thwarted on several occasions, attempting to kill him and his brother with an escalating series of weapons (including machine guns, flame-throwers, and explosives).  Jake and Elwood run afoul of the Illinois Nazi Party (headed by Henry Gibson) and an errant country/western band called The Good Ol’ Boys (with frontman Charles Napier), not to mention corrections officers, cops, state troopers, and the National Guard.  Of course, all of this could’ve been avoided if Elwood had not run a red light one night on an open road in Cook County, and I have to wonder if this is truly a “mission from God” since there are so many obstacles put in Jake and Elwood’s path.

On the night of the big show, they have to sneak in to their own gig, where they play two songs and then beat a hasty 106 mile retreat back to Chicago so they can pay the Assessor’s office before they get arrested.  Bringing up the rear are the cops, the angry musicians, and the Nazis.  The stunt-work and car crashes exponentially increase and I wonder if this is why Aykroyd and co-writer/director John Landis wanted to make the movie.  The Blues Brothers exists as a separate entity when compared to other movies with regard to characters from Saturday Night Live.  The Blues Brothers characterizations were not controlled by Saturday Night Live creator/producer Lorne Michaels, therefore he had no creative input on the project.  This was an oversight he would correct for future film productions. 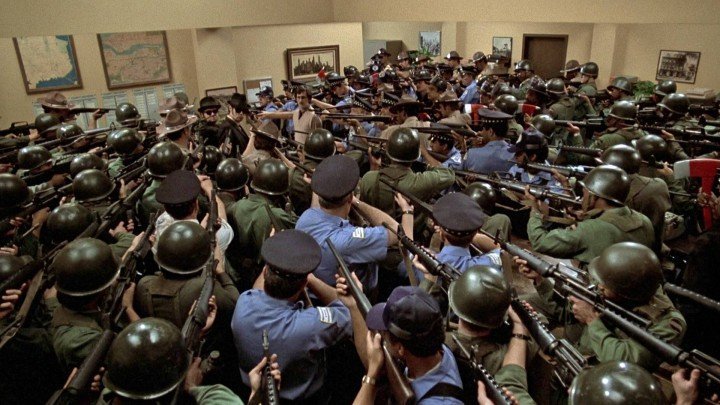