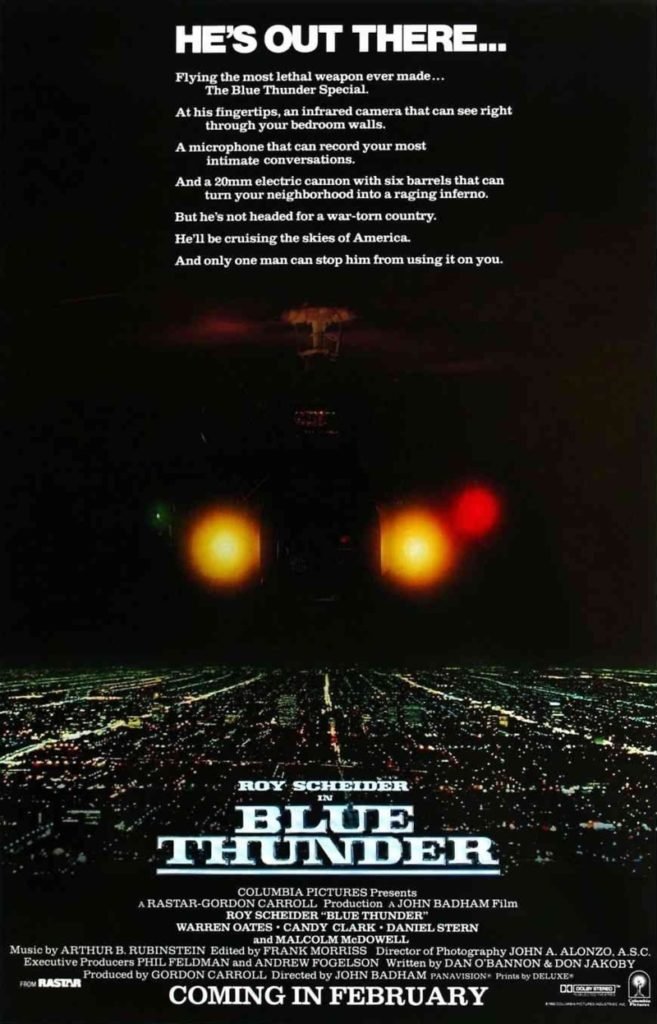 The disclaimer at the beginning of Blue Thunder swears up and down that the technology used in the film is real. So, it’s really more of a “claimer” and strikes at the very heart of director John Badham’s paranoia with regard to new technologies. It isn’t so much that there are whisper-quiet helicopters and other advanced weaponry utilized by the Military, but that these technical marvels can be used for more nefarious, fascistic purposes like spying on citizens and controlling the population. Hot-shot Vietnam veteran Roy Scheider and scruffy young partner Daniel Stern are helicopter cops (or”heli-cops” – neat huh?). I’m not sure how long helicopters have been in use for law enforcement. We hear them once in a while around here, and because of this movie, I tend to draw the shades. When Scheider and Stern aren’t busting the scum of Los Angeles, they’re checking out naked ladies doing naked yoga in skyscrapers. This is a fun job! Shenanigans are interrupted by a rape-in-progress and Scheider and Stern come to the rescue.

I still don’t understand the level of effort rapists put into their work, and this is after I had to watch five Death Wish movies for Extreme Cinema. Crabby boss Warren Oates (in his final film role) busts Scheider’s balls (and deservedly so) for peeping on Encino’s hottest, and Scheider suffers ‘Nam flashbacks – a lot of them involving rival pilot Cochrane (mustache-twirling douche Malcolm McDowell). This goes to Hell pretty quickly. The woman who was raped turns out to be a big-shot congresswoman and political big-wig. She was shot in the process and died in the hospital. Roy is taken to a top secret government installation where he inspects a brand new experimental helicopter called “Blue Thunder.” In the test, the helicopter maneuvers remarkably well, and mows down targets efficiently. Test pilot McDowell misses a lot of targets and cuts down mock-ups of innocent civilians.

Scheider goes on a test run with McDowell. McDowell sabotages his helicopter for no reason other than to kill him, but we didn’t need this detail to know they have mutual hatred for one another. We get that McDowell has an axe to grind, but does he have to be completely evil? There’s no talk of “the greater good,” or the need for advanced firepower. The movie is just one big thrill ride. Scheider and Stern get under the blades of “Blue Thunder,” and go on a test flight to check out the hardware, which includes highly-sensitive microphones and video recording technology. Once again, they use this incredible technology to check out girls, and listen to their cop buddies have sex. While snooping in the Federal database, Scheider discovers a connection between McDowell and the mysterious Project THOR. They tail McDowell to the Federal Building in downtown Los Angeles. They record a clandestine conversation between McDowell, some Defense Department cronies, and one of the participants in the politician’s murder.

They all agree to “delete” Scheider, and they kill Stern. This is gripping! They pin Stern’s murder on Scheider, and Scheider is suddenly a man without a Country. Before he was killed, Stern hid the incriminating tape for Scheider, who gets his able-bodied girlfriend, Candy Clark (telegraphed early on driving like a maniac), to retrieve the tape (from a drive-in movie theater dumpster) and get it to a television station in a brilliantly edited and suspenseful sequence. This leads to some amusing helicopter battles, and what floors me is that all of this was done without the use of green screens or digital computer effects. Blue Thunder ends with a thrilling helicopter fight between Scheider and McDowell that leaves most of Los Angeles in ruins. This is a seriously exciting movie, directed by Badham, who would shortly follow-up this movie with WarGames (another techno-horror movie) less than a month later!