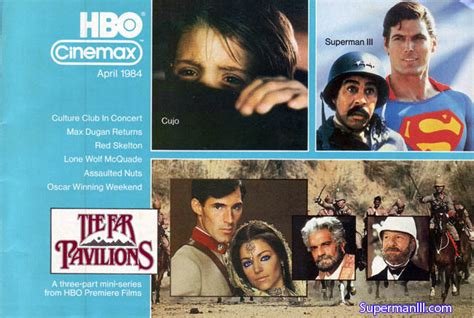 I started the Vintage Cable Box series at the end of August, 2015. The series bowed with entries for Wes Craven’s Swamp Thing, the Rodney Dangerfield vehicle, Easy Money, and the Citizen Kane of teen sex comedies, Porky’s, directed by Bob Clark, who would later, inexplicably, bring us A Christmas Story (though both movies shares a nostalgic connection in their themes). Over 200 essays later, it’s finally time to pull the plug, and I thought I’d take this time to answer some questions and fill you in on my thought process. Cable television was an incredible oasis at the time; we’re talking 1984 through 1986, two short years. Growing up poor in Cincinnati and then Philadelphia, my Mother had a job opportunity in Tennessee, the State of her birth, and she thought we should live near some family at that time, so we moved down there in the late Spring of 1984.

Philly had no cable in certain neighborhoods, usually anything below Broad Street in the “historic” sections of the town. Cable lines were considered unattractive and would detract from the beauty of the older neighborhoods. This has since been rectified with underground lines, but back then all you had were roof antennas, rabbit ears, and aluminum foil to improve reception of the 12 channels you were granted, three of which were VHF networks, and the rest were independent UHF sources. Add to that the fact we didn’t get our first VCR until probably 1986, so the television was practically a miracle sent down from heaven. We had a 19-inch RCA Colortrack on a rolling stand until I spilled chocolate milk into the back of it, and then all of our television came from a 12-inch black & white Sylvania. It cost $200 to have the television repaired (back then you had to have your electronics repaired), so we took it down to Tennessee with us, and then my Mother invested $125 in a used 25-inch Magnavox color console. It was magnificent.

This is how I close every Vintage Cable Box article:

So we come from a place with only 12 channels to a place with over 30 channels. Imagine the switch-over. This was the premium package. Compare it to today. I was looking at the cable box channel guide the other day. It isn’t just one HBO channel, it’s six. It isn’t just one Cinemax channel, it’s six. It’s East Coast feeds, and West Coast feeds. Forty sports channels. Twenty cooking channels. It’s countless news channels. In 1984, we were overwhelmed. In 2018, we’re drowning in entertainment options. I only wished we had a VCR, because I felt then (as I do now) the analog picture and sound was perfect. Cable television picture quality was much better than VHS/Beta quality. For a time, we had HBO and Cinemax, and The Movie Channel, which was probably my favorite for offering an incredible assortment of films and film festivals. This was my film school education. Every filmmaker would say if you wanted to know how to make films, just watch films. Technique comes from another place; the source of inspiration and style built somewhere in your psyche, and you can’t learn that in a school setting.

I dug in, and this is where my love affair with movies began. I make it a point to watch every movie I choose to include. Some movies were more difficult to find than others. Some movies were so terrible I didn’t want to continue watching, but I stuck it out for the sake of veracity. As I write this, I’ve just finished writing my review for 1981’s Rollover. I have a good set-up in the bedroom for watching old videotapes; a big-screen CRT* and a 4-head (admittedly mono) Sansui VHS VCR. Sometimes if a movie is available in a superior format, and reasonably priced, I’ll grab it, but I do try to stay as close to the time period as I can. I’ve given some movies much more time than they deserve (i.e. Screwballs, Jekyll & Hyde Together Again, They Call Me Bruce?). Other movies (personal favorites) were written on “auto-pilot” because I knew them so well. I could quote dialogue and remember key edits. There is also the sad fact that some movies get more promotion and rotation than others, and continue to be enjoyed today, while others disappear down a rabbit hole of bad production deals, shady financing, and limited distribution (i.e. Get Crazy, Somebody Killed Her Husband).

I’ve received an enormous outpouring of praise from readers, as well as suggestions. I do take suggestions, but it’s usually when I’ve forgotten a title that did play endlessly on cable television within that admittedly brief window of time and, more importantly, when I’ve actually seen the movie in question. Vintage Cable Box is mostly about my remembrances of those years. On occasion, a reader will suggest a title, and it will not be representative to me of a movie I remember in the rotation of cable television. There were tiny little movies that played constatntly on cable television, like The Sender or Midnight Madness. There were big box-office blockbusters. There were the flops. As I write this, I’m reviewing Smithereens and Rollover, two very different movies. In that brief time period (1984-1985) cable television was an incredible, eclectic, diverse collection of unique entertainment, and most of it was exceptional. Sadly, it isn’t like that anymore. Cable television is a thousand channels, a lot of it prescribed in an algorithm-like fashion, designed to cater to the entertainment needs of a vast audience that does not include the likes of me. It’s so boring. Or perhaps, because there are so many choices, I’m not in a hurry to watch. In the old days, we didn’t have a VCR, so we had to be there – at a specific time, tuned to a specific channel, to watch a movie.

Consider the VCR. We laugh at VHS and Beta now. I did a whole series about the history of home video with David Anderson. In those days, it was the quite the coup to have all three Star Wars movies on tape playing through your old CRT. It mattered. Now we laugh because we have high definition, big screen. A movie theater in your living room! It’s amazing. How soon we forget. We also forget that too much of anything reduces value and appreciation. Now that we have so many choices, we stop caring about times and places. We won’t rush home so we can have dinner ready and watch our favorite show. Instead, you program the DVR, and take your time doing whatever you want to do. A couple of buttons pushed and I can record a whole series. In case I forget to record a whole series, I can just watch anything I want “on-demand.” No wonder we’re all getting fat!

There were titles I had considered reviewing but ultimately decided not to review. Tom Cruise comes to mind. He would be an obvious choice to evaluate because his work was crucial to the early days of cable television. He had a small role as Steve Randle in Francis Ford Coppola’s The Outsiders. After that, he appeared in Losin’ It (which I did enjoy) with Jackie Earle Haley and Shelley Long, and then Risky Business and All the Right Moves made him a huge star. Cruise wouldn’t explode in his popularity until the mid ’80s with Top Gun, Rain Man, and Born on the Fourth of July. He was little more than a teen heartthrob at the time I was watching cable television; the time-line of that very small window was crucial to my choices for the column. I think the ’80s was a time of Dudley Moore and Steve Guttenberg, teen sex comedies and slasher movies, John Carpenter and Steven Spielberg (though I don’t recall reviewing any Spielberg movies for Vintage Cable Box – it was another matter of time-line). Obscure titles were what I sought out originally. I thought about The Buddy System and Nate and Hayes, WarGames and Psycho II, Get Crazy and Rhinestone, not Tom Cruise.

I learned a few things, too. I learned that the (comparatively) smaller brain of the eleven or twelve year old child compared to that of a forty-five year old adult is much more willing to fill in the blanks of a shoddy narrative or a bad performance or a balls-out terrible movie than viewed through the narrow, rigid scope of maturity. I find I have very little time in my life now to throw caution to the wind and look at every movie coming out. My prejudices will extend to comic book movies and big-budget blockbusters; those movies are simply not made for me. In fact, I tend to look upon those my age who enthusiastically watch comic book movies with some degree of either pity or derision. Where I was willing to give a movie like Screwballs a chance when I was twelve, I won’t even watch a new Jurassic Park movie these days. I just don’t have the time to waste on dinosaurs, or talking raccoons for that matter. It all feels so ridiculously disposable. That’s what has happened to movies today. They’ve become disposable.

We come to the end of the journey. I did this for fun, but then I discovered I had regular readers. I want to thank each and every one of you. If there was one grievance from yours truly, it would have to be that I, in my estimation, wrote some really good material that wasn’t popular with readers because the movie I was writing about was not that popular. I could get big numbers on a title like Spacehunter: Adventures in the Forbidden Zone (in 3-D!), and tumbleweeds for The Big Chill, which I considered one my best written reviews. I don’t understand how that works, but thanks for reading all the same!