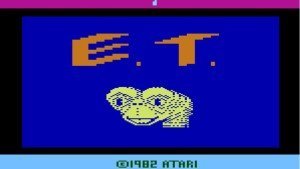 The first time I saw “E.T.” in a movie theater (it had to be 1983, my mother wasn’t interested so I had to beg), I couldn’t hear the movie as it played, because the kids were screaming in the aisles. My mother had to call over an usher and make the person try to quiet these crazy kids. Didn’t work. Still didn’t hear anything, so I had to watch the movie through the imagery. It works! It works almost like a silent movie, until you get those incredible John Williams musical swells of emotion, and you feel that lump in your throat that only Steven Spielberg could create. It’s such a gorgeous, amazing movie it surprises me to this day there are certain parties who have not seen it.

As such, an enormously popular movie will eventually get it’s own video game adaptation. It happens. We can’t fight it. The short of it was that Atari wanted to get in on the cash and the popularity of the movie, and have a video game version of the movie ready for consumers by Christmas of 1982, basically giving programmer Howard Warshaw five weeks to design and program the game. They had previous success with “Raiders of the Lost Ark” (success is subjective). With Spielberg’s approval, Atari’s “E.T.” ships to stores, and the initial projections show that this game will be a big hit. It flops. People don’t understand the game.

I tried the game at my friend Matthew’s house. We didn’t have any money, so we didn’t have money for a video game system, and to be honest, I was never terribly interested in video games, but I did try “E.T.”. The next best thing to not having your own toys is having a friend who has all the toys you don’t have – that way they’re your toys too, in a way. I liked other video games. I loved “Pitfall” and “Pacman”, and “Donkey Kong”, but I wasn’t interested enough to buy a video game system. I eventually purchased a Coleco video game system from a classmate who disposed of it by relieving me of my bus tokens from school. So I had to walk to school for four weeks to play “Donkey Kong”. I had a lot of energy back in those days. 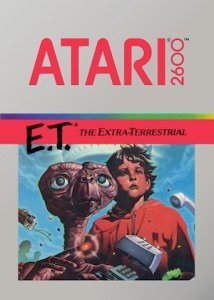 “Atari: Game Over” is the story of a scapegoat. In this case, Howard Warshaw. He was a young, brilliant engineer. He was slick. He partied in a way only a prodigy in the Reagan-era could party. He designed “Yar’s Revenge” (which I also remember, and really couldn’t grasp). He comes into Atari, at that point purchased by Warner Communications, makes a million dollars in development and programming, because in those days you get to keep your patent and still work for the godless corporate structure, develops a game for a popular property which flops, and then is smacked down so hard he becomes a psychologist and part-time religious guru for computer nerds in Silicon Valley.

So what happens when “E.T.” flops? Atari’s shares plummet. The company claims losses in excess of $180 million dollars and slowly folds. The next logical step? Bury the bodies out in the New Mexico desert, “Casino” style.  Not really. The other scapegoat of this museum piece is a holding warehouse, the retail end in this chain of fiascos. The warehouse can’t move Atari product, so they bury the product whole in Alamogordo, the site of an enormous landfill. The rest of  “Atari: Game Over” covers the excavation of these priceless (yet worthless) materials.

Of course, nothing like this would ever happen today. You’d get too many environmentalist nut-jobs preaching the evils of plastic, and the arrogance of Atari shipping 4 million copies of an untested video game, but it was the eighties, so let’s be kind. There were a lot of wealthy idiots running around back then not caring about the environment or matters of practicality. Champagne was free, and if you were over the age of ten, you got a free headband to wear when you went to aerobics class. I still have mine.

The documentary is interesting, but it doesn’t paint a complete portrait. The failure of “E.T.” was not the failure of Atari, or the home video gaming system of the time. It was Coleco, and Nintendo, and the eventual technologies that Atari did not take advantage of, nor would it, as evidenced by the rise of Commodore computers, the Apple 2E, and the connections consumers would make between personal home computing and the gaming industry. In short, Atari died trying to chase the tail of it’s own Lynx and Jaguar products. It had nothing to do with “E.T”, but the arrogance of dumping a product into a pit in order to ignore it, is troubling.

Now, in this hoarding, collecting culture, new parties emerge to spend big bucks buying garbage. When the games were unearthed, they were placed on eBay, and gen-Xers with, undoubtedly deep pockets and money to burn started buying. You can buy an “E.T.” cartridge taken from the Alamogordo landfill and place it proudly on your mantle-piece. One man’s trash is another man’s treasure. I’d really like to phone home right about now.