“That … tallywhacker had a mole on it. And that mole is the key to it.” 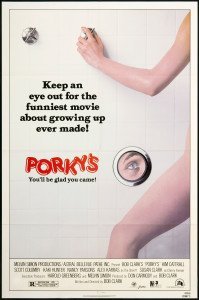 As a standard teen sex comedy narrative, “Porky’s” is based on repetition, and a curious parochial attitude in which something good (read: sexy) happens to one of our protagonists, and then almost immediately, that protagonist is punished for his pleasure. In one key scene (the basis for the poster, no less) our plucky heroes are spying on girls through peepholes in the shower. One of them decides to tempt fate by sticking his … ahem “tallywhacker” through the peephole. It is then that girls coach, Miss Ballbricker, grabs the offending appendage and pulls on it, causing our hero a respectable amount of pain.

“Porky’s” follows our teen heroes from one sexual misadventure to another. The story takes place in 1954. Imagine “American Graffiti”, but with significantly more skin. It’s a low-budget coming-of-age movie with a top-rate cast, excellent acting, photography, and a story that doesn’t condescend to, or patronize it’s audience (other than a haphazard subplot about bigotry, but I’ll forgive writer/director Bob Clark for that misstep). The movie was a tremendous hit for Fox, earning over a hundred million smackeroos at the box office, but it was on cable television that the movie’s success truly blossomed, as it were. While our parents forbade us from the pleasures of Pee-Wee and Wendy in the theater, they couldn’t stop us from checking it out on our vintage cable boxes! 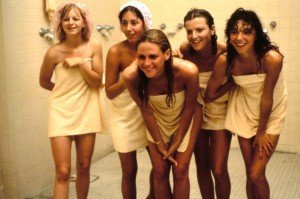 “Porky’s” was followed with two sequels, the competent “Porky’s 2: The Next Day”, and the dreadful “Porky’s Revenge” (with music from George Harrison!). Most memorable is the beautiful Kim Cattrall, hilariously nicknamed “Lassie” because of her penchant for high-pitched squealing during sex. Dependable character actors, Alex Karras and Susan Clark (from TV’s Webster), as well as Art Hindle, and Nancy Parsons, fill out the cast of mostly-unknown young actors. Bob Clark directed one of my favorite 70s horror movies, “Children Shouldn’t Play with Dead Things” as well as the perennial holiday classic, “A Christmas Story”. Sort of puts a different spin on “You’ll shoot your eye out!”