An eleven-year-old in the year of Our Lord, 1984. Hankins Drive in Lebanon, Tennessee. It was our first cable box. At first glance, a non-descript metal contraption with a rotary dial and unlimited potential (with no brand name – weird). We flipped it on, and the first thing we noticed was that the reception was crystal-clear; no ghosting, no snow, no fuzzy images. We had the premium package: HBO, Cinemax, The Movie Channel, MTV, Nickelodeon, CNN, The Disney Channel, and the local network affiliates. About $25-$30 a month. 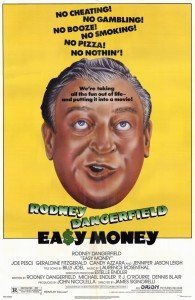 The resurgence of the classic screwball comedy started with “Arthur”, continued with “Easy Money” and “Trading Places”, and ended with “Brewster’s Millions”. The ne’er-do-well gets a shot at untold riches, ludicrous amounts of money, power, and respect but only if he or she can turn their life around. “Easy Money” follows the “Arthur” paradigm except that Rodney Dangerfield’s character already has a pretty awesome life. He smokes weed, he gambles, he drinks, he eats unhealthy food, he tosses money at big-breasted strippers, he bowls, he has fun. Yet, he’s happily married. His daughter is getting married, and he runs a business taking baby pictures.

Typical of this narrative, his mother-in-law hates him. There is a definite ethnic vibe running through the familial hostility. Uptight Irish in-law hates stereotypical Italian. When she drops dead, her executor makes note of a clause in her will which stipulates Rodney (or his family) doesn’t get a dime unless he changes his “evil” ways. Something on the order of $10,000,000! Where did this lady get that much green? So the movie spends some time showing Rodney getting increasingly frustrated as he tries to live a life of restraint (i.e. no fun) or else he won’t get the cash.

Rodney Dangerfield’s particular brand of humor, from “Caddyshack” on, bordered between obnoxious and likable, a happy schlub who carried a wild party in his back pocket everywhere he went. Considering his Al Czervik character in “Caddyshack” is another nouveau-riche elemental force and an annoyance to the uptight members of the country club, “Easy Money” could very well be a prequel. 1986’s “Back To School” could also fit into a trilogy of this character’s story. 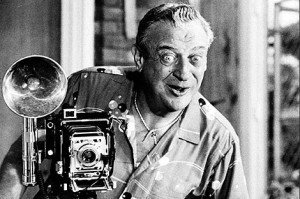 Post “Raging Bull”, pre-“Goodfellas” Joe Pesci plays Dangerfield’s best friend, Nicky. Jennifer Jason Leigh plays Dangerfield’s daughter, who is about to marry the sexually-ambiguous Taylor Negron. The director, James Signorelli, a frequent Dangerfield collaborator, produced over 400 films for Saturday Night Live. This is classic Dangerfield; a fun, sexy movie filled with large-breasted women (is it me or were breasts much bigger in the 80s?). Billy Joel performed the catchy title theme.