“Everything’s a dream when you’re alone.” 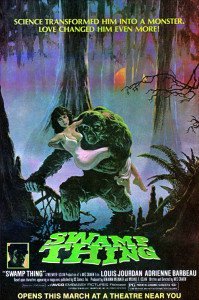 When I started writing reviews for the films which became the basis of this series, the original plan was to start with Rodney Dangerfield’s 1983 comedy, “Easy Money”, but after Wes Craven died, I thought it would only be fitting to pay tribute to one of my favorite horror film directors by looking back and trying to remember if there were any films he made that were shown on cable television during the time period Vintage Cable Box covers, and yes, there was “Swamp Thing” – a movie I truly adore.

Sultry government agent Adrienne Barbeau arrives in the Louisiana bayou to investigate Dr. Alec Holland’s (Ray Wise) experiments in bio-engineering with his sister, Linda. Holland has just made a major breakthrough. Louis Jourdan plays Arcane, a rival scientist who orders his men to attack Holland’s compound and steal his new formula. In the resulting firefight, Holland is contaminated with his formula and disappears in the swamp, presumed dead. Later, when Jourdan’s men try to kill Barbeau, Swamp Thing emerges to dispatch them.

Released a good three months before “Creepshow”, “Swamp Thing” adopts the same comic-book-with-a-movie visual sense, even down to the turning of pages and artwork panels for scene transitions. Craven’s screenplay is intelligent with a sense of humor and the performances (particular those of Wise, Barbeau, Jourdan, and Dick Durock as the titular hero) are wonderful. Based on Len Wein and Bernie Wrightson’s DC Comics series, the movie was made on an astonishingly low $3 million budget.

Henry Manfredini’s score recalls his work on the Friday the 13th franchise, with stings and twists, and Bernard Hermann-like trills. The editing is breakneck in the action sequences and appropriately slow in the more romantic and menacing scenes. The creature itself is a marvel, created by Bill Munns, who would also contribute ghastly creatures for “The Return of the Living Dead”. “Swamp Thing” is schlocky and pulpy, and pure fun to watch.

The early eighties was a time when filmmakers, presumably working on the edge of the mainstream, and outside of the borders of studio control, started getting bigger budgets. Wes Craven was primarily known for “Last House on the Left” and “The Hills Have Eyes”. “Swamp Thing” was his formal introduction to studio work. This was the same year Tobe Hooper made “Poltergeist” and George Romero made “Creepshow”, so a definitive New Horror renaissance had taken place.

Scream Queen Adrienne Barbeau appeared in John Carpenter’s “The Fog” and “Escape From New York”, and would later appear in “Creepshow”. Ray Wise would later star in “Robocop” and Twin Peaks (the television series and the movie). Stuntman Dick Durock appeared in the sequel, “The Return of Swamp Thing” and the spin-off television series, which ran for 72 episodes.

It’s impossible to estimate Wes Craven’s impact and influence on the modern horror movie. A creative thinker and intuitive director, Craven created intelligent horror movies that did not skimp on scares. After “Swamp Thing”, he would create one of the most popular franchises that rivaled only Jason in “A Nightmare On Elm Street”. “The People Under The Stairs” is my wife’s favorite movie of Craven’s. In 1996, he directed Kevin Williamson’s popular post-modern slasher movie, “Scream”, which yielded three sequels.