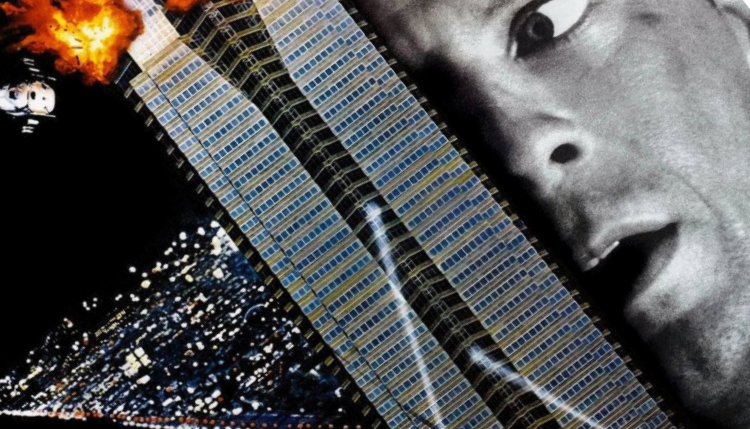 Moonlighting in 1984 was like a breath of fresh air in the rapidly stagnating crime-drama genre of television. It was an effortless mix of hot topics and an urbane approach to comedy. Cybill Shepherd played Maddie Hayes, recently divorced ex-model whose husband took her for nearly everything except a detective agency that she decides to run as her own business. One of the detectives still in her employ is David Addison (Bruce Willis) and for roughly four years, the pair became the host of primetime television, but while Shepherd and Willis’ chemistry is what kept the show alive, the two hated each other behind the scenes.

I know Willis had a rough reputation, but stories of Shepherd’s antics were the stuff of legend. A couple of years into the show’s run, Willis started making movies. I remember his first full-fledged leading male-status role was in Blake Edwards’ Blind Date in 1986. Not a terrible movie, but forgettable, to be sure. He made a forgettable western/comedy that same year with the same director. Willis had an “everyman” charm about him, but he had yet to break through, until 1988 and Die Hard. 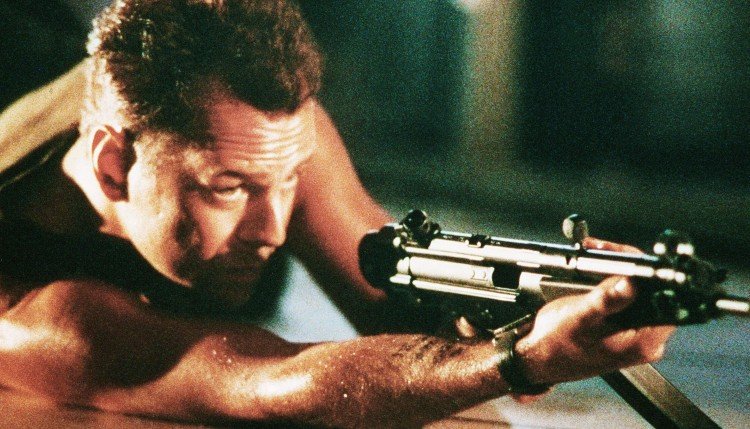 Roderick Thorp’s Nothing Lasts Forever was a dime-store sequel to his earlier book, The Detective, that was made into a movie in the late ’60s starring Frank Sinatra as Joe Leland, a retired cop and private detective. There are some subtle, interesting deviations from the source material. Leland arrives at the building to visit his daughter, Stephanie. The antagonist, Anton Gruber, wants to expose dealings between Stephanie’s employers and Chilean secret police. Leland believes his daughter was in on it and she winds up falling to her death with Gruber in the end.

Because Sinatra had first refusal rights to the character for any further adaptations, 20th Century Fox brought the Die Hard project to “old blue eyes” first. He turned it down, and then the property made the rounds to every name (and some non-names) actor in Hollywood from the ’70s to the ’80s. Locations, names, and motivations were changed but the bare-bones of the storytelling remained. Hans Gruber (Alan Rickman) leads a merry band of mercenaries to the Nakatomi Tower in Los Angeles to steal hundreds of millions of dollars worth of bearer bonds.

I don’t know much about bearer bonds, but I’d have to assume they are untraceable, or perhaps just as solid as currency internationally (like the purported “Bitcoin”)—whatever they are, Gruber wants them, and he’ll do anything to get them, and that includes taking an entire floor hostage during a Christmas party. Among those being held is Holly Gennaro (Bonnie Bedelia) whose estranged husband, New York cop John McClane, has just arrived to spend time with his children. He stops off at the Nakatomi building just before the bad guys arrive and the building is locked down. 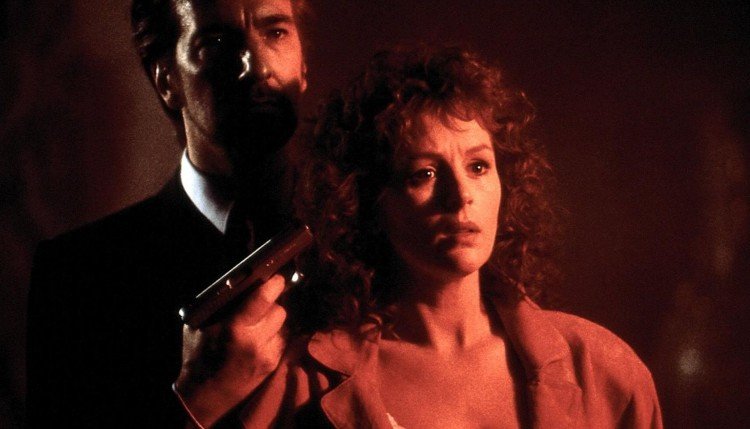 This enables him to move inside the building undetected and anonymous, at least until news reporter William Atherton (playing another in his proprietary line of “jerk” characters, Richard Thornburg) outs him as Holly’s husband. Between Atherton and co-star Paul Gleason, Die Hard is a veritable buffet of “jerk” characters. It’s up to this off-duty cop (with the help of Twinkie-loving Sergeant Al Powell on the 2-way radio) to save the day. I don’t know that Die Hard was expected to be a huge success, considering the $25 million investment in a movie with untested leads such as Willis and Rickman.

1988 was an unusual year in film. It was a year before the “Franchise Apocalypse.” The highest grossing film of the year was Rain Man, and Crocodile Dundee II and Rambo III were the only sequels to make the top ten that year. Die Hard seemed to be yet another “happy accident,” as it was based on a singular source, but then permitted heavy, character-driven rewrites to make the story cinematic. This is something audiences don’t understand when comparing movies to their sources. The movie is the adaptation of the screenplay. The screenplay is the adaptation of the original source material, if such exists.

It is Bruce Willis and Alan Rickman (and John McTiernan’s direction expertly shot by Jan de Bont) that make this movie work so well. It’s funny and spirited! A couple of years later, Rickman would be cast as the Sheriff of Nottingham in Robin Hood: Prince of Thieves, again imparting equal parts wit and brutality, and being able to pull it off with such ease he would put a number of other actors to shame. Die Hard would, of course, be followed by a string of successful sequels, but none of them approach the audacity and sheer fun of the first movie.

“You’re supposed to stay in your seat until the plane reaches the terminal. No frequent flier miles for you.”

While John McTiernan was off making The Hunt for Red October, Renny Harlin took over directing chores for the convoluted (and I do mean convoluted) sequel to Die Hard, Die Hard 2: Die Harder (how does one die harder?). Harlin had just finished principal photography for The Adventures of Ford Fairlane* and started Die Harder with very little in the way of preparation. 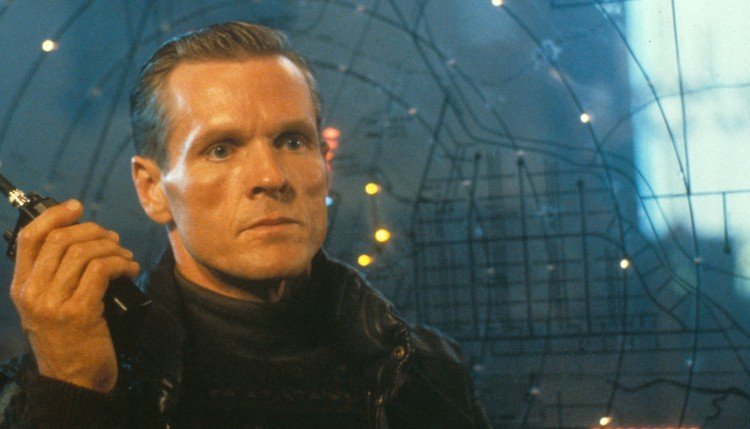 John McClane (Bruce Willis), as evidenced by his easy adaptation from over-the-hill private detective Joe Leland in Frank Sinatra’s The Detective, was an everyman character with a law enforcement background who could be dropped into any story with a minimum of fuss. The source for Die Hard 2 was not another Joe Leland pulp crime saga, but another cheap paperback titled 58 Minutes written by Walter Wager, but still based on Roderick Thorp’s characters.

In 58 Minutes, we have divorced cop Frank Malone who is on his way to JFK to pick up his daughter, when the control tower receives a call from a terrorist who has cut the power to JFK’s runway lights. It’s up to Malone to find the inside men responsible before his daughter’s plane crashes. See how easy it is to just insert McClane into previously-written adventures? I think it’s clever and, as long as you properly credit and compensate those writers who crafted the original adventures, it’s a good (and economical) way to tell a story in cinematic terms. Die Hard 2 goes a little further.

William Sadler (who would go on to play “Death” in the Bill & Ted movies) plays Colonel Stuart, whose band of military thugs ciphon the airport’s power and cut off their runway lights so they can make sure to have uninterrupted access to a special flight soon to land. Despot General Esperanza is on the flight and they want to free him before he can be prosecuted at a military tribunal. Unfortunately for them, McClane’s wife, Holly, is on one of the flights effected by the power outage. 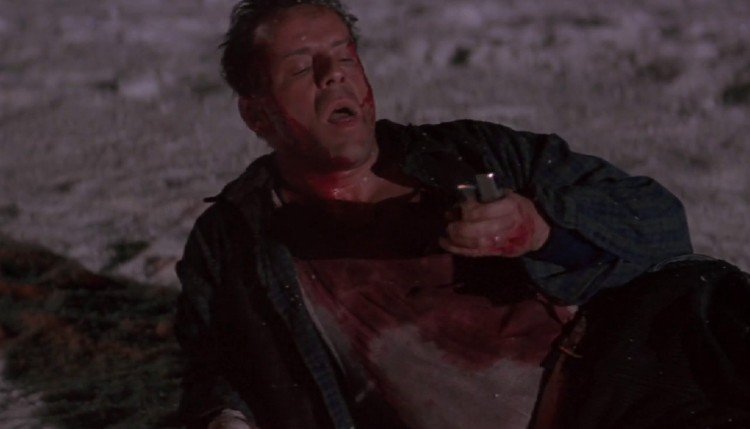 Coincidentally, Dick Thornburg (William Atherton) is also on the plane, and he does what he does best: be a big pain in the ass! There are a couple of other jerks in the cast, Dennis Franz and Robert Costanzo among them. Fred Dalton Thompson (and his great, booming Alabama accent—“Russians don’t take a dump without a plan.”) turns in his usual, reliable authority figure performance as flight director, Ed Trudeau. McClane keeps getting in everyone’s way until he points out that the tactical team commanded by Major Grant (John Amos) is doing double duty working with Stuart.

This leads to an impressive finale on the wing of Stuart’s plane as it takes off. McClane pulls off the gas cap and lights the trail of fuel, which chases the airplane into the air and destroys the craft with some decent, state-of-the-art CGI effects. Willis once again plays McClane with zeal even in a year fraught with bizarre challenges, such as playing a baby in Look Who’s Talking Too and a down-on-his-luck journalist in The Bonfire of the Vanities. He would have an interesting series of ups and downs during this time before appearing in Pulp Fiction, which would revitalize his career.

*My good friend and colleague, John Froelich, declared this movie the funniest of all time for his list of funniest movies ever made. He’s from Chicago, so don’t judge him.

Wishing you a Happy New Year!