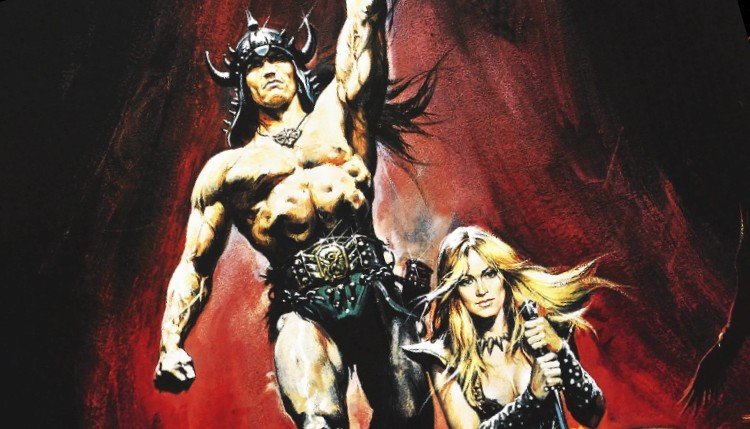 “Fire and wind come from the sky, from the gods of the sky. But Crom is your god, Crom and he lives in the earth. Once, giants lived in the Earth, Conan. And in the darkness of chaos, they fooled Crom, and they took from him the enigma of steel. Crom was angered. And the Earth shook. Fire and wind struck down these giants, and they threw their bodies into the waters, but in their rage, the gods forgot the secret of steel and left it on the battlefield. We who found it are just men. Not gods. Not giants. Just men. The secret of steel has always carried with it a mystery. You must learn its riddle, Conan. You must learn its discipline. For no one – no one in this world can you trust. Not men, not women, not beasts.”

Arnold Schwarzenegger had appeared in several films before his breakout success in Conan the Barbarian. There were two I remembered because they played on cable television in practically endless rotation. He appeared as a fiddle-playing bodybuilder in the brilliant Bob Rafelson comedy, Stay Hungry, and as Mickey Hargitay in The Jayne Mansfield Story starring Loni Anderson. 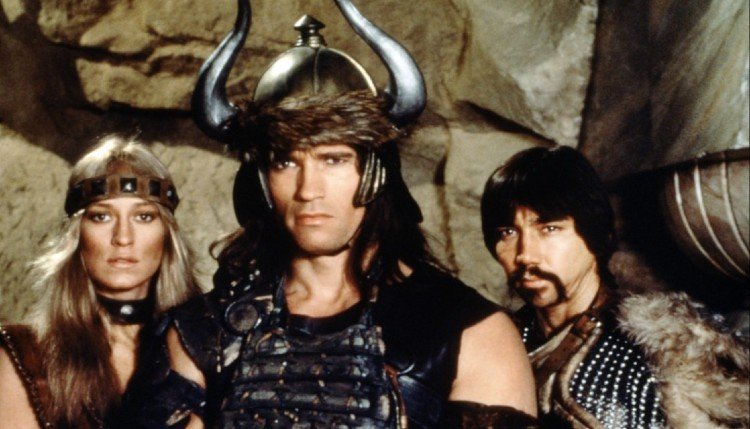 Schwarzenegger’s advertised height is around 6’2″ (my wife scarcely believed that, but I checked with three sources) with a “contest” weight, in his peak years, of 235 pounds, nearly all of it in muscle mass, which made him remarkably thin for a bodybuilder at a time when bodybuilders were enormous monsters. He looked incredibly lean for a guy who could bench-press 500 pounds. He retired from bodybuilding in 1980 and became one of the most popular movie stars of the ’80s.

Conan the Barbarian was created by Robert E. Howard as a series of pulp short stories and novels beginning in 1931. Howard was a troubled man who suffered from severe depression and killed himself in 1936 while his mother was in a coma. He left a suicide note that read, in part: “All fled, all done, so lift me on the pyre; The feast is over and the lamps expire.” Vincent Donofrio played Howard in the film memoir, The Whole Wide World. Conan ran as a comic book for Marvel from 1970 to 1993.

John Milius, a fan of Conan and macho sword and sorcery films in general, put together the project with Edward Pressman, Raffaella De Laurentiis, and regular Milius collaborator Buzz Feitshans, but in order to secure the budget, he had to bring in a “name screenwriter.” In this case, Oliver Stone. These were different times, when a writer’s interest in a project could guarantee funding. It’s not like that anymore. Now, I’ll tell you why I enjoy Conan the Barbarian. 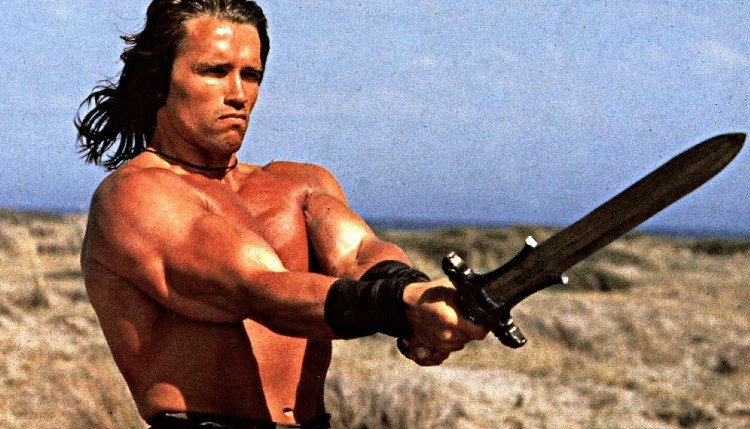 It’s an incredibly simple story, about a boy raised to become a warrior who fights Doom (James Earl Jones), the cult leader of the Temple of Set. This is really all you need to know to get into the movie. I wasn’t permitted to see the movie when it came out in 1982, because I was nine and the movie was rated R. This was a kid’s movie for adults with graphic violence and nudity, and I remember there being quite a stir about the movie’s content being aimed at children, but in 2021, it seems tame save for the macho male archetypes, which would never be permitted today.

More importantly, the movie is an amazing piece of production with beautiful photography. Milius and Stone wisely keep Conan’s dialogue to a minimum. I’m pretty sure Arnold only says a couple of words throughout the whole movie. He’s a much more frightening (and believable) force when he keeps his mouth closed. Conan the Barbarian was not the enormous blockbuster Universal Pictures was hoping for, but it did turn a profit for a big-budget R-rated fantasy epic, and, like Raiders of the Lost Ark, inspired a succession of knock-off sword and sorcery epics through the ’80s.

“Between the years when the oceans drank Atlantis and the rise of the Sons of Aryas, there was an Age undreamed of, when shining kingdoms lay spread across the world. Hither came Conan, the Cimmerian, sword in hand. It is I, his chronicler, who knows well his saga. Now, let me tell you of the days of high adventure.” 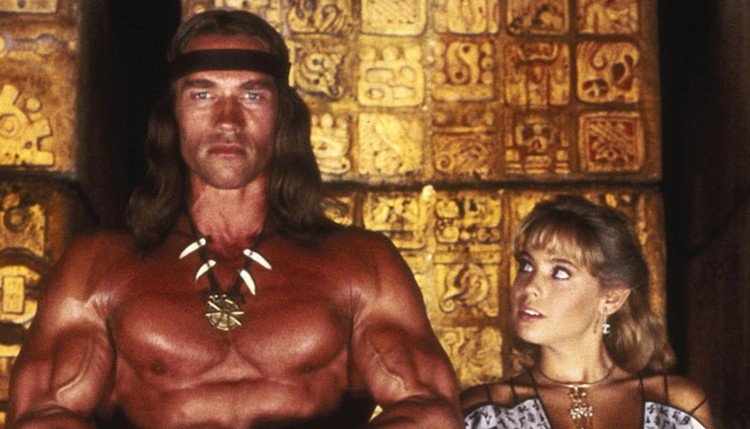 While John Milius was in New Mexico making a war movie about teenagers fighting communists, Dino De Laurentiis was hastily making arrangements for a quickie sequel to his modest hit, Conan the Barbarian. The sequel was only slightly cheaper than the original (and it made much less money at the box office), but it did bring back Arnold Schwarzenegger in the title role just before his movie star-making turn as the titular Terminator.

This was one of the last movies to be rated PG for violence. There is some graphic violence, but the movie’s tone is less dark and less bloody than its predecessor, possibly because De Laurentiis (and daughter Raffaella) thought the R-rating effected ticket sales. Conan the Destroyer is correctly marketed for kids, but the decrease in violence and killing did seem to bring about an increase in dialogue, and I did point out in my earlier review that in these early movies, Arnold was best seen and not heard. This would be a great set-up for a TV show. Conan walks the Earth and gets into adventures.

Conan and his friend, Malak (Mako) are hired by the Queen of Shadizar (Sarah Douglas) to find the “Heart of Ahriman” so they can locate the Horn of Dagoth, and they have to keep her niece, Princess Leia…I mean, Jehnna (Olivia d’Abo), safe from sexual encounters…ahem. Being a virgin is a struggle in itself, but Jehnna (who’s dress makes it look like she has enormous breasts) has to remain a virgin so that she (ahem) can restore the horn, as it were. I don’t get it. It sounds needlessly sexy for a PG-rated 1980s adventure-fantasy film. 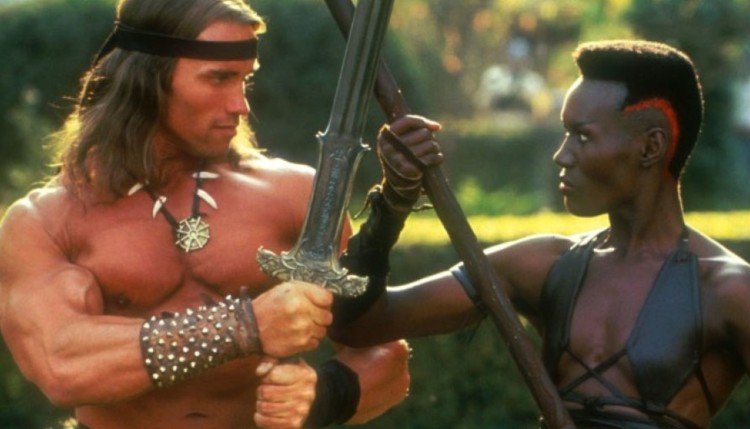 There’s also some strange humor, as if the writers (Roy Thomas, Gerry Conway, Stanley Mann—not an Oliver Stone among them!) thought they should be funny to cut the tension and keep people’s minds off the violence. In addition, the studio sets make the movie look a lot cheaper than the previous film. The lighting sources are way off. While we see candles and torches guiding our heroes, it’s more than obvious they’re being lit by key track lights. As a result, the movie looks like a television show from the early ’70s.

The three new additions to the cast, Grace Jones, Wilt Chamberlain, and Tracey Walter (you may remember him as the Joker’s henchman, Bob, in Tim Burton’s Batman) are the best thing about the movie with their back-and-forth banter. This is still a fun movie, but it’s not as ambitious as the first movie, and less willing to take chances. Director Richard Fleischer had previously directed Soylent Green, Tora! Tora! Tora!, Doctor Dolittle, Fantastic Voyage, Barabbas, and The Vikings. After Conan the Destroyer, he would direct Red Sonja (another Robert E. Howard creation) and Million Dollar Mystery. Conan the Barbarian was rebooted (and quicky forgotten) in 2011 with Jason Momoa in the lead role.