“Jesus Frank, that’s Dave Morris. He does Santa every year.”

Roger Corman protégé Joe Dante made the werewolf movie The Howling in 1981, boldly competing with John Landis’ similarly themed An American Werewolf in London. Based on a novel by Gary Brandner, The Howling spawned several sequels, mostly low-budget and on the fringes of direct-to-video distribution. The Howling was a wink and a nod at Hollywood horror and science fiction movies.

Dante peppered his cast with veteran actors such as Dick Miller, Slim Pickens, Kevin McCarthy, and John Carradine. He would continue to do this all through his career, including in his next films, the “It’s a Good Life” segment of Twilight Zone: The Movie, and Gremlins, both produced under Steven Spielberg’s supervision. It was interesting choice considering the fourth and final installment of the Twilight Zone movie was about a gremlin (albeit one with a distinctly scaley, Rastafarian look to it) vandalizing an airplane and tormenting John Lithgow at 30,000 feet.

These are different gremlins altogether. Screenwriter Chris Columbus gives us a mystic backstory and mythology about these creatures. They don’t start out as disgusting, technologically savvy monsters. They have stages to their development. They start out as adorable little furballs (called Mogwai), akin to arboreal or highly intelligent rodentia, but if you feed them after midnight (I never got the hang of figuring out time zones), they enter a pupal stage (like moths and butterflies) and emerge some time later as unpleasant creatures.

They do have a vulnerability. They can’t be exposed to bright light, otherwise they’ll fry. That’s easy enough. Goofy inventor Randall Peltzer (Hoyt Axton) brings home a Mogwai as a present for his son, Billy (Zach Galligan), even though they already have an adorable dog named Barney. You’d think Billy was ten years old, but he’s actually a full-grown adult. It’s possible earlier drafts of the script put Billy’s age at roughly the same as his friend played by Corey Feldman. There’s too much of an age difference for these kids to be peers. It’s a little strange.

In addition, Billy works at the local bank and drives a car. It isn’t long before Billy starts breaking rules. Corey accidentally spills liquid on Billy’s Mogwai (adorably named Gizmo) and additional furballs sprout from his flesh. Later, the band of mischievous creatures trick Billy into feeding them after midnight. Soon, these newly-hatched gremlins are wreaking havoc on this small town. A lot of this doesn’t make any sense, but it’s so well made, it can be easily forgiven. We go from a quaint, small-town Normal Rockwell vibe to complete chaos in about twenty minutes.

Dante (like John Carpenter) had this ability to photograph bizarre monsters, starting with The Howling, and make them seem real even if they were cartoonish. I remember Mad Magazine did a spoof of Gremlins (“Grimlins”) that ended with the entire town running Randall Peltzer off and warning him never to return. It’s kind of like the alternate ending of It’s a Wonderful Life on Saturday Night Live when Uncle Billy returns at the end of the movie to tell everyone Potter stole the $8,000 and everybody rushes to Potter’s house, throws him from his wheelchair, and beats him to death. That would have been a much more satisfying conclusion to the proceedings, but these are supposed to be kid’s movies. 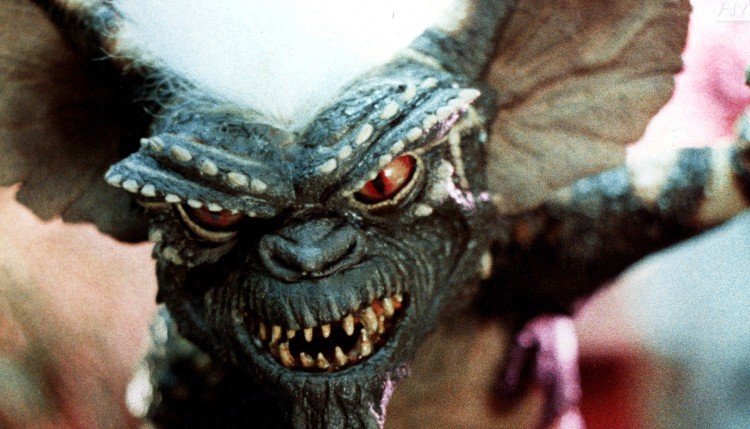 “Now, bear in mind, none of us has been in New York before. There are the Broadway shows – we’ll have to find out how to get tickets. There’s also a lot of street crime, but I believe we can watch that for free. We want the essentials. Dinettes. Complete bedroom groups. Convenient credit, even though we’ve been turned down in the past.”

I’m being completely serious here. I know there’s going to be a lot of eye-rolling and moans from various peanut galleries, judges in balconies, and be-jumpsuited men with their robot pals. Gremlins 2: The New Batch is one of the greatest sequels ever made. Yes! You get a bit world-weary when yet another sequel is announced, and it never seems to meet your expectations, let alone exceed or “subvert” them (God, I hate that word). I referenced the year 1989 as the perfect storm of sequels.

Gremlins 2 came out a year later, and we were still exhausted from the onslaught of film product, and the more-than-obvious grabs for cash. Indeed, the first Gremlins movie smelled of action figures and stuffed Mogwai dolls. It was a terrible process that disillusioned director Joe Dante after working with Steven Spielberg for several years, so he decided to turn the concept on its ear and mock the rampant commercialization that comes hand-in-hand with mainstream filmmaking.

He would make Small Soldiers for Dreamworks eight years later (again a ringing endorsement for the mediocrity of product tie-ins), but in later years, Hollywood would seem to have very little interest in his talents while less ambitious, less interesting filmmakers copied him. Dante was one of those guys, like John Carpenter, John Landis, George A. Romero, and Tobe Hooper, who were enormously influential to modern filmmakers but forgotten by contemporary audiences. It’s a damned shame.

Gremlins 2: The New Batch is a movie that mocks its predecessor in innovative ways. It’s a movie that would frighten Warner Brothers executives these days. We go along with the pretense that this is a sequel to an in-universe story about a young man and his pet Mogwai, Gizmo. We’re in New York for this exercise. Billy Peltzer’s hinted-at artistic ability from the first movie pays off (in a way) and he gets a corporate job as a graphic designer for Clamp Industries, headed by the obvious Donald Trump analogue, Daniel Clamp (an energetic John Glover). 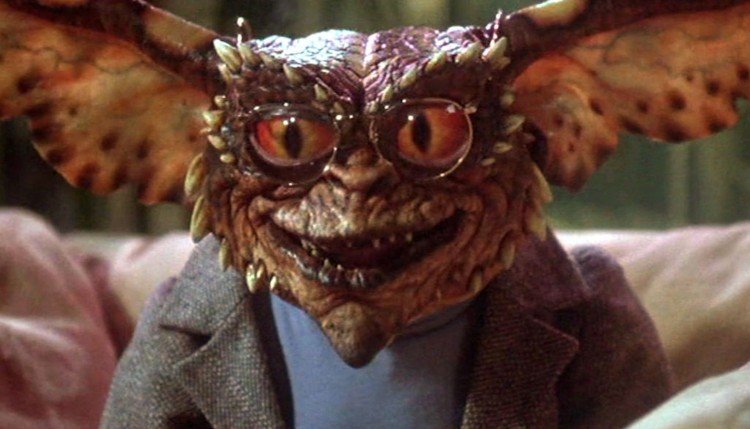 There are a whole bunch of improbable circumstances and coincidences that lead us to this sequel. Gizmo is driven from his home in a New York antiques store. He is caged and taken to a research lab located in the over-designed yet inefficient Clamp building where Peltzer and his girlfriend, Kate (Phoebe Cates) work, and it isn’t long before we have a family reunion. Even the Futtermans (Dick Miller and Jackie Joseph) arrive for the express purpose of being tormented yet again by gremlins.

Of course, having Gizmo poked and prodded by ambitious scientists insures strange things are going to happen. A broken water fountain sprays in Gizmo’s direction, and the next thing we know, we’ve got another collection of Mogwai offspring (with Stripe lookalike, Mohawk, as the heavy this time). Gizmo takes a backseat for most of the movie’s running time, eventually striking back (after watching Rambo) when he’s pushed too far.

It reminds me of how we forgot that the Austin Powers movies were about Austin Powers and not Dr. Evil. Gizmo should be the star, but because he’s so cute and harmless, he isn’t terribly interesting on other levels. What is interesting is that Kate can’t tell any Mogwai apart, so she takes off with the Mogwai she assumes is Gizmo, leaving him trapped in the Clamp building as the gremlins torture him. The creatures continue to multiply until they’ve flooded the building. 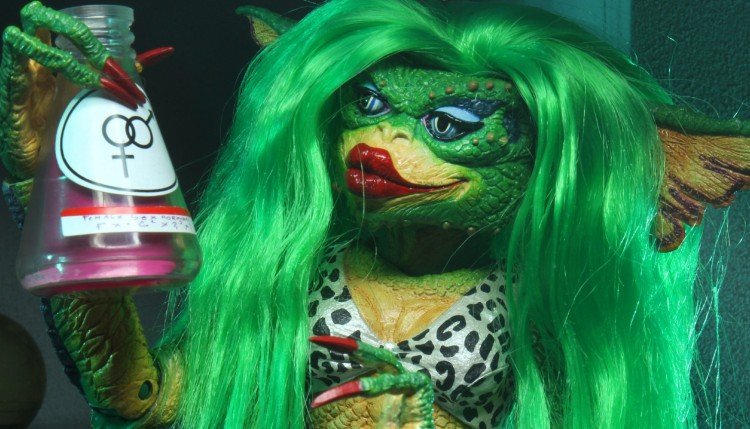 Everybody evacuates except for Billy, Kate, Billy’s lecherous boss, Marla (Haviland Morris), Robert Prosky (as an Al Lewis-style horror TV show host), his cameraman (Gedde Watanabe!), and building security supervisor (and Joe Dante regular) Robert Picardo. They come up with a plan to set the clocks for later in the day and then drop a tarp over the windows to simulate a night sky, and the gremlins will want to leave and then get zapped by the sun. It doesn’t work out that way because, in New York, we’re subject to freak thunderstorms. Look, it just happens.

Anyway, Billy has to come up with another plan as the gremlins engage in one musical show-stopper after another (led by Tony Randall’s “Brain” Gremlin). Granted, Gremlins 2: The New Batch is a corporate product made by Warner Brothers, yet this fact is lampooned by the filmmakers. There’s a scene in the movie that shows a gremlin becoming some kind of a bat hybrid and he crashes through a wall that perfectly forms the trademarked Batman logo. The movie even makes fun of itself and the Gremlins “franchise.”

What’s baffling about all of this is how the movie flopped in the summer of 1990, earning $40 million on a $50 million budget. The original movie made over $200 million on a budget of $11 million. It’s possible Warners had no confidence (I don’t remember any advertisements) and dumped it with very little in the way of press or enthusiasm. This is a movie made by movie lovers for movie lovers.