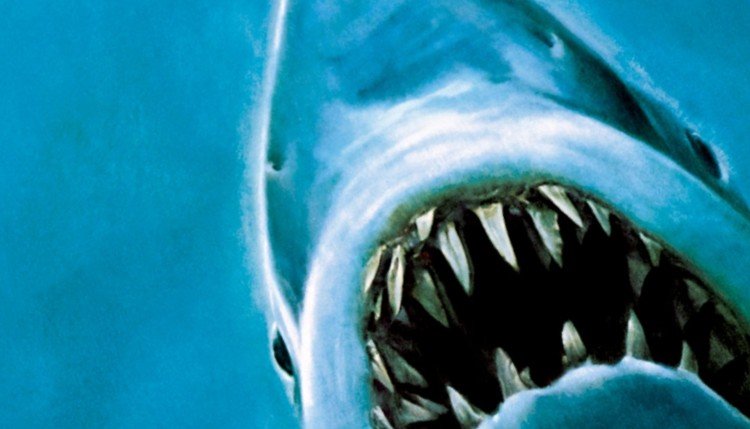 “It’s only an island if you look at it from the water.”

If you want to get stingy about awarding credit to the first motion picture blockbuster franchise, I suppose we could talk about The Godfather, which premiered in 1972, and was followed two years later with a sequel. It’s true those movies were huge hits, but Jaws came along in 1975 and ushered in a new era of big-tent summer movies. This is a movie that still (yes, still) frightens me to this day. It’s a quite logical fear that could be a reason for my swimming fears. If there’s something I know I can’t do well, its swim, and then you factor in the threat of a giant killer shark. I’m hopeless in the water and then—what’s that?

Dun-dun … dun-dun … dun-dun, dun-dun, dun-dun, dun-dun. A shadow under the surface of the water. The breaking fin. I can’t breathe. This is a horror movie. It’s a horror movie about a killer shark. It’s an underwater slasher movie. I’m sure everybody knows the story. A 25-foot great white shark sets up housekeeping in the fictitious New England community of Amity (which, as you know, means “friendship”). Despite all of the higher-ups (including head-in-the-sand Mayor Larry Vaughn, played by Murray Hamilton) knowing a succession of fatalities is being caused by said shark, the business owners of Amity want the beaches kept open. 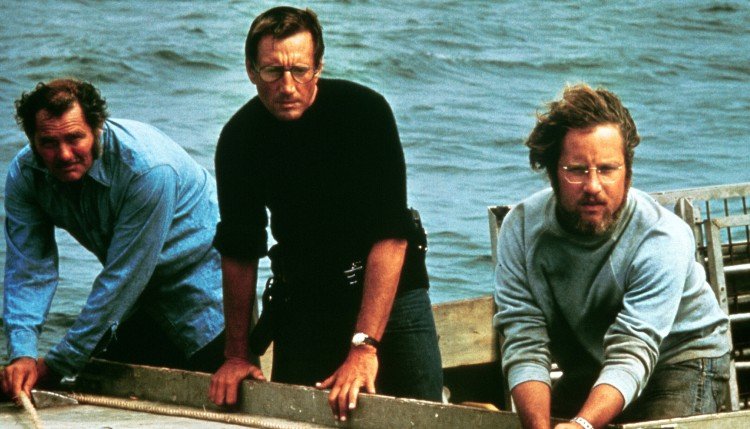 This is a town that lives on summer dollars by way of the tourist industry. Only New York transplant Chief Martin Brody (Roy Scheider) and high-strung ichthyologist Matt Hooper (Richard Dreyfuss) know what the town is truly up against. In an absolutely horrifying scene, young Alex Kintner is gobbled up by the shark in plain view of everyone on the beach. It’s interesting how looking at it from a distance, the boy is engulfed in a fountain of blood, but if you look closer, you can see the mouth of the shark surging up from the water.

Hooper performs an autopsy on a recently caught tiger shark, but can find no evidence of any bodies, which means the predator is still out in the open water. Vaughn insists on keeping the beaches open for the 4th of July. This goes about as well as you could expect, and I seriously can’t imagine Amity will ever be the hot tourist spot it once was, but we do get a Jaws 2 set in that same location, so I guess people have a short memory. Brody hires shark fisherman Quint (Robert Shaw) to catch and kill it. 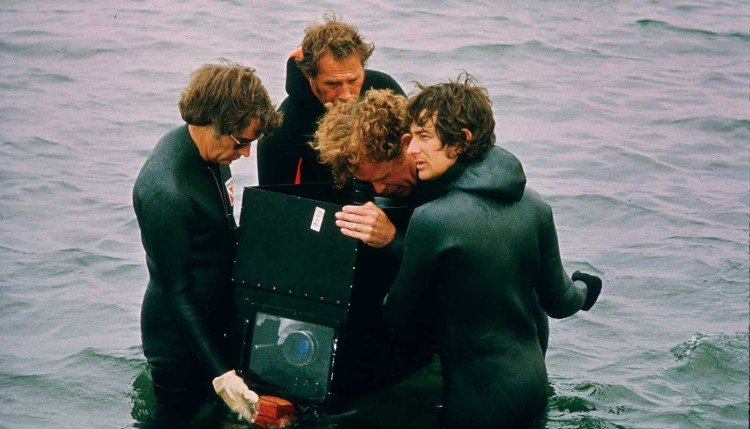 The dynamic then shifts to the claustrophobia of a small boat on the water with Brody, Hooper, and Quint representing what could be three aspects of the male personality with Hooper and Quint at opposite ends. Hooper is the intellect and book smarts, while Quint is the muscle and wisdom. Brody holds the two at bay with his neuroses and pragmatism, ultimately becoming the movie’s hero when muscle and brains fail. Peter Benchley’s book does cover the strata of machismo and male anxiety, and where Spielberg (and his collaborators) marginalize many of the soap opera elements, there is room to ponder the problem-solving skills of three intrinsically opposed forces.

Though Spielberg claims to suffer nightmares about the making of Jaws, this is the movie that put him on the map, as well as changed the face of moviemaking (for good or ill) for all time. It was the release of Jaws on June 20, 1975 that brought about the still-in-use box office business model. Opening weekends were suddenly all that mattered, and the b-movie aesthetic was given an expensive face-lift. 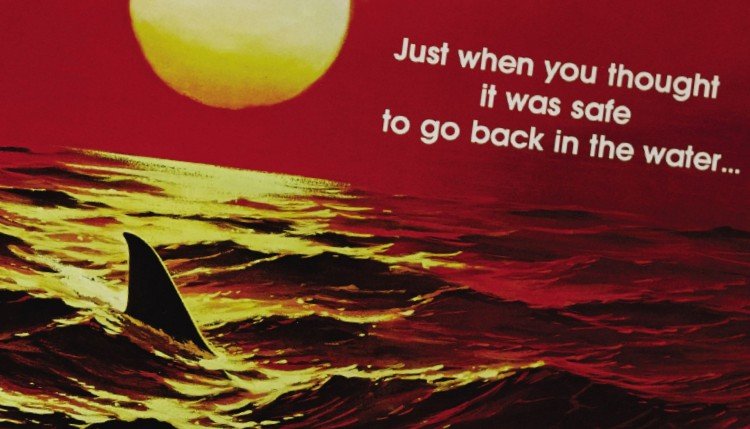 “Just when you thought it was safe to go back into the water … “ That tagline was considered the most readily identifiable in all of movie history. There are others. “This time, it’s personal.” “Be afraid. Be very afraid.” “In space, no one can hear you scream.” There’s a poster for Jaws 2 (not the traditional theatrical poster with the water skier and the big shark breaking water) that hints at the size of the shark based on a sharp fin breaking choppy water under a peaceful, orange-drenched sunset. It’s a beautiful artistic rendering. I’d love to have a framed version of that poster*.

Jaws 2 brings back everyone from the first movie with the exception of Richard Dreyfuss (who was busy shooting Close Encounters of the Third Kind with Spielberg) and Robert Shaw (whose character died in the first movie, and who would die two months after Jaws 2 was released). After a couple of eventless summers, another great white shark returns to Amity to terrorize swimmers. A couple of scuba diving morons take pictures of Quint’s sunken Orca and before they are gobbled up whole by the beastie, the waterproof camera goes off and takes a few shots of a shadowy, shark-shaped figure with a black eye (like a doll’s eye!) and what appears to be a set of jagged teeth, but it’s probably not a shark so don’t worry about it. 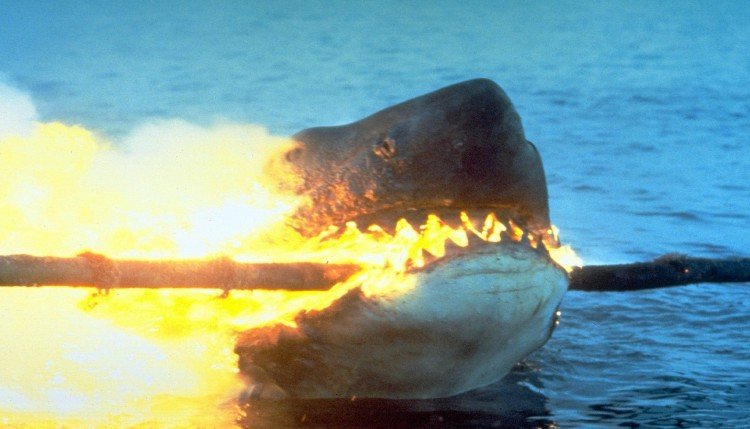 Meanwhile, a killer whale is beached with an enormous bite mark in its head. Chief Martin Brody (Roy Scheider) begins to suspect another killer shark out there and wouldn’t you know it? The town doesn’t believe him! They even fire him after an incident at the beach where he fires his gun at the water when he sees a suspicious shadow that turns out to be a school of fish. He drinks his problems away for a little while, but he has kids that want to go out on a boat because they’re stupid, basically, and for about ten minutes, Jaws 2 becomes a summer teen sex comedy (complete with Keith Gordon and Donna Wilkes!), and wouldn’t you know it? The shark knows that these are Chief Brody’s kids! This is turning into a conspiracy.

In the final third of the movie, we’ve pretty much forgotten the Amity politics subplot and gone into a straight rescue mission. After the shark forces down a helicopter (yes, forces down a helicopter), Brody arrives, grabs a power cable and shoves it in the shark’s mouth. I remember Spielberg had a rule that went along the lines of, “If I have them for two hours, they’ll believe anything.” Of course, it has to be plausible, but Jeannot Szwarc (replacing the fired John D. Hancock) couldn’t make this ending fly if he strapped a rocket to it. It’s a ridiculous ending but it’s fitting for a sequel about a killer shark, and the box office returns would ensure another sequel.

*I did eventually get the poster!