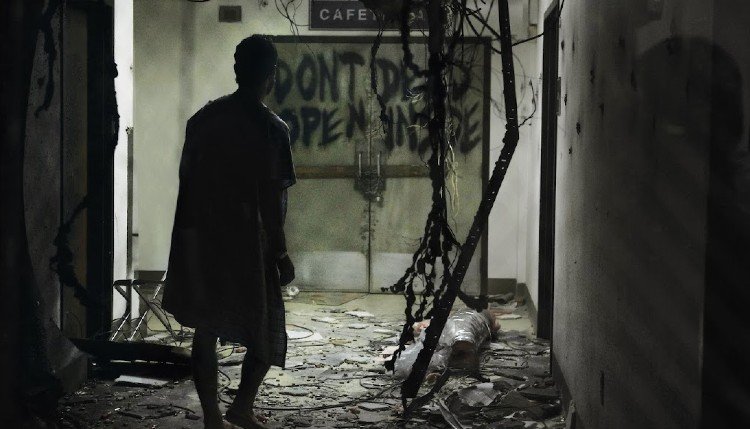 Everything ends. Everything dies. Or does it? Does it die or does it keep going, stumbling along, searching for living flesh to feed on? Whither The Walking Dead? The zombie of television franchises. The first episode established Rick Grimes (Andrew Lincoln), the doomsday deputy, shot down in the line of duty and spending the birth of the apocalypse in a coma as societies collapsed and the stragglers were forced to work together to fight the dead. It’s never adequately explained how all of this started.

We get some exposition in the first season finale episode, “TS-19,” when one of the CDC scientists, Edwin Jenner (Noah Emmerich) reveals some twisted form of weaponization via virus as well as his wife being one of the test subjects, the “Subject 19” of the title. In the pilot episode, Grimes wakes to a chaotic scene; death, fire, and zombies. He goes right back to work, but he can’t find his partner or his family: wife Lori (Sarah Wayne Callies) and son Carl (Chandler Riggs). 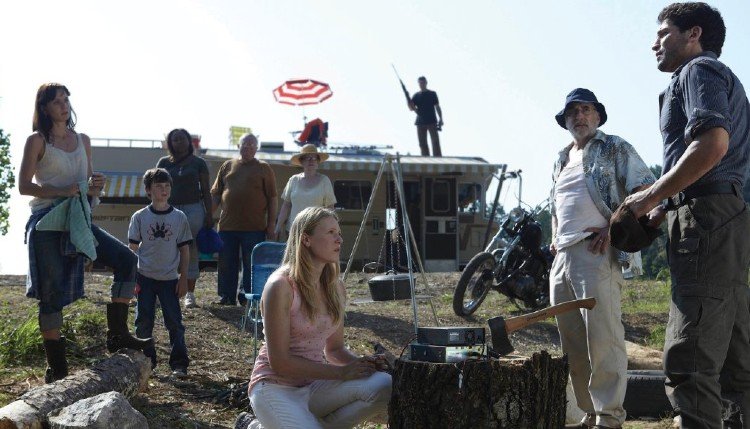 He does hook up with half-mad Morgan (Lennie James) and his son, Duane, who give Rick food and get him up to speed with regard to the zombie apocalypse. Rick promises to keep in touch via walkie-talkie as he journeys to downtown Atlanta on horseback, where he eventually hooks up with Glenn (Steven Yeun) and his merry band. This is how the main group, our heroes for the next (roughly) five years, comes together.

We have the resourceful Glenn, redneck tracker Daryl Dixon (Norman Reedus), RV owner Dale (Jeffrey DeMunn), timid Carol (Melissa McBride), intrepid Andrea (Laurie Holden) and several others including Lori, Carl, and Rick’s partner Shane (Jon Bernthal), who began an affair with Lori (who was carrying his child) not long after the downfall of civilization. You can hardly blame him, but the early seasons of the show are wrought with soap opera scenarios until Shane’s death (by Rick’s hand) at the end of the second season.

The group is taken in by the kindly Hershel Greene (Scott Wilson) until his farm is overrun and they are forced to flee for more concrete pastures. Andrea is separated from the group and rescued by katana-wielding Michonne (Danai Gurira) who makes her way to the first of a couple of gated communities in the series. This one is called Woodbury, and it is run by a man known as the Governor (David Morrissey). The rest of the group finds a prison and remains there as Lori dies giving birth to a daughter she has named Judith. 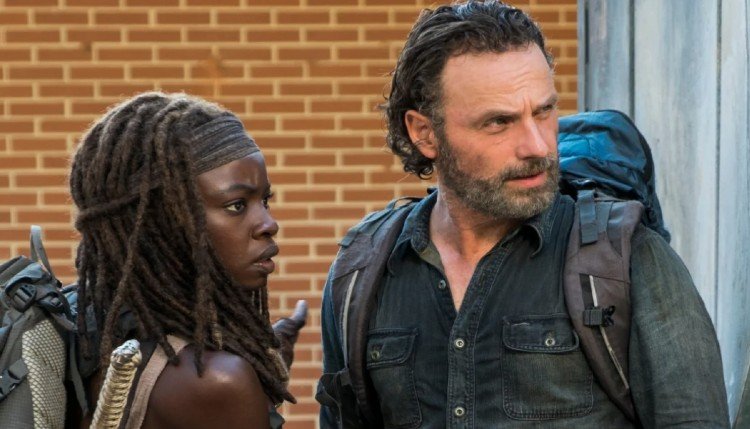 The Governor seeks to shore up his numbers by wiping out other groups and stealing their munitions and supplies. Rick’s group wages a successful attack against the Governor, but at the cost of more lives. This is a theme the series always comes back to: the worst of humanity is not a zombie. It’s not like we needed to be reminded. I remembered a bit of dialogue from series creator Frank Darabont’s movie adaptation of Stephen King’s The Mist. Bagboy Ollie says, “As a species we’re fundamentally insane. Put more than two of us in a room, we pick sides and start dreaming up reasons to kill one another.”

Walkers have but one purpose. They eat the living. They have no prejudice, no bigotry, no deceit. They simply consume, and they’re always winning the ballgame with this one central purpose. They never stop, and by the sheer imbalance of their numbers against the living, they will capture the world if humanity cannot get their collective act together. After the Governor was finally vanquished, the team scattered in what was, arguably, the show’s best season. In the latter half of the fourth season, individual episodes were devoted to the scattered members of Rick’s group. This was exciting storytelling and possibly the peak of Walking Dead’s creativity.

We also saw what was possibly the last female character ever written to evolve and learn (rather than already know everything and be a genius and a bad-ass instantly) over the course of a narrative. The once sheltered and timid Carol learned to take care of herself and the people around her. She and Daryl form a bond that continued to the end of the series. They’re an odd couple for sure and, in my opinion, the best characters. One of the more disappointing developments of the series was the grand, suspenseful lead-up to Terminus.

With the gang effectively separated, they all seemed to be heading in the same direction as evidenced by signs everyone saw proclaiming, “Sanctuary for ALL, Community for ALL. Those who arrive, SURVIVE.” It was an excellent build-up that led to nothing but a group of psychotic cannibals. It seemed the show was becoming repetitive; starving on a lack of ideas and going to bed hungry. It was all downhill from there with new characters being added, and other characters being killed off. 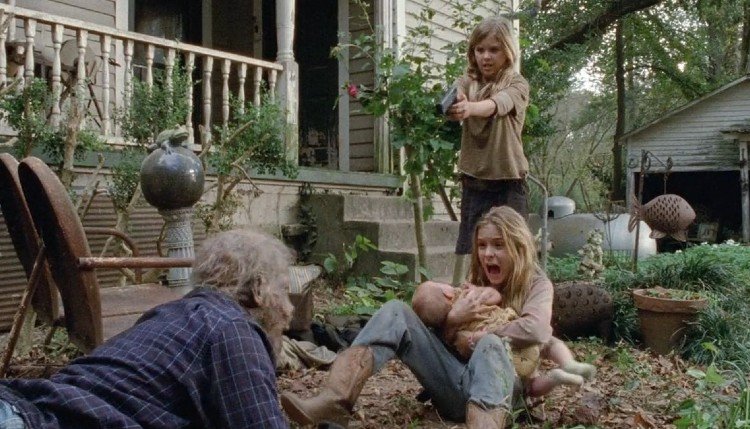 After Terminus, there was the hope of settling down in Alexandria, a planned community, led by the benevolent but clueless minor politician Deanna (Tovah Feldshuh), where we got some more soap opera antics. Eventually, Rick figures out the people of Alexandria don’t know how to defend themselves so he offers the services of his group to train them. Meanwhile, there are the walkers, and the walkers just keep on walking, tearing down anything and everything in their path.

As Alexandria is poised to fall, a new threat emerges in the form of Negan (Jeffrey Dean Morgan) and his Saviors, a ghoulish, efficient society of thieves that steals from neighboring communities and punishes those who defy them. Each season of the series aimed to up the ante with layers of creative violence, whether at the flesh-eating gore of the walkers as they feast on the living, or the barbed-wire-wrapped “Lucille,” Negan’s baseball bat, which he uses to dispense his own brand of brutal discipline.

Negan may have been one of the more interesting anti-heroes to appear at the end of the world and offer a psychotic refrain, but he came too late in the game for a television series. It works fine as a graphic novel (upon which The Walking Dead was based), but what were once concise chapters are now season-long story arcs. The actors do a fantastic job of fleshing out these characters, making them real (Reedus and Gurira spring to mind), but other, smaller and less significant characters take up too much screen time, and it gets worse as the show continues. This was one of the more disappointing aspects of the series finale.

After the Saviors, there was the Whisperers. After the Whisperers, there was the Reapers, and after the Reapers, we get the Commonwealth, a variation on Alexandria but with a fascistic police force put in place to enforce a bizarre caste system wherein the wealthy and privileged still get to retain their power over the working masses. This system eventually leads to open revolt when the people realize their leaders don’t have their best interests at heart—kind-of like RIGHT NOW! Daryl gets the best line of dialogue breaking down the situation: “You build this place to be like the old world, that was the fucking problem.” 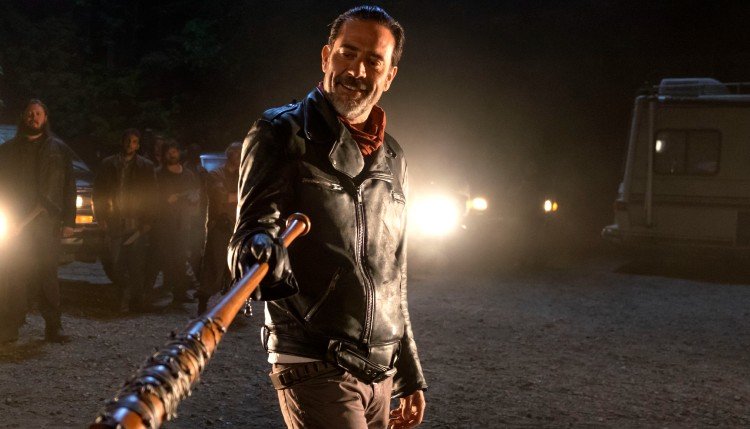 Along the way, there were some good guys: Ezekiel and his Kingdom, Oceanside, the Hilltop, and the scant decent survivors Rick and his group came across. The Walking Dead goes right off the rails in the ninth season with the departure of Rick. The character is not killed. He is simply taken away in a helicopter to an undisclosed location, apparently unable (or unwilling) to return, leaving Michonne and, inexplicably Maggie Greene (Lauren Cohan), in command. In the tenth season, Michonne would leave as well, abandoning Judith and her own child with Rick, Rick Jr.

Of course, we know these are actor decisions and not character or writing decisions, shattering any logic or reality the producers wished to maintain with the series as well as attempting to keep continuity with the graphic novels. The show should have ended with Rick, but because ratings were still comparatively impressive, the show continued. Still, 11 years is an impressive run for any television series, let alone a show about a zombie apocalypse. The zombie is a “walking” (you’ll forgive my choice of words) analogy for the genre it represents. It just keeps going. It may be death on two legs, but it keeps going.

In fact, the reason I didn’t initially watch The Walking Dead was because I was already tired of zombie movies. If ever there was a market that was completely oversaturated since 2002, it was zombies. They’re everywhere. AMC did something rather cute during the show’s series finale by producing commercials thematically connected to The Walking Dead; using zombies to sell phones and cerveza and turn the night into an all-around event. It’s disposable entertainment, but at least it is memorable, kind-of like The Walking Dead. I take that back. 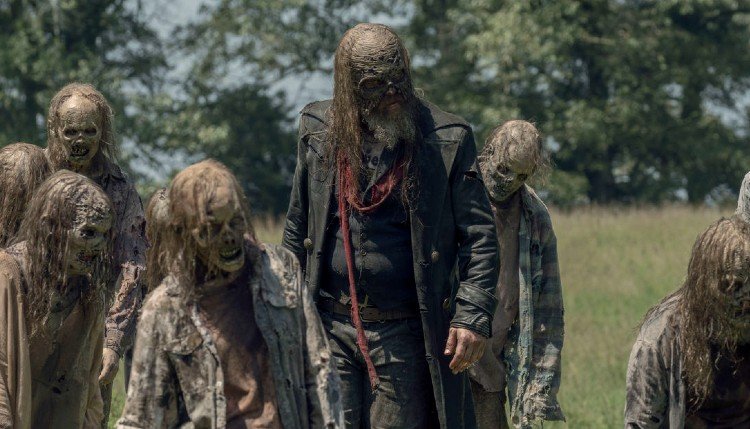 There were a handful of unforgettable moments. I’ll try to keep this spoiler-free. Sophia emerging from Hershel’s barn. Andrea, tied to a chair and trapped in a room with a walker. Lizzie and Mika (my heart sank at that one). The introduction of Negan (and “Lucille”). Yes, The Walking Dead wore out its welcome a while back, but the show yielded incredible moments of television. The show lost viewers and suffered a creative decline (as all shows do) with the change of creative staff starting in the ninth season, but it was a good run.

Unfortunately, AMC is still squeezing this particular tit dry, producing more shows in the Walking Dead Universe including (but not limited to) a Daryl and Carol spinoff, a Rick and Michonne spinoff, and an as-yet-untitled comedy show. I wonder what the heck that’s about. There’s also Fear the Walking Dead with Lennie James’ Morgan and Tales of the Walking Dead. This is the zombie of all franchises. It simply refuses to die! I think I’m done Walking. I’ll sit this one out.