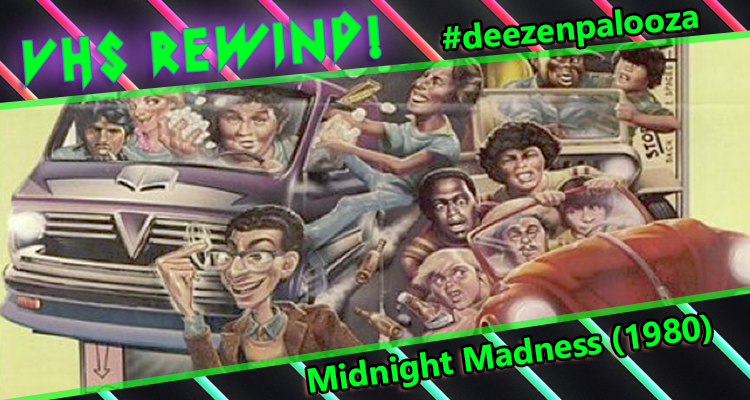 VHS Rewind’s Deezen-palooza continues with the product placement heaven known as Midnight Madness. No kidding; a drinking game can be made out of the egregious product placement this movie: just take a drink of your favorite alcoholic beverage (ideally, Pabst Blue Ribbon) every time a product or a product name (and that product/product name can be just about anything – an automobile, a beverage, video game, a location (a restaurant, a hotel) appears (in whole or in part) in a frame of this film and, come tomorrow, you will not remember blacking out at about the halfway point of this movie.

Midnight Madness was apparently produced by the Walt Disney Company (and yes, there is a product appearance/mention of a Disney character in here – take a drink!) although the Disney name is not mentioned in the product credits. The flick is a starring vehicle for then-Dr Pepper pitchman David Naughton (and yes, there is a Dr Pepper appearance in the flick – take a drink!) and a whole slew of other actors/actresses you have never seen before or since (although you may be surprised by which of the one or two actors/actresses who have continued to get work consistently since Midnight Madness).

This week our hosts at VHS Rewind lament that, as a vehicle for our man, Eddie Deezen, well, Eddie gets a bit lost in the sea of characters and subplots throughout this movie, but when Eddie is on-screen, it is Deezen gold.

Our hosts talk at length about Michael J. Fox, who has his first movie role in this flick. There is no hint of the Michael J. Fox we would all come to know and love. You may say it is the director’s fault for Fox failing to make an impression (there are a few bizarre scenes that are specifically about and involve Fox’s character yet Fox has no dialogue whatsoever (did it end up on the cutting room floor?)). Our hosts make the case that, in those scenes where Fox is allowed to speak, he sounds a big drugged (or, perhaps, blitzed on Pabst Blue Ribbon).

So grab a Pabst and give a listen to the newest episode of VHS Rewind!

One thought on “Midnight Madness (1980) #deezenpalooza”