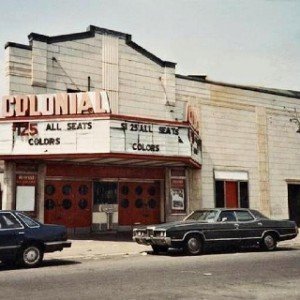 It was in a rotten part of town; the high-crime, low-rent section of South Philadelphia now known as Lower Moyamensing. The place has cleaned up considerably since (had to be about thirty years) but the old Colonial is no more; demolished in 1989. It looked like a palace in 1910 when it first opened. All glitter, all neon, art-deco lighting piping, beveled curves and thick red carpets, I could imagine the ticket-takers in red uniforms and little pill-box caps opening the double-doors for the next show. You’d probably get a newsreel, cartoon, two short-subjects, and a feature for a nickel. Even had a pipe organ in residence, just off to the side of the screen.
The pictures were the only place you could escape to in those days. No television, no internet, no cable. Even radio would be interrupted with little snippets of reality from time to time. News of the wars, tragedies, epidemics hung on the limited airwaves. So they went to the movies – en masse, flocks of the curious watching projected stories and eating popcorn and Black Cow chocolate caramels. People still dressed up for the movies. Men in suits with ties, and ladies wearing laced walking gloves and snoods.
All that changed by the time I walked through the double doors under the marquee. In big, red blinking lights, the word “COLONIAL” lit up dark Philly skies. South Philadelphia was very dark and flat at night and you could hear crickets. Strange that you could hear crickets in an area almost completely made up of row houses with very few trees.
It was creepy but well worth the rather long walk from my house. It was cheap. Anybody could afford it. I’m dating myself a bit, but I remember the shows were a buck a ticket, and it could be any kind of show – double features, triple features. I saw “Ghostbusters”, “Fright Night” and “A Nightmare on Elm Street 2: Freddy’s Revenge” on a triple bill for one dollar. I saw “Jaws” and “Jaws 2” for one dollar. So it goes.
This was not a multiplex with stadium seating. The seats sloped up to a point and then there was an enormous (off-limits around the time I was a customer) balcony that stretched to both sides. This could just be nostalgia since I was a young man, but everything looked big to me. I was amazed every single time I went through the double doors.
Time was not kind to the Colonial. It had fallen into disrepair starting in the late sixties. The thick, red carpet had worn down. There were gashes in the walls. The incredible chandelier hanging from the ceiling teetered threateningly, and even in packed houses, people moved away from it when the Dolby soundtrack of “Raiders of the Lost Ark” (due to the Lucasfilm theater alignment program) thundered and vibrated all across the room. The chandelier would shake and we would gulp and say silent prayers that the crystalline beast would not collapse and devour us all.
The homeless would sneak in after hours and help themselves to the Colonial’s comforts. There was the unmistakable odor of urine in the aisles. There was no maintenance or janitorial upkeep, so popcorn, candy, and sticky soda would litter the floors. In those later years, the Colonial had a roach and rat problem, but people still came to see the very cheap shows. A triple feature I was not permitted to see consisted of “Porky’s”, “Fast Times at Ridgemont High”, and “The Last American Virgin”. You might get the occasional trailer for a movie the Colonial was scheduled to show, but there were no commercials, no pleas from Roy Rogers for donations, and nobody telling you to turn off your cell phone and shut up.
In recent years, movies have been turned out to be more of an event. The rising ticket prices and 3D glasses, and the cattle-herding of audiences into and out of the theaters has transformed us into what we suspected we were all along – mindless consumers looking to kill two-plus hours in the dark. As early as the late 70s, Hollywood put all it’s money into the first weekend, and as the quality dropped, the prices for tickets went up dramatically, $15 to $20 (or more) a pop.
Repertory houses were the last thing we had that was close to the roadshow/Roger Corman rollout from many years ago. Movies would roll out in selected territories, do their business and move on, and not all the advertising money was spent in the first week. Very few prints were made (none of this 4,000 screen business), and very rarely did any of those movies lose money.
Sometimes I could hear the ghosts of old, shuffling in and out of the theater. You’d suspect there were well-dressed patrons, the sound of a big band down the street, sailors home on leave making their way into the Colonial to catch the latest James Cagney or Humphrey Bogart. With that news that more than 100 theaters will close by the end of the year because they refuse to make expensive digital improvements to their screens, the Colonial’s demise seemed to be the first warning sign that simply taking in a movie was going to be a thing of the not-so-distant past. 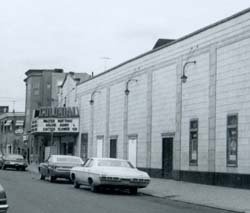