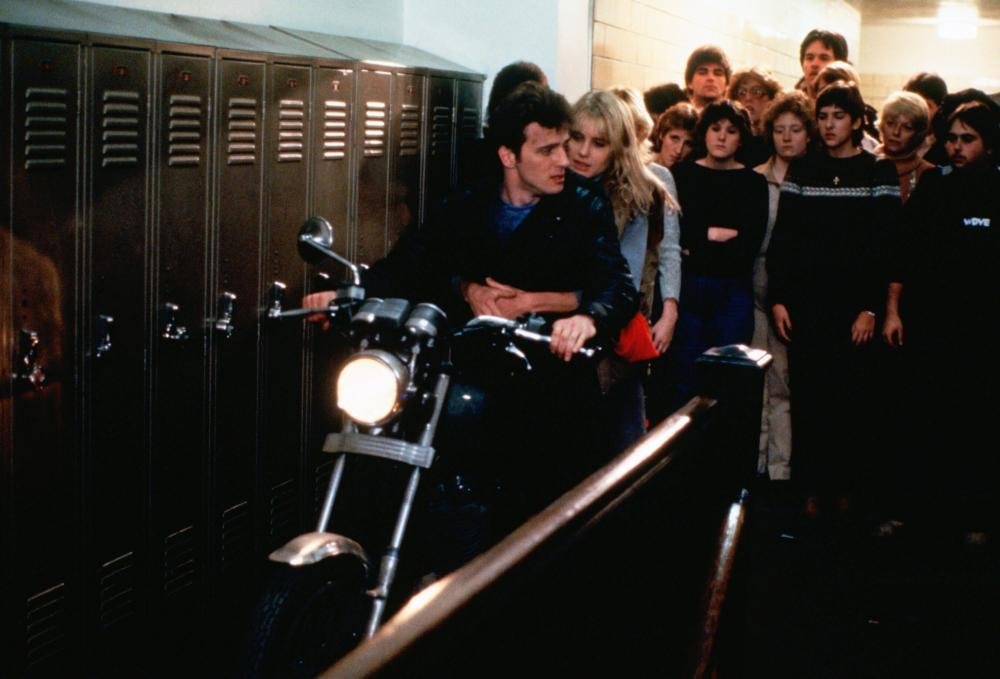 “Whatever happened to you, Rourke? You used to be normal.” 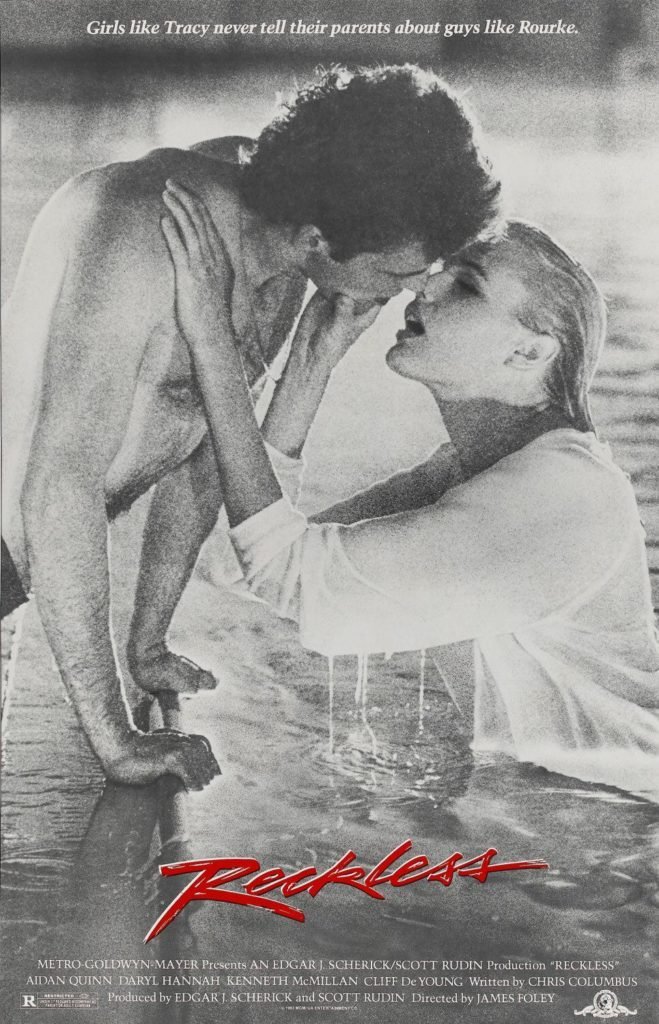 Aidan Quinn (in a recurring bit) finishes a can of Iron City beer, places the dented can at the edge of an overlook. He kick-starts his motorcycle, runs the vehicle to the edge of the railing, swerves and boots the can off the edge. He shouts in victory. You might say he’s … reckless. Daryl Hannah likes to drive with the top down even in the early winter. This looks like a steel town on a Saturday night, and Aidan’s looking for the fight of his life. There’s a definite separation of classes here: the rich but powerful minority, and the rest which we would classify as the “working poor.” Daryl’s boyfriend Adam Baldwin (in a change of pace) is a privileged kid with a nice job waiting for him after high school, courtesy of his old man. There’s a lot of familiar faces in Reckless; Haviland Morris, Jennifer Grey, Dan Hedaya, Cliff De Young. Other than Quinn and Hannah looking way too old to inhabit the bodies of high schoolers, Reckless is an endearing and genuine movie, less Breathless and more Baby, It’s You in the category of tormented rebels. This was a popular sub-genre in ’80s teen movies.

Baldwin and the popular kids do their level best to humiliate Quinn, especially after Baldwin notices his interest in Hannah after he watches her practicing her gymnastics. After Quinn and Hannah are randomly selected as “dates” to an upcoming dance (I don’t know how that’s supposed to work), despite Baldwin trying to rig the dance, the two kids get to know each other. Quinn’s old man (a fantastic Kenneth McMillan) gives him a five for the dance. He’s not up on economics. A five won’t even get you a pack of Trojans. At the dance, Daryl’s all dolled up in a hot red number, and Quinn’s wearing his Dad’s best blazer. Quinn swaps out Larry Graham for Romeo Void, and we get a great, classic ’80s dance sequence, which plays as more of a ritual mating practice than entertainment. Baldwin, in a jealous rage, tries to break up the dance but he’s playing with the fires of passion! She hops on the back of Quinn’s motorcycle, and they’re off to the races. He takes her to his favorite spot: the overlook, where he tells her he likes being scared, which isn’t creepy at all. Quinn plays the street-punk asshole with her, which only makes her more curious about him. Why do the good girls always like the bad boys? 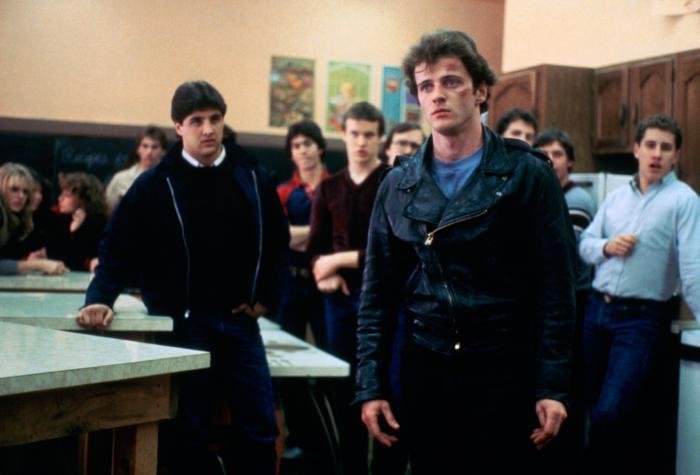 After a nice burst of story and tension in the first act, the movie settles in for some remarkable character examination. Baldwin is a control freak who routinely affronts his prize girlfriend. Quinn’s old man is a raging alcoholic in danger of losing his job (and his life) at the plant. His football coach (De Young) tries to bust his balls but finds himself humiliated by Quinn’s sharp wit, so he cuts him from the team. Believe me, I know how that feels. The Quinn performance works because you understand what he’s going through, unlike Richard Gere in Breathless, who comes off as unnecessarily obnoxious. He gets thrown out of his house by his Dad after he chews him out for spending his day off from work with a floozy. Meanwhile, Hannah can’t seem to cope with the lack of adventure and excitement in her life. They meet up and break into the school, dig through the confidential files, get drunk and vandalize school property while Kim Wilde’s “Kids in America” plays in the background. This is the one scene I remember verbatim from this movie. It’s an exceptional moment right up there with The Breakfast Club for de-coding teen angst. Their love scenes are crazy-hot and feel real to me. 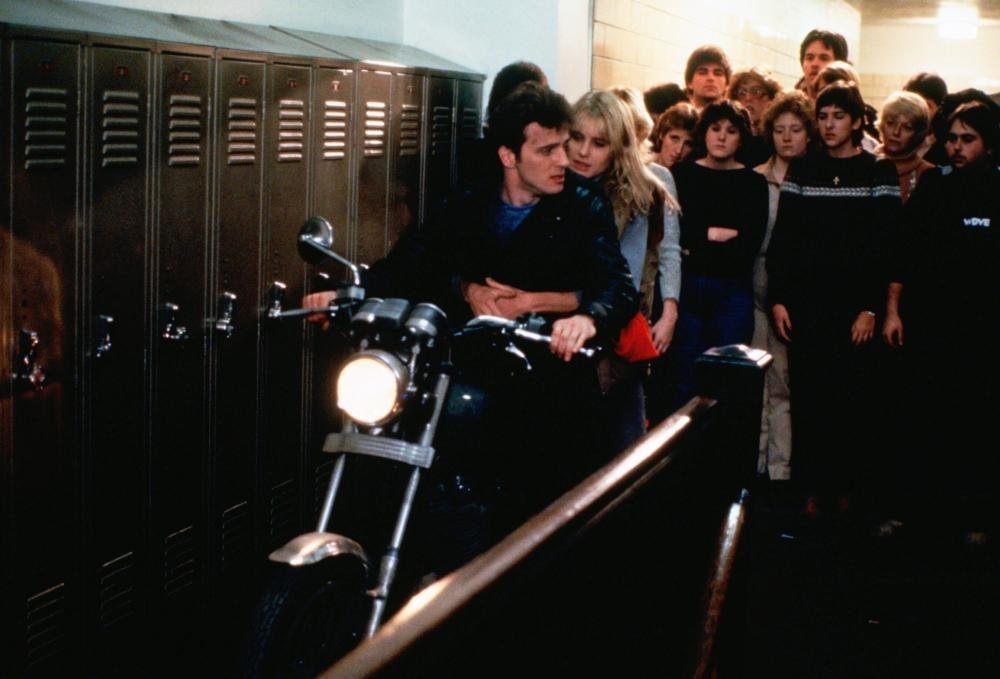 It seems Hannah and Quinn are on divergent paths. She’s on the fast track to college, credit cards, and adulthood, and he is going nowhere doomed to be trapped in the town that killed his father. They clash when he calls her out for perceived privilege and a “fake” existence. It’s been done a million times before and after, but Reckless is a superior example of this kind of culture clash. This movie knocked me on my ass. Working from Chris Columbus’ (yes, that Chris Columbus) script, James Foley’s directorial debut is remarkably confident. He knows he has lightning-in-a-bottle with Quinn and Hannah, so he keeps the focus on the two young leads while other characters dance around them. The movie was edited by Albert Magnoli, who would only a short time later direct Purple Rain. The beautiful naturalistic photography was achieved by Michael Ballhaus. Foley would go on to direct At Close Range, Glengarry Glen Ross, and later, the Fifty Shades of Grey sequels. Columbus, of course, would later direct the first two Home Alone movies, Mrs. Doubtfire, and the first two Harry Potter movies. I guess Kevin Smith was right. In Hollywood, you kind-of fail upwards.