“You are at your very best when things are worst.” 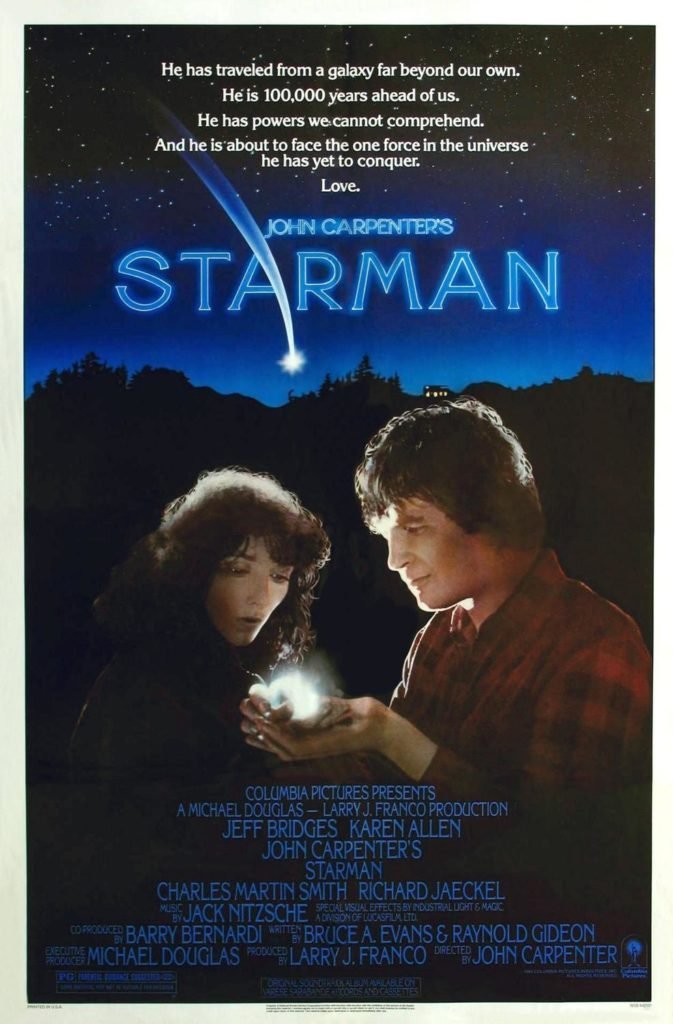 In 1977, the Voyager space probe was launched containing examples of Earth’s excellence, not the least of which is a golden vinyl pressing of The Rolling Stones’ “(I Can’t Get No) Satisfaction.” The disc includes examples of our DNA, maps, photographs, and message from the children of Earth. A few years later, an alien spacecraft crashes in a Wisconsin bay, near the home of the recently widowed Jenny Hayden (Karen Allen), who spends most of her nights mourning her dead husband, Scott (Jeff Bridges) by drinking herself silly and watching old home movies. An alien lifeform (what appears to be a glowing silver ball) emerges from the crash and enters the Hayden homestead. The lifeform finds a photo album and clones itself from a lock of Scott’s hair. In a terrifying bit, Jenny wakes from her drunken stupor to see a naked infant quickly grow into full manhood. She promptly passes out under the weight of what must be a hallucination.

In short order, our Military is tracking the crash of the ship. NSA director George Fox (Richard Jaeckel) and SETI (Search for Extraterrestrial Intelligence) scientist Mark Shermin (Charles Martin Smith) rush to recover the craft and determine the plotted trajectory of the alien ship to be the Barringer Crater near Winslow, Arizona. “Starman” essentially abducts Jenny and forces her to drive him to Winslow so he can make an important rendezvous. Their dynamic is built on her fear of this familiar-looking creature: an alien made to resemble her husband. You can see the torment in her face as she tries to reconcile the fact that this creature is a child in man’s body; a new life in a dead man’s body. She attempts to ditch him, and she tries to run. He tells her he means her no harm, and she believes him. The dynamic changes to one of mutual fugitives on the run from the law, and we get into familiar John Carpenter territory. Up until this point, other than the cinematography and synthesizer-driven score, this movie could’ve been made by Steven Spielberg or James Cameron. 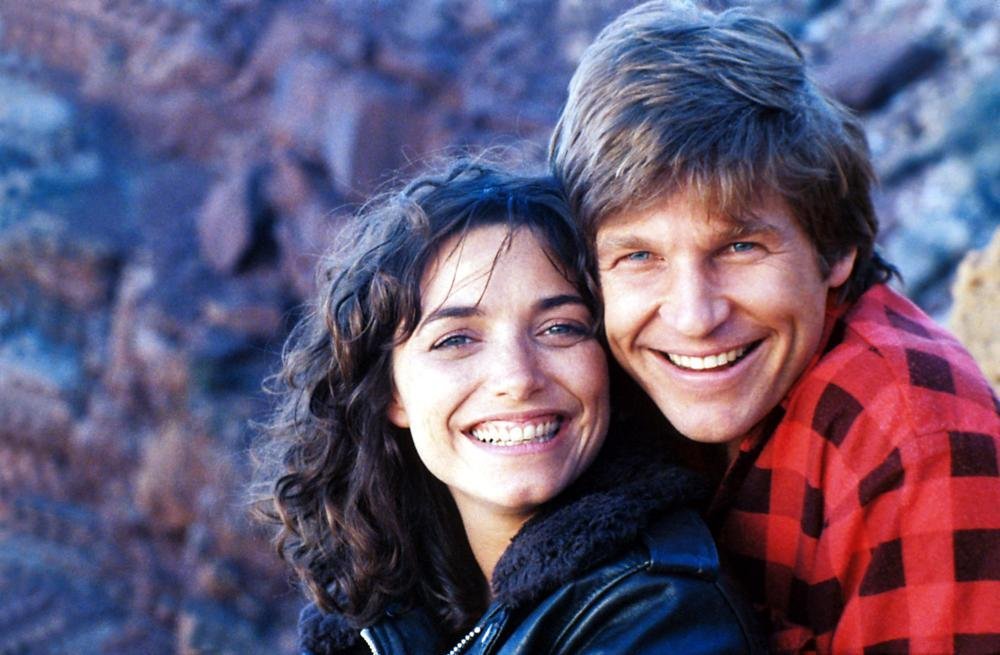 John Carpenter has a specific gift for ratcheting up the tension, and he tells the story from the point of view of a confused and lonely protagonist in Jenny Hayden. Karen Allen is truly one of our most underrated actresses. Her only other big role in this time period was as Marion Ravenwood in Raiders of the Lost Ark; a role she would reprise in 2008’s Indiana Jones and the Kingdom of the Crystal Skull. If there was one word I would use to describe her, it would be “real.” She is perfect in the role of the audience’s surrogate as she reacts to all of “Starman’s” antics. Her wide, expressive eyes marvel at miracles, large and small, and the movie clings to her chemistry with Bridges. As she begins to possibly remember her attraction to her husband via “Starman,” she tries to leave him again with her money and her keys in the hopes he will go undetected without her accompanying him the rest of the way. Bridges learns the meaning of self-sacrifice. “Starman” and Jenny make love in a train car and she becomes pregnant, despite her infertility. Later, with no money and no car, they arrive in Las Vegas, where Bridges tinkers with a slot machine and wins them $500,000.

Charles Martin Smith is hot on their trail and places Fox’s men around the diner where they are eating. As Fox had revealed his intention to study the alien by means of autopsy even though the aliens were technically invited to study Earth, Smith has had misgivings about his assignment. When “Starman” tells him he finds humanity to be beautiful, Smith decides to let them go. In a hilarious bit, they both kiss him and thank him for letting them go. The movie is in turns scary, tragic, and humorous. Pretty much the human condition right there. Think of Starman as a sexy version of E.T., but I would argue Starman is the better movie for offering a richer story about adults rather than children. Starman was nowhere near as successful as E.T. at the time of it’s release, but it was a popular HBO exclusive and video rental. The Jeff Bridges performance is one of innocence and curiosity. The closest analog, for me, would be Brent Spiner as Data in Star Trek: The Next Generation. Both characters embrace humanity and learn to mimic it, with difficulty. The only difference being that “Starman” can produce a child biologically with Jenny Hayden. Bridges received an Academy Award nomination for Best Actor. Every day John Carpenter isn’t making a film is a loss to us all.