“Come do anything to me your little heart desires!” 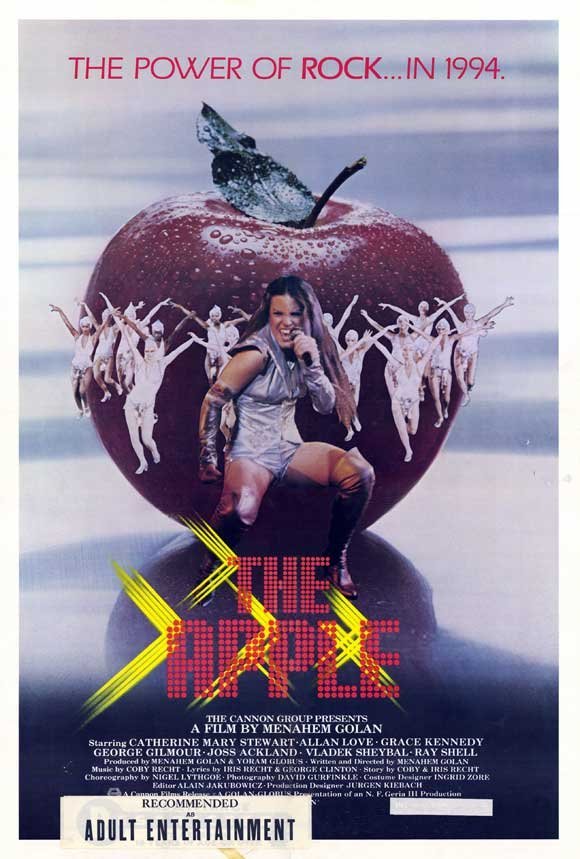 Wow. Just … wow. I don’t know where to go into this except to start off with complete ’80s overload; v-necks and shoulder pads goose-stepping in interesting formations. There ain’t no pleasure, there ain’t no pain. Uniformed space cadets straight from the Ace Frehley/Patti LaBelle Academy dance and wreak havoc on outsized stages, singing “Hey, hey, hey!” to cheering crowds. This is the latest thing! I have to believe it because it scored 150 heartbeats, which must be some kind of currency, but I don’t think I’ll ever be sure. I wonder if this is a structured society or simple commentary on our collective lust for trends. I might be reading too much into it. After this space orgy ends, next is a simple couple (Catherine Mary Stewart, George Gilmour) and an acoustic guitar (with orchestral backing) singing a song of love that earns jeers and boos from the crowd. They don’t like The Brady Bunch. Love is a universal melody and we belong to each other, but fuck ’em – there’s no money in love! Pay attention to the lyrics. The audience starts to like what they’re hearing and the heartbeats go up! Couple of kids from Moosejaw. Who would have though it? 151 heartbeats! The producers sabotage the simple couple from Moosejaw and their heartbeats go down. They leave the stage because they think the crowd is booing them off.

Frustrated with their lack of options, the simple couple seek out an influential sage who will guide them to success. It’s interesting to me they wear regular clothing, jeans and jackets, while everybody else is decked out in lunatic-duds. The forces of evil, a mega-conglomerate known as the “BIM,” set about corrupting the duo with pills and sexual propositions. In the middle of all of this is a musical with some actually decent songs that propel the narrative. Of course it isn’t a particularly original narrative (somewhere between The Phantom of the Paradise and Shock Treatment) but it is visually striking. This is a New Wave musical as if directed by Fellini. It’s Ziggy Stardust meets Amarcord. The music scene as visualized for the year 1994 in The Apple was off by 20 years. 1994 in music was a hodgepodge of folk, emo, grunge, and darkwave, diminutive yet theatrical with a newfound respect for the British explosion and less focused on fashion and choreography. Catherine Mary Stewart is essentially the Jessica Harper of this enterprise. Harper (in The Phantom of the Paradise and Shock Treatment) is the innocent girl thrust into the spotlight and corrupted by “creative” excess, though Catherine appears stronger than Harper.

The forces of evil (aka “BIM”), of course, offer the duo a recording contract and a trip to the west coast. They deck Stewart in a glittering dress and leave Gilmour almost naked. They offer Stewart the “apple.” An actual, really big, apple, and we can see the Biblical connotation unraveling. Is it requisite that she bites into the apple and accepts the evil? I’m guessing. I hope I’m right, because then the movie will satisfy my demand for literalism. What I don’t understand is the song that accompanies the action of biting into the apple. The lyrics, which reference vampires and demons, seem to suggest this is an extremely dangerous choice to make. Is it really that bad for Catherine and George? The Roger Daltrey/Robert Plant-like singer who seduces Catherine compels her to “take the apple and take a bite.” George is disgusted. He walks out and refuses to sign any contracts. With the “BIM” label brandished on her forehead (a glittering triangle with rounded edges), Catherine begins her recording career. They give her Vulcan eyebrows and drape her with dead animal skins. Wait a minute, Catherine! What happened to love being the universal melody and us belonging to each other? What the fuck is your problem? Only Menahem Golan can answer that question.

When she gets up on stage, singing about America (and it’s correlating dependency on drugs) in a strange perversion of Neil Diamond, she just looks like the rest of those fools. She’s lost her individuality and her love for love! She’s a tool. Meanwhile, “BIM” has acquired such power that anybody not wearing their signature label is given a ticket and fined. I don’t get it. Is this what would happen should the Music Industry gain true power? Is this supposed to be the Illuminati with their bizarre hand signs and lizard eyes? It seems everyone else is living in squallor while the elite dance with happy, programmed feet sipping champagne out of weird glasses in ivory towers. This is actually a good movie! So much of what we see has been replicated in recent movies and television shows. George struggles with his career. He misses Catherine. Well, who wouldn’t? In the torrents of her success, he tries to reach her but is beaten by BIM goons for his trouble. In a bit of Xanadu-inspired musical madness, they sing to each other from different locations: she in a luxurious penthouse, and he in the gutter, and we know by the end of the movie, these crazy kids will make it work. Menahem Golan (and his cousin Yoram Globus) had been unfairly characterized as low-budget schlockmeisters with the Cannon Group, but The Apple is quite staggering as a piece of modern art. The Apple is a fun (if bizarre) cinematic statement, and is worth it just for Grace Kennedy’s erotically-charged over-the-top show-stopper, “Coming.” Yowza!