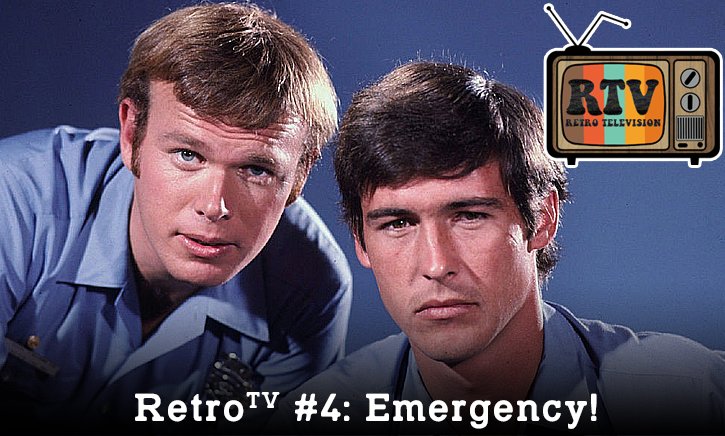 This is our new podcast series!  I hope you enjoy it!

Episode 4 of RetroTV is here and today Chantelle Dubois Nishiyama joins me to discuss the television show, “Emergency!”

Emergency! ran from January 15, 1972 until July 3, 1979 on NBC. In this Season 2 Episode 10 episode entitled, “Dinner Date” one must have a keen eye to spot a very young Melissa Gilbert in her very first television role! She is the little girl with the Mercury Astronaut doll.

“Roy tries to set John up with his wife’s cousin. An epileptic woman nearly hits a child when he rides out between two parked cars; the ensuing emotional trauma throws her into a mild seizure. A man shoots his son-in-law when he discovers his daughter was married and pregnant without his knowledge. Drug and alcohol addiction rears its’ head in four cases: A woman suffering from gangrene in her hand, an alcoholic who collapsed at his home in a hepatic coma, a girl poisoned by taking pills laced with sodium hydroxide, and a man suffering from tetanus. Other rescues include an obese man whose pacemaker failed and freeing a asthmatic child whose arm got stuck in a swimming pool drain, with the help of Dixie, Dr. Early, John and Roy, while in the hospital.”

Thank you Chantelle for discussing this exciting and often tense show!

Special thanks to Levi Mitchell for lending his design skills to our RetroTV logo!
You can check out his incredible work at:
https://www.instagram.com/zuck505