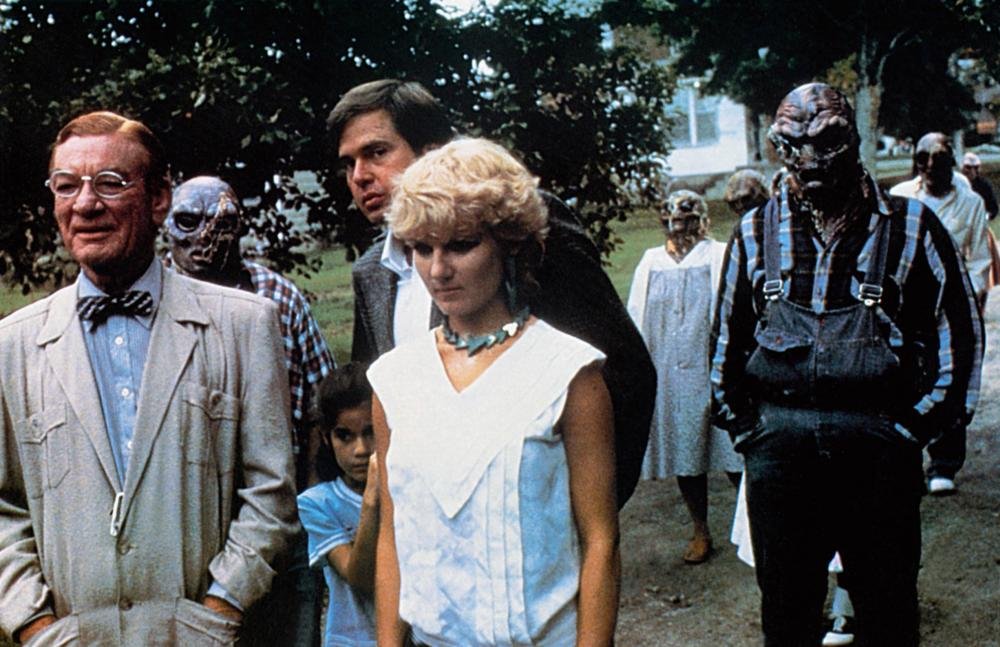 “Three-headed dogs are big, but aliens?  Well, aliens are passe’.” 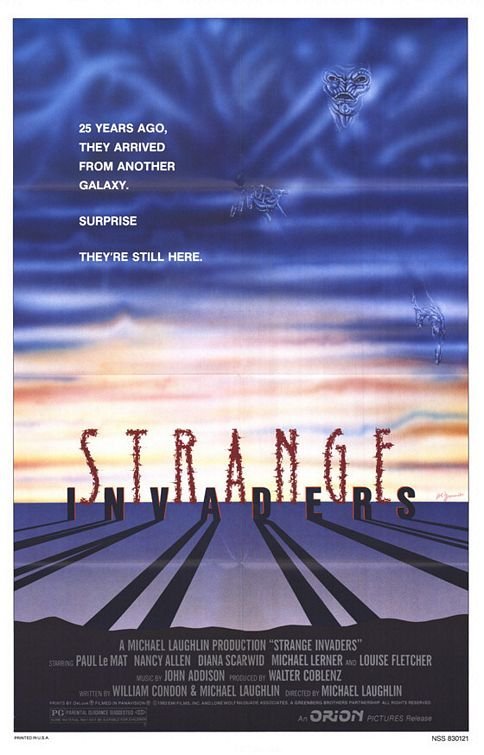 1957-58, young couple listens to rock music and makes out while aliens wreak havoc in a small Illinois town called Centerville (“A real great place to raise your kids up!”).  The boy takes the girl home.  The boy goes to his own home to find everybody gone.  The television is on.  The bathtub is filling up, and nobody’s there.  The creepy shadow of an alien hand reaches out to grab the young home.  He screams.  We jump forward some 25 years later to Columbia University and sports-coat-with-patched-elbows professor Paul LeMat teaching a course in entymology.  Ex-wife Diana Scarwid shows up at his suspiciously spacious New York apartment, tells him she has to go home, to Centerville, on family business, and leaves their daughter, Elizabeth with him.  She never comes back, so Paul sets out to find her.

Paul arrives in Centerville to find a strangely quiescent town. Main Street is a ghost town, and the few people he does run across seem … a little off.  There’s a deserted, yet well-kept church.  The kids in the town have a “retro” sensibility.  They looks like transplants from the ’50s.  They all stare at him.  He’s obviously not welcome.  His car breaks down (of course) so he kills time in an old-school diner.  The people in the diner seem like mannequins, or seat-fillers.  He looks out a window and sees his car being destroyed by what looks like a lightning bolt.  He takes off in a stolen antique car and notices some of the townspeople have turned into weird, reptilian anthropoid-like creatures.  He is arrested by local law enforcement.  Some time later, people from Centerville have chartered a bus to New York.  They are revealed (in somewhat short order) to be aliens.

LeMat returns to New York to find his apartment ransacked.  His ex-wife is still missing.  He looks up his local bookworm on the subject of extra-terrestrial life who puts him in touch with resident UFO nut, Louise Fletcher.  She tells him no one has lived in Centerville (officially) since 1958 when a tornado struck the town.  This is weird.  At a news kiosk, he picks up a tabloid paper with a picture of an alien that looks an awful lot like the ones he encountered.  He looks up the writer (Nancy Allen) of the article.  She informs him these articles are bullshit.  The picture was found in their files, so they ran a story to go with the picture.  He leaves in a huff, even after she hits on him.  Nancy goes home, and is beset by alien lady, cleverly disguised as an Avon representative who kills her super (Wallace Shawn, in a fun bit), and calls the cops, but they can’t find a body.  After watching The Day the Earth Stood Still, Nancy becomes convinced.

Nancy and Paul hook up and talk shop.  Paul speculates about the aliens and their motivations.  After cocktails, they go back to his apartment and get sexy, but they are interrupted by Scarwid finally showing up in a freakazoid panic.  Scarwid is looking for their daughter.  Scarwid confesses she’s an alien, that she was sent to study the Earth, but she found she enjoyed our planet (as I do), got married and had the baby.  The divorce made it tough on her (as it does) and her family.  The aliens follow Nancy back to LeMat’s apartment building.  She shoots one of them and it spouts horrible green blood!  Scarwid sets up a diversion so Paul and Nancy can escape.  Along the way, Louise Fletcher picks them up and informs them our Government and the aliens have an “arrangement” – they provide us technological advances and we give them a place to live.  Now it’s up to Paul and Nancy to go back to Centerville and get tot eh bottom of this crazy mystery.

Strange Invaders is every great science fiction movie ever made in the ’50s and early ’60s.  Replete with paranoia shared en masse and unified only by the times those movies and this movie were made in – the ’50s and the ’80s.  The film’s opening crawl illustrates that point effectively: “It was a simple time, of Eisenhower, twin beds, and Elvis from the waist up — a safe, quiet moment in history.  As a matter of fact, except for the Communists and rock-and-roll, there was not much to fear.  Not much at all … until that night.”  Strange Invaders had the kind of fun as a movie that The Rocky Horror Picture Show enjoyed; interpretation of classic paranoid science fiction extrapolated with fresh eyes and placing it in modern context.  The music, editing, and performances perfectly capture the nostalgic narrative.  This is a fun, fast-paced movie.