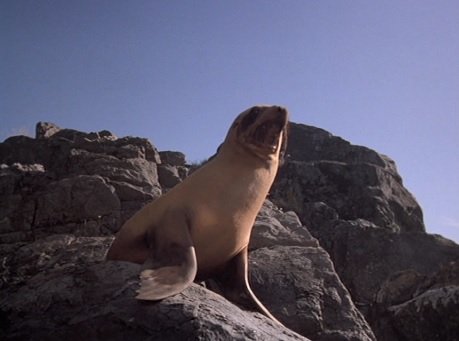 “Men who owe money have souls that float face down.” 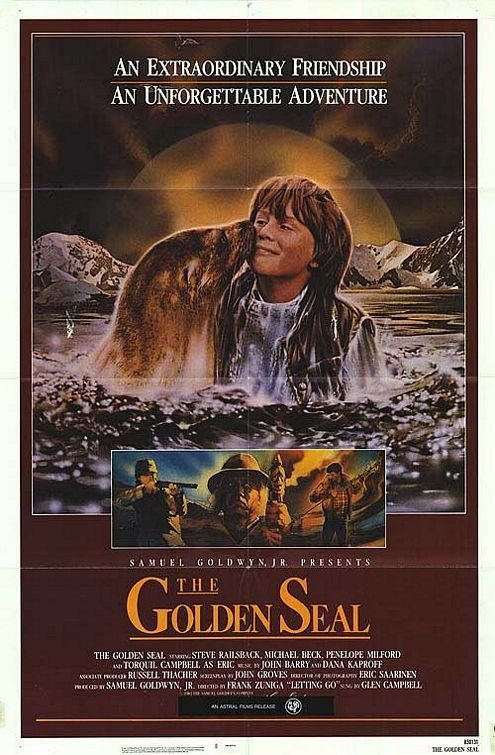 Steve Railsback is a creepy guy! I can’t get past his chilling portrayal of Charles Manson in the 1976 television mini-series, Helter Skelter, nor his turn as Duane Barry in two memorable X-Files episodes, and even the comparatively sweet, sentimental charms of a “family” movie like The Golden Seal do little to assuage my anxiety. He’s a fiery, dynamic presence – always memorable – in every role he plays. Here, he’s salmon fisherman Jim Lee, who lives quietly with his young wife (Penelope Milford) and their son, Eric ( (Torquil Campbell) on the Aleutian Islands off the treacherous coasts of Alaska.

Times are tough. Jim’s getting pennies on-the-dollar for his hard-fought bounty. Salmon fishing is rough. His peers give him a hard time for not retreating to “the city (whatever that is).” For years, he’s heard stories about a mythic “golden seal” (not golden, according to my wife, who chimed in many times as we watched the movie). It is golden, when roaming the sea, and when the sun hits it just right. Jim swears to have seen one of these beauties seven years before. During a particularly intense, frightening storm, Eric is separated from his father (who persists in calling him, “Boy,” which is unusual) and spots the creature, which is a pregnant female. He offers it shelter, feeds it, and assists it in giving birth to a pup.

When the kid returns home with stories of the golden seal, Jim’s eyes light up (for reasons that are not explained until the climax of the second act). Meanwhile, Michael Beck’s shifty Crawford enters the camp on the pretense of losing his boat in the storm. While our initial impression is that he’s simply another rooster in the hen-house (given his come-ons to Penelope), we quickly realize he’s out there to find the golden seal. Their pelts apparently fetch a pretty penny. Eric shows the seal and her pup to Jim, who tries to shoot them. The child protects and defends the seals. You just don’t get it, Kid! Times are tough!

The third act sets up a revelatory conflict. When Beck grabs his own gun on a mission to assasinate a couple of golden seals (apparently Olivia Newton-John did nothing for him), Jim must protect his son by protecting the seals. He must eschew his bloodlust for the seals and their pricey pelts, and beat the crap out of Michael Beck (he could use a muse right about now), and this is when your “traditional” Railsback performance kicks into gear. He may be a loving, sweet father and husband to his family, but if you piss him off, Charlie and Duane better watch out! The Golden Seal is a well-made, beautifully shot movie that takes it’s time setting up a story.