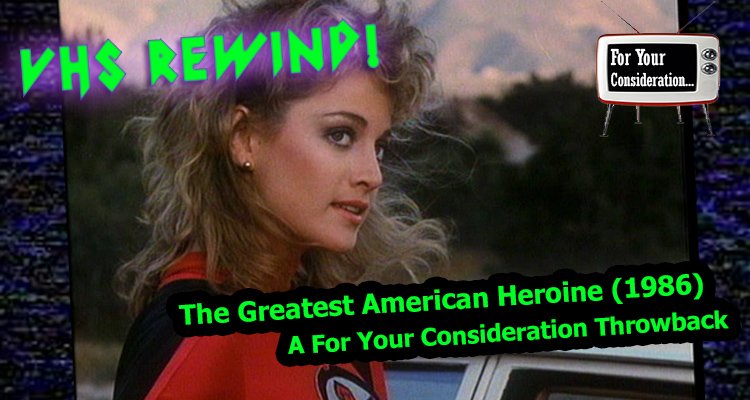 VHS Rewind!
The Greatest American Heroine (1986) - A For Your Consideration Throwback

In this throwback from the FOR YOUR CONSIDERATION podcast archives, Mark and Chris discuss The Greatest American Heroine pilot episode that originally aired back in 1986!

During 1986, the original principal cast reunited for a pilot movie for a new NBC series to be named The Greatest American Heroine, which did not result in a new series, and the pilot was never broadcast by NBC. Ultimately, the pilot was re-edited as an episode of the original series (complete with original opening credits and theme), and added to syndication sets of the original series aired on several local television stations in the late 80s, for which it is the final episode. Immediately after the beginning credits, the episode’s title card is superimposed over a nighttime view of the Los Angeles skyline, reading “The Greatest American Hero” before appending the letters “i n e” individually to the sound of the NBC chimes. The chimes were a nod to NBC and its president, Brandon Tartikoff, who had expressed interest in reviving the series.

The pilot movie reveals that several years after the final episode, Ralph’s secret identity was finally revealed to the public, resulting in his becoming a celebrity. This angers the aliens who gave him the suit, and they charge him with finding a new hero to wear the costume and use its powers for fighting evil. Once the transfer is made, they explain, all memory of Ralph’s exploits will be purged from the world’s memory and remembered only by Ralph, Pam, and Bill.

Bill begins their search by researching people with desired hero qualities, but Ralph finds a young woman named Holly Hathaway (Mary Ellen Stuart), an elementary school teacher who spends her off-hours time looking for lost kittens, raising environmental awareness, and serving as a foster mother. Bill, Pam, and Ralph meet in the desert, where Ralph tells Bill about Holly. He reacts visibly to his new partner being a “skirt” before Holly arrives, flying in wearing a new version of the suit made for her, and she pledges to help Bill. The original trio say their final farewells, and even the stoic Maxwell reveals his true emotions as he says goodbye to Ralph and calling Pam a trooper—”…one of the best!” Holly reacts emotionally to the fond farewells, but breaks the somber mood as she accidentally pulls the door off of Bill’s sedan.

The rest of the episode deals with her learning how to use the suit with Bill Maxwell’s guidance, and the pair trying to develop a working relationship. It ends with Holly talking to her foster daughter about Bill, saying he is a good person; Bill, overhearing what she says about him, speaks into a recorder he uses as his “diary” to suggest that maybe she is the right person to wear the suit after all.