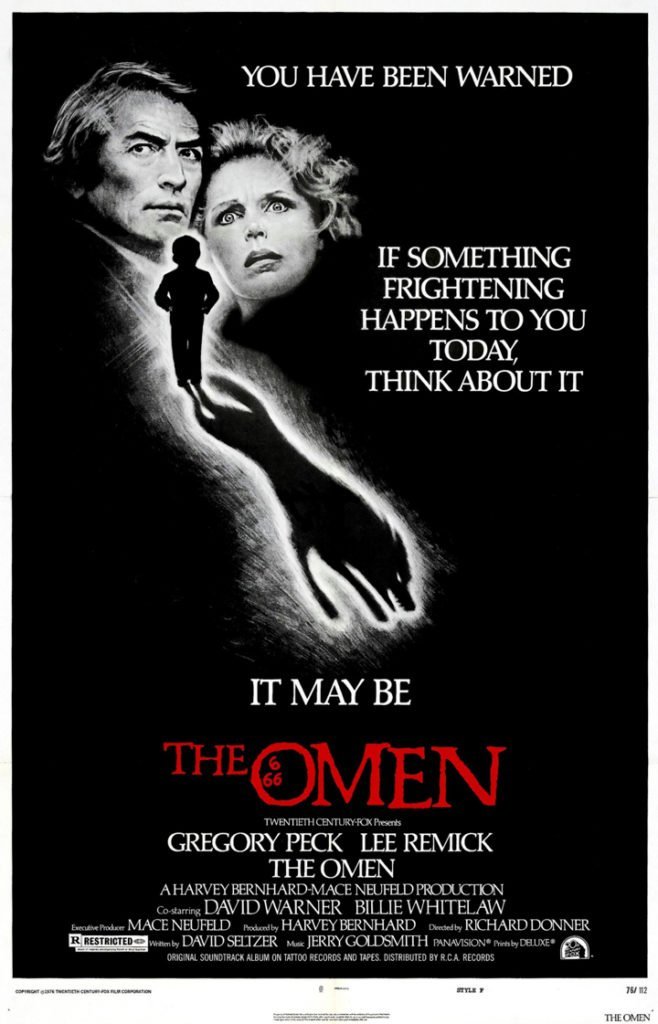 I remember a funny story Richard Donner told while being interviewed by The Movie Channel upon the broadcast of The Omen. He said he planned for the final shot of Damien at his father’s funeral to have a simple fade-out on the boy observing all the powerful politicians in attendance and then the credits would roll. Instead, the kid (Harvey Stephens) turns and looks at the camera and smiles. The moment sent a chill up the director’s spine so he kept it in the movie. It was just one of those happy accidents film directors are sometimes gifted. On it’s own merits, The Omen is more often than not, schlocky. The embarrassing and unnecessary 2006 remake starring Julia Stiles, Liev Schreiber, and Mia Farrow is even more so; substituting this version’s beautiful photography and deliberate pacing for over-saturation, jump scares, and terrible performances.

Gregory Peck (who allegedly turned down a salary in exchange for box office percentage points) plays American diplomat Robert Thorn. His wife (Lee Remick) gives birth but the baby dies (or so he is told) so he arranges to adopt a child in it’s place rather than upset his wife. Soon after he is transferred to the United Kingdom and Damien grows. On the occasion of Damien’s birthday, his nanny kills herself after locking eyes with an evil-looking dog. Well, that’s peculiar. Thorn is visited by a creepy priest who insists Damien is the son of Satan, the Antichrist. This freaks out Peck, as it would freak out me, my wife, and everyone around us if we were given this information. If I were the priest, I would’ve started off with a series of urgent letters, each becoming more and more ridiculous until I had to finally meet the guy. Peck, being a rotten cheat politician assumes he’s being blackmailed. I think God would look poorly on blackmail.

Meanwhile groovy photographer David Warner has been tailing Peck and Damien. He snaps a photo of the priest as he is escorted off the ground and sees a strange “photoshop” in the picture after he develops it. Apparently, the priest is going to be impaled shortly. His camera must be evil! The Thorns hire creepy new governess Billie Whitelaw to replace the lady who killed herself. Billie has unearthly powers over the evil devil-dog and wields an amazing amount of control over young Damien. The Thorns want to take Damien to church, but Billie advises against it. On the way to church, Damien flips out and suddenly gets a temperature. That’s not a good sign, is it? Nor is the evil devil-dog who constantly guards Damien’s bedroom door and growls at everyone but Billie, who defies the Thorns at every turn. Mom takes Damien to the zoo and he scares the giraffes and makes the baboons go nuts. The movie goes along like this as a series of episodes until Warner enters the picture with his Twilight Zone camera.

Poor Lee Remick! Already on the verge of a nervous breakdown, she becomes pregnant, falls from a high ceiling (with Damien’s help), miscarries, and is then pushed out of a hospital window, where she mercifully dies. It’s interesting how much ill fortune can befall a family who just wanted to have a kid! I mean, good Lord! This big budget spectacle is over-the-top in it’s depictions of violence. Warner isn’t spared either. You might say he loses his head! Thank you! I’m here all week! Donner directs Dvaid Seltzer’s original script with tongue planted firmly in cheek. In fact, you could re-cut this movie as a comedy and lose nary a narrative beat. Even scenes of tragedy are somewhat raucous and could be played for laughs. Still, The Omen is a lot of fun. Due to his experience as a television director, and with only three feature films to his credit, Donner (beginning with The Omen) would become a premier director-producer for Hollywood in ’80s and ’90s with films such as Superman, The Goonies, Ladyhawke, and the Lethal Weapon franchise.

Next up – more wolf stuff!