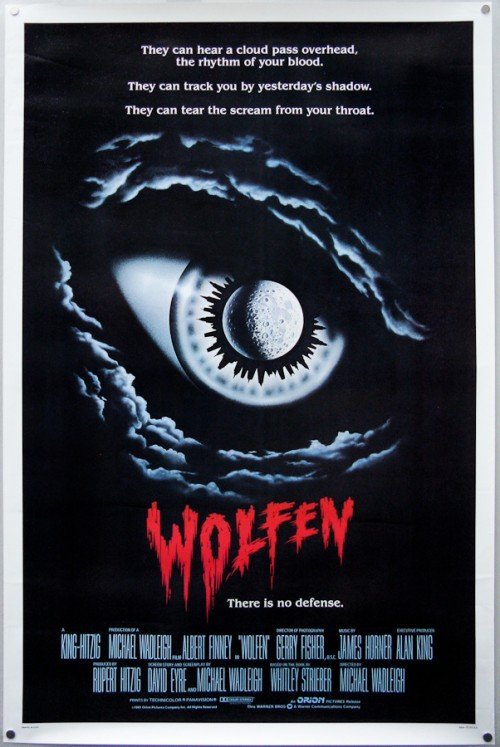 Albert Finney loves to eat! I mean, he loves food. There is nary a shot in Wolfen (at least up through three-quarters of the movie) where Finney doesn’t have something in his mouth that he is chewing. Come to think of it, a lot of people in this movie are eating something. The problem with a filmmaker like Michael Wadleigh (Woodstock) is you don’t know if he’s making a comment, or if he’s just being cheeky. Wolfen is very much a “social justice” type of movie, before such a thing became fashionable. Beautifully shot and visually spectacular in showing us a New York City that no longer exists, Wolfen isn’t really a werewolf movie; more a schizophrenic shape-shifter movie.

A series of brutal murders kicks off with a rich real estate developer and his well-dressed wife. Cop Dewey Wilson (Finney, with an obviously affected New York accent) is called in to investigate. Criminal psychologist Rebecca Heff (striking Diane Venora) and soul brother Medical Examiner Gregory Hines join Dewey as he attempts to unravel clues (some of which are quite clever) as to the identity of the perpetrator or perpetrators. Along the way more bodies fall, and despite the Mayor and Dewey’s superior, Warren’s (great character actor Dick O’Neill) assertion that the murders were conducted by “terrorists,” Dewey is convinced the murders are linked to a development project in the Bronx. This is where the movie loses me.

The scenes of contemporary Bronx (in 1980/1981) are horrifying; buildings torn apart, scenes of devastation, dilapidated structures and foundations. The decay doesn’t do anybody any good, and it’s looks crazy dangerous to boot. Why protest the demolition of this place in order to build up newer, safer, and more practical properties? The Bronx depicted in this movie is a war zone. It looks like it’s been hit with a hydrogen bomb. I understand the need to preserve culture and history (provided that culture and history is preservable) but when a conglomeration of progress, entropy, and indifference all collide to topple buildings, why let those buildings rot? Regardless, the local “Indigenous” population (that’s 2017 Newspeak slang for American Indians) are, dare I say it, restless, and do not approve of these developments.

Leader of the pack (so to speak) is Eddie Holt (Edward James Olmos with his creepy eyes), who boasts to Finney that he and others are capable of shape-shifting (the ability of a being or creature to completely transform its physical form or shape – thanks Wikipedia!). Finney and Hines (with the help of liberal naturalist/white-guiltist Ferguson, played by Tom Noonan) deduce that the attacks were perpetrated by wolves, or wolf-like creatures. From the audience’s perspective, Olmos looks like a nut-case, but the murders are all too real, and Finney has no other suspects. There is no real resolution to this narrative other than that Finney guesses the wolves will be placated if he makes a grand gesture of destroying the impressive model demonstrating the construction. This works as the wolves all howl to each other and take off.

Wolfen is beautifully photographed by Gerry Fisher with Panavision lenses. New York City is an ominous landmark with a topography similar to animal habitats with high peaks and low valleys represented by buildings in various states of decay. The wolf “point-of-view” appears to be a form of solarization or thermal photography and traverse is shown as a series of Steadicam shots. There are plenty of symbolist visual markers in the movie; the most pronounced being the similarity between the state-of-the-art lie detector technology used by the cops and the wolf’s vision, which seems to show that wolves can see when other creatures are being deceptive. Unfortunately, there are too many inconsistencies with regard to character motivation to justify the plodding narrative.