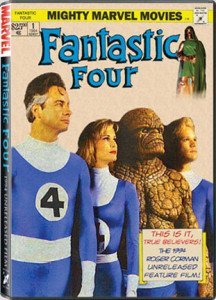 Much muck has been churned recently over the burial-at-sea (or muck, as the case may be) for 1994’s “Fantastic Four” comic book adaptation directed by Oley Sassone, exec-produced by the big man himself, Roger Corman, and his Concorde-New Horizon Pictures (beloved for the “Deathstalker” series, the “Carnosaur” series, the “Barbarian Queen” series with the late Lana Clarkson, and any number of bizarre sex thrillers starring Marc Singer, Julie Strain, or Shannon Whirry).

Concorde took a step backward producing “Fantastic Four”, and by step backward, I mean fronting a (comparatively) enormous budget for what would be considered a mainstream movie based on previously published and/or written material. In this case, the celebrated Marvel comic book created by Stan Lee and Jack Kirby in 1961. Despite the success of the Superman and relatively new Batman movie franchises for Warner Brothers and Detective Comics, movies based on comic books and graphic novels were not in the mainstream … yet. It would take another ten years before we would begin to notice that every other movie on the list of box-office hits was adapted from either a comic book or a Gen X’er’s toy trove.

Chris Gore covered the movie’s production in the October, 1993 issue of Film Threat. It was a well-researched piece written by a fan. More importantly, it was the only clutch of information devotees could get about the movie from inception to completion. Other scant bits of rumor and publicity could only be found at conventions. Even the actors got in on the junket-wheel, and this is when the official story (that of co-exec Bernd Eichinger’s determination to get the movie released) gets twisted.

If the million-dollar budget, the 24-day shooting schedule, and the 89-minute running time weren’t any indication of the movie’s predestined failure, it had to be the shocking lack of enthusiasm on the part of either Eichinger, Lee, or Corman in generating buzz for the film. It appeared nobody on the executive-line-level of the picture cared about getting the movie into theaters. If Eichinger cared, we would’ve had a released movie. If Corman cared, he wouldn’t have accepted a quick buy-out of his right to distribution (in his defense, Corman did run trailers for the film, but he might have been trying to hedge his bets either way). If Lee cared, he would’ve destroyed Eichinger in the press every opportunity he could get. It seems the only people who cared were the actors, the crew, and the fans – all below-the-line, all ultimately insignificant little cogs in the machinery.

These are the games Hollywood likes to play. A million-dollar budget is atrocious for a film like “Fantastic Four”, and the bartering and back-room deals to bury a film like this usually begin in pre-production. Scripts are leaked. Casting choices are bandied about, and bad word-of-mouth is enough to kill any production. Yet, this movie was given a strange chance. It was the little movie that could. It seemed that in post-production, people were sneaking around, finishing the opticals and scoring the music under a cloak of secrecy because they knew they were not going to get a shot at a release, so they forced Eichinger’s (and Marvel development exec Avi Arad’s) hand, and then the whole ugly mess came out.

Inexplicably (even after claims that the final prints were destroyed), bootlegs emerged almost immediately. Even now, you can find the movie on YouTube, and similar sites. In fact, the movie is so easily accessible, to call it a “bootleg” would be laughable. If there was a serious attempt to block access to this movie, there would’ve been lawsuits all around! The FBI gets involved when nude pictures of starlets float all over the internet, but nobody cares if an unauthorized version of a movie plays on popular web-sites? George Lucas would blush.

Eichinger and Arad were embarrassed and shown-up by a rag-tag group of near-amateurs churning out a movie in less than a month on a budget that couldn’t provide catering for most productions, and then threw the actors and crew under the bus (an idiom I detest) so that Eichinger could maintain his rights to the property and then get a bigger cut of money (which he did, in 2005) with an eventual mega-budget blockbuster, but that’s just my opinion.