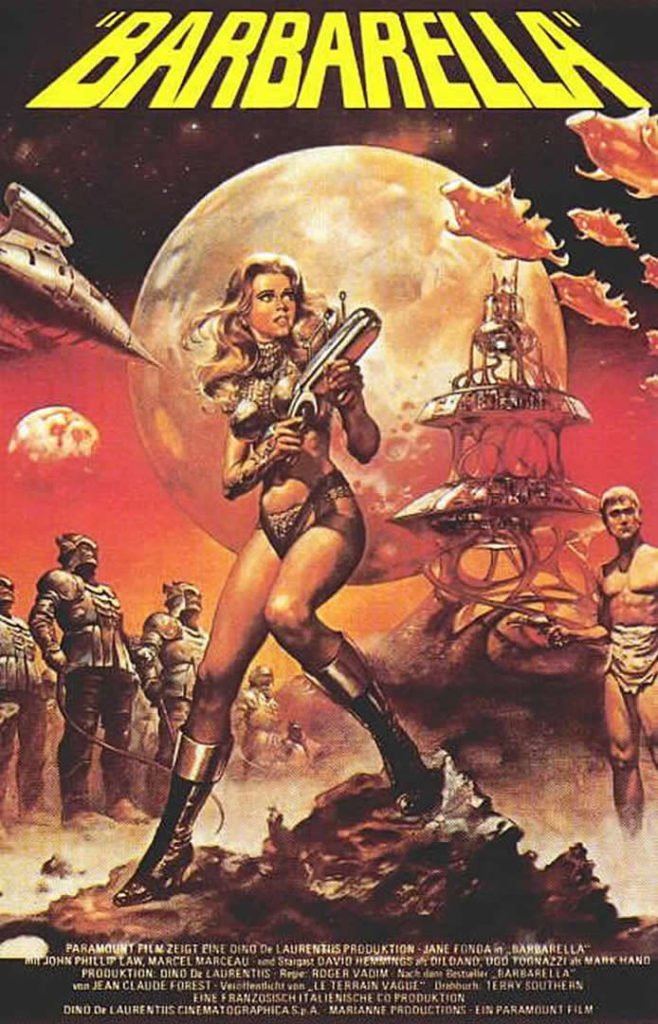 Kids from my generation know very little about the actress Jane Fonda from the time period in which Roger Vadim’s Barbarella was produced, except to say that she was involved in protesting the Vietnam War, or something to that effect. She was in 9 to 5 and On Golden Pond. If you get a codger in the room, he or she will invariably spit, “Hanoi Jane!” What the kids from my generation will most remember Miss Fonda for was her marriage to broadcasting mogul Ted Turner and The Jane Fonda Workout, an incredibly successful series of videos she produced for that burgeoning industry starting in 1981 with her workout book.

When we first see United Earth Space Agent Barbarella, she is stripping out of her leatherette bubble-wrapped spacesuit, floating about her small spaceship nude in a non-gravity environment as the credits float past her.  She is given an assignment by the President (Claude Dauphin) to take renegade scientist Durand Durand (Milo O’Shea) into custody for fear his Positronic Ray will be used for nefarious purposes.  Has a Positronic Ray ever been used any other way?  The movie is a whirling dervish of ’60s psychedelic effects, including oil plates, sparklers, and some fairly impressive animation and model work.  The plot recalls a much sexier version of Conrad’s Heart of Darkness with Barbarella’s leaps into dark tangents, and sexual encounters with eccentric characters, such as a beefy blind angel and a futuristic truant officer.

Barbarella is abducted by creepy twins (what twins aren’t creepy?) after she fails to translate their language with her “tongue box”, who then take her on a manta-ray driven sleigh ride to their dungeon, which is populated with pathological little girls and blood-thirsty dolls with razor-sharp teeth.  As strange as this seems, it only gets weirder.  She is rescued by the aforementioned truant officer, hairy Mark Hand (Ugo Tognazzi), who insists they must make love physically (instead of with pills and psychological profiles as Barbarella suggests is now the preferred method of sex) if she is to properly reward him.  In her ship, she probes the deep nether-regions of Tau Ceti and is rescued by a the hunky blind angel Pygar (John Phillip Law) after she is injured by falling rocks.  Pygar rescues Barbarella (yet again) from the Black Guards, strange creatures in service to the “Great Tyrant”, so she makes loves to him, thus giving him the will to fly.  He flies her to Sogo, the “City of Night.”  They are beset by attack vehicles that remind me of the Bespin Cloud Cars from The Empire Strikes Back.

Once inside the strange city of Sogo, Pygar and Barbarella are taken in by the “Concierge” to the Great Tyrant, who immediately imprisons the blind angel and sentences Barbarella to death (by bird-pecking).  She takes up with Dildano, leader of a resistance (hilarious David Hemming with his invisible keys, invisible walls, and ridiculous cape), where she becomes a lynchpin to their mission.  She is captured by Durand Durand, who forces her to submit to death by musical and sexual intercourse.  In short, he plays her like an organ, and attempts to screw her to death, but she breaks his instrument!

The movie is well-made and entertaining and visually dazzling.  If only comic book movies being made today had such wit!  This movie should be shown on a double bill with Flash Gordon (also produced by Dino De Laurentiis).  I don’t know what all of this means, but it must mean something.  If there isn’t some greater subtext in this movie, then it must’ve been made to be fun!  You don’t always have to have deep meaning in everything you do, however I do note several unusual choices.  For one, Barbarella is always in danger, and always has to be rescued by someone to whom she offers her body.  Second, as Danny Peary notes in his Guide for the Film Fanatic book, Barbarella always enjoys her sexual encounters.  This had to be keen for the Second Wave of Feminism, which started in 1961.  In Barbarella, sex seems to be her weapon and agency of choice.  Camille Paglia would be pleased.