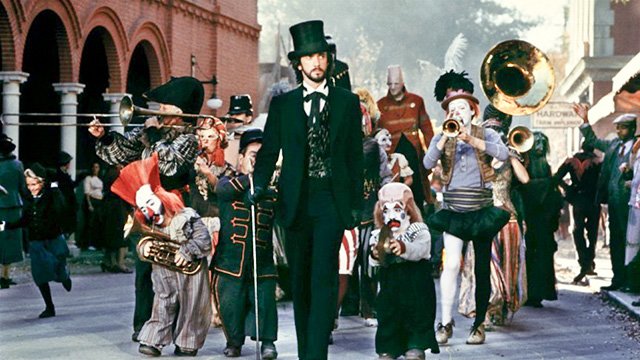 “I won’t always be younger than you.” 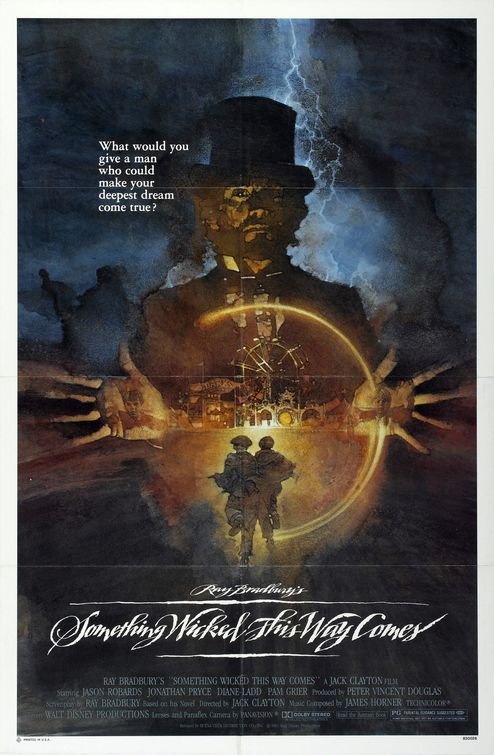 There comes a time in every child’s life when he or she realizes his parents are not gods, not super-heroes; sources of steady nurturing and strength, but flawed, weak old analogs, begging for better days. Young Will Halloway sees this failing in his old dad (a heartbreaking Jason Robards) on the day Mr. Dark’s Pandemonium Carnival arrives in his small Illinois town. Will and his friend, Jim Nightshade, snoop and investigate. Easily spooked by an oddly porcelain Pam Grier’s tarantula, they run off. The next day, the carnival opens. Good-natured, one-legged, one-armed Ed takes a trip through the wacky Mirror Maze, where he sees a reflection of himself with missing appendages intact. Elderly and bitter Miss Foley sees a beautiful world in the Maze only she can imagine. Lonely men are seduced by gorgeous belly dancers, and given money and cigars.

Obviously, we have a carnival that promises and delivers on thrills and excitement, but of course there is a price to be paid for all that is given. Will and Jim are busted for trespassing in an out-of-order carousel, and they are confronted by Mr. Dark (freaky Jonathan Pryce). The boys stow away until after sunset so they can see what goes on here when everybody leaves. They see one of the townies, barber Mr. Cooger riding the carousel backwards, and being transformed into a child. His shop is closed down due to “illness.” The child takes up residence with Miss Foley, who believes him to be her nephew. Jim returns home to find his mother dancing with a man who is not his father. Will discovers Jim’s father rescued him from drowning during a picnic by a lake several years before. Robards regrets not having saved the boy himself, which stirs up feelings of inadequacy. Miss Foley looks into a mirror and sees a beautiful young woman staring back at her. She becomes this woman, but then is almost immediately struck blind.

Meanwhile a storm is brewing. Will and Jim smell lightning in the air, and a plague of spiders falls on Jim’s house. This is a truly frightening scene, even by today’s standards. Mr. Dark is aware of what the boys know about his crazy carnival, so he sets about looking for them. Dark confronts Robards (who hides the boys) and sees right through him. Robards holds his own, and begins to realize Dark’s awesome powers. The carnival seems to be consuming the town, devouring the hearts of it’s most promising people. In a way, the town was the prison of these people’s failures, and freedom from that prison equals death. Robards joins Will and Jim in their investigation of the carnival and it’s evil proprietor. Pryce’s Dark (as the Devil’s own stand-in) attempts to seduce the boys (particularly fatherless Jim) to join him in the carnival. Robards must fight Dark for possession of his son’s soul. 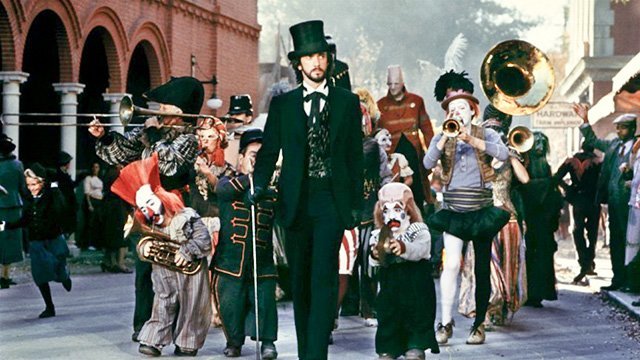 The film is truly marvelous to behold.  Ray Bradbury adapts his own short story (the story and an early spec-script becoming the basis for a full-length novel), “Black Ferns”, and Jack Clayton imbues his film with horrifying visuals that provide a grotesque counterpoint to initial scenes of small town beauty and Bradbury’s requisite hunger for nostalgia.  You can almost feel the dried leaves of October crackle under your feet.  A lot of the action is strangely intense for a film produced by Disney.  James Horner’s score is delightful.  Owing to problems in editing, the ending feels rushed in comparison to the build-up of everything that’s come before.  Richly drawn characters disappear three-quarters of the way through the film, and Pam Grier’s powers are never adequately explained.  These are minor flaws.  Something Wicked This Way Comes is a gem of a movie.

By the pricking of my thumbs,
Something wicked this way comes.
Open, locks,
Whoever knocks.

One thought on “Vintage Cable Box: Something Wicked This Way Comes”