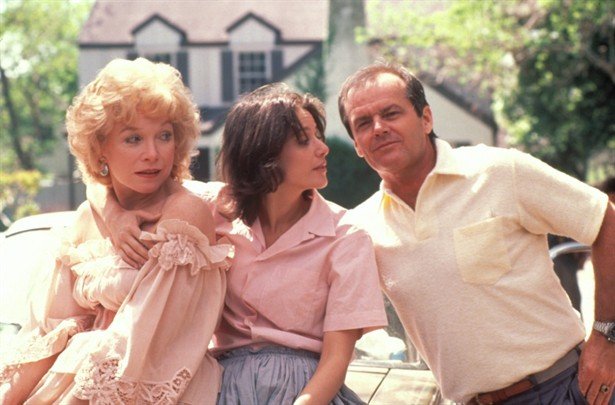 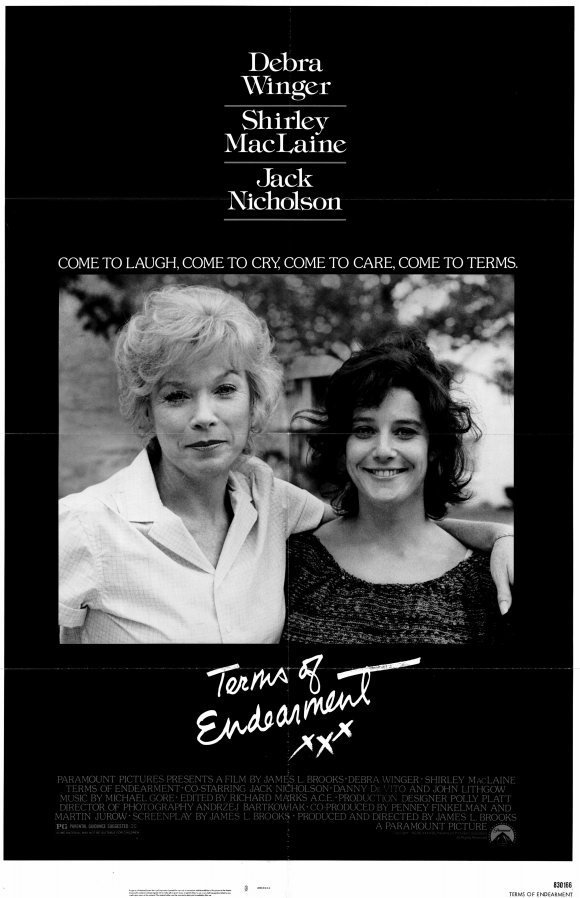 Aurora is constantly worried about her baby, Emma. When Emma doesn’t cry (in the pre-credit sequence), Aurora charges in and starts shaking her. Emma starts crying. Relieved, Aurora mutters, “that’s better” and then leaves the room. As long as Emma is crying, Aurora will know she is okay. Years after my daughter was born, I would go in and check on her. Okay, so I still do it. I just like to know that she’s breathing. That’s what parents do. We worry constantly, and if there’s only one element of Terms of Endearment that remains beautifully true, it is Shirley MacLaine’s awe-inspiring performance as Aurora Greenway. MacLaine is truly a mother in this movie. She is a mother in real life. In fact, it was her relationship with her own daughter that inspired friend William Peter Blatty to write The Exorcist.

The movie starts with the death of Aurora’s husband and her newfound single status, raising Emma to young adulthood.  Emma grows up to inhabit her mother’s values even if she has less-than-stunning taste in men.  She marries ne’er–do–well teacher Flap Horton (an infuriating Jeff Daniels), who knocks her up with three kids (while her best friend lives a happy and fulfilling life in the big city), keeping her trapped in a marriage she realizes is running on fumes at this point.  They have no money, and Aurora has to loan them money to survive, even though he has a full professor’s position at an Iowa college.  Aurora’s dislike for Flap extends to her not even attending Emma’s wedding, and then she completely flips out at the dinner table when Emma tells her she’s pregnant.  She protests that she’s not ready to be a grandmother, and to prove it, she courts next-door neighbor, astronaut and womanizer Garrett Breedlove (Jack Nicholson).

While Aurora is trying to enjoy her life, she suffers in silence at her presumed betrayal of her husband, and Garrett bristles at the emotional responsibility of maintaining a monogamous relationship.  Emma conducts her own affair with a timid banker (John Lithgow) when she discovers Flap has been letting it flap around a little too much.  It seems he really enjoys his students, and not in that good, educational, inspiring way.  Asshole!  Eveything Emma has done for him!  Every compromise!  Every child!  This is what she gets?  On top of this, she gets fucking cancer!  I know, right?  This is fucked up!  What was supposed to be a routine flu shot turns into fucking cancer because the doctor notices some suspicious lumps.  He orders a biopsy, and that’s it – she’s got fucking cancer.  I remember this whole bit making me incredibly angry and sad watching it for the first time on cable television.  I knew I was in for an emotional rollercoaster ride, but I didn’t know we would jump the tracks and wind up in a ditch.

Emma puts all her ducks in a row.  She travels to New York City with her best friend, Patti, lives it up, meets new people.  She tries to bond with her children, sweet Teddy and incorrigible bastard Tommy.  She tries to make peace with Flap, but I think (in Emma’s defense) she always knew that Flap was a hopeless idiot.  A devoted (if not faithful) husband and father he may be, Aurora correctly sums him up as being careless and inconsiderate.  He agrees with her assessment, but he also holds her to task for never welcoming him into the family.  Emma returns home to die.  She spends her last days in the hospital.  One particular scene that always causes me to lose it is Aurora pleading, begging, and ultimately shouting at a nurse to give her daughter a shot for her pain (which she almost seems to preternaturally feel).  It is chilling and heartbreaking.  When Emma finally dies, Aurora is devastated and she clutches at Flap, almost unable to surrender to an embrace with a man she detests, but she has no choice now, as Flap is and always will be family.  That’s what we learn from Terms of Endearment.  We may hate them, and they may irritate the Hell out of us, but they are family.

This is such a damned good piece of filmmaking; pandering and manipulative, but also hysterically funny, with performances so good I almost forget the actors and actresses involved.  While I have stated this is MacLaine’s absolute showcase (for which she won a well-deserved Academy Award), ancillary performances from Debra Winger (as Emma), Daniels, Nicholson, Lithgow, and Danny DeVito (as one of Aurora’s early prospective suitors) are top-notch.  Nicholson is interesting to watch in this film.  As part of The Movie Channel’s premiere of this movie in 1984, there was also a Jack Nicholson retrospective which included Easy Rider, Carnal Knowledge, The Postman Always Rings Twice, and Chinatown.  Terms of Endearment is the odd-movie-out for him; a sentimental, sometimes cloying family melodrama with colorful bursts of humor, Nicholson seems out of place.  Emma’s funeral scene at the end perfectly illustrates this point as he hangs back while the immediate family mourns, uncomfortably rocking back and forth with his hands in his pockets. 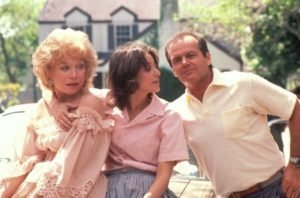 James L. Brooks directs the movie with an incredibly sure hand, a love for offbeat humor and romance, but with such sophistication, it’s easy to forget he got his start in 60s and 70s sitcoms, such as The Mary Tyler Moore Show, That Girl, and Room 222.  He would follow up Terms of Endearment with Broadcast News, and Nicholson’s own showcase, As Good As It Gets.  Terms of Endearment would inadvertently kick-start a subgenre of movies in ’80s and ’90s known as the “chick-flick”.  Movies such as Beaches, Steel Magnolias, Mystic Pizza, and Fried Green Tomatoes were directly influenced by this movie.  Usually the formula goes that you have a clutch of female friends, who like to dance and share secrets about love and romance, and then one of them dies of fucking cancer.  Terms of Endearment is a movie like The Big Chill, wherein I have a difficult time understanding the character’s motivation primarily because of a perceived age or generation gap, but Terms of Endearment is still a stunning example of modern melodrama.