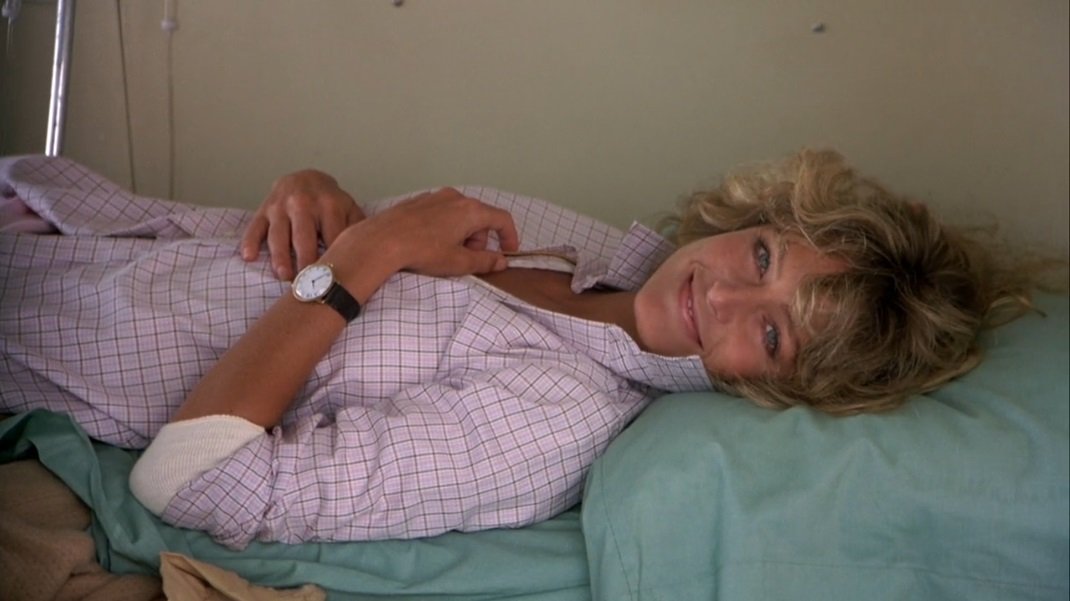 “Officer, I sincerely hope you’re not a Catholic.” 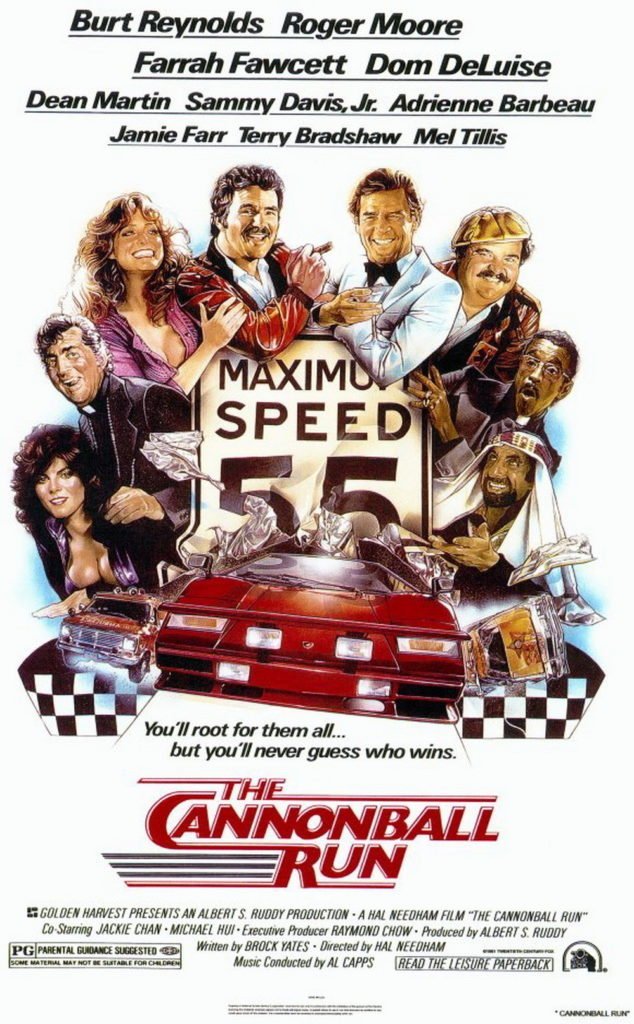 Early ’80s cable television was a dumping ground of racing movies; most of them starring Burt Reynolds and directed by the legendary stuntman-turned-director Hal Needham. You had your Hooper, your Stroker Ace, your Six Pack, your Smokey cycle, and you had The Cannonball Run (which spawned two sequels), which plays more as an excuse to hang out with your friends and make a fun movie than an effort to produce a serious racing movie. We’re not even fifteen minutes in and Burt (with buddy Dom De Luise) are working on hot cars, flying single-engine planes, and riding speed-boats as they try to figure out what vehicle to race in the famous “Cannonball Trophy Dash” from Connecticut to California. Burt gets the idea to use an ambulance after sustaining injuries in the resulting speed-boat crash, but first they need a patient and a real doctor, so they abduct (what?) Farrah Fawcett and a junkie doctor (hilarious Jack “I just gave her a little prick” Elam), so they can drive at high speeds.

The film is a veritable Who’s Who of late 70s/early 80s celebrities, both minor (Terry Bradshaw, Rick Aviles, Jamie Farr) and major (Dean “Father Putz” Martin, Sammy “The Chocolate Monk” Davis Jr., Roger “The Fly Who Bugged Me” Moore), as well as a few up-and-coming stars (Adrienne Barbeau, Jackie Chan).  Farr, as an Arabian Sheik, drives a Silver Shadow Rolls.  Chan drives a state-of-the-art Subaru GL with all kinds of gadgetry.  Roger Moore spoofs his “James Bond” persona as Seymour Goldfarb, a nice Jewish boy who thinks he’s Roger Moore, and drives a gorgeous Aston Martin.  Dean and Sammy are dressed as priests, driving a red Ferrari.  Buxom Barbeau and Tara Buckman drive a Lamborghini (the ultimate winners, but it doesn’t matter) and get out of speeding tickets by showing off their cleavage, until they come upon a similarly stacked State Trooper (Valerie Perrine).

We, of course, have a bad guy, but he’s not really a bad guy.  George Furth (a dependable character actor mainly known for ’70s television) is Arthur J. Foyt (a clever play on racer A.J. Foyt), a crusader (or what you’d call social justice warrior), looking to shut down this silly “Cannonball” competition.  The whole idea seems insanely dangerous, but the lure is a big money cash prize, so who can blame some of your more reckless racing enthusiasts for giving it a shot.  The only real problem in the narrative is that the movie takes too long to get going.  It’s like one of those old Plymouths you had to warm up in the garage for twenty minutes, except in this case it’s more like 35 minutes before we start up the engines.  This is understandable given the many characters and their vignettes, and that the screenplay (screenplay?) plays as a series of episodes rather than a cohesive narrative, but that’s okay.  This is such a fun movie – and never boring – that I don’t care.  It’s obvious everybody’s having a great time.  Burt Reynolds barely represses the urge to laugh in every scene with Dom De Luise.  Dean Martin is obviously drunk throughout the movie, and Sammy’s not that far behind. 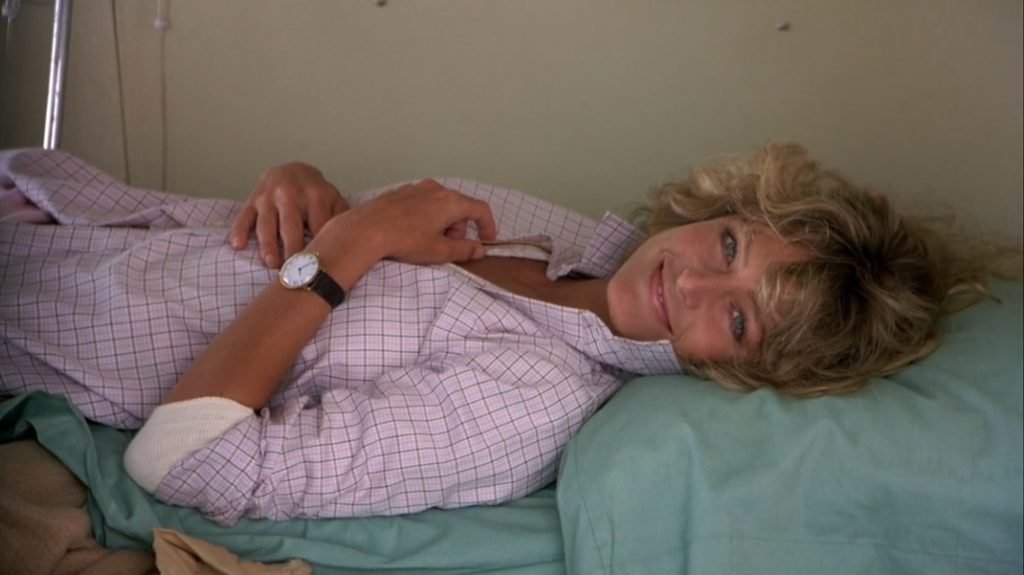 I’m not a fan of NASCAR, or any kind of professional racing (though I have good friends who are).  I don’t get it the same way I don’t get hockey.  I’m a baseball guy.  I tend to agree with David Cronenberg in that the ultimate “man-machine interface” is the man or woman who gets into his or her car in the morning and drives to work without thinking about it.  Plus, these competitions seem to be a serious waste of gasoline (also I suspect a good portion of the audience is there to see horrific crashes), but that’s none of my business.  I do, however, enjoy this movie quite a bit, mainly because it doesn’t take itself seriously.  There’s a brief shot I always remember when I think about The Cannonball Run.  Dean and Sammy pull over the ambulance to let the air out of the tires under the guise of offering a “blessing”.  They slide the door open and see a drugged Farrah smiling back at them.  She was truly beautiful.  Critics, at the time, steeped in Scorsese and Coppola-isms, were not appreciative.  A film snob myself, I don’t necessarily believe all movies should be serious masterpieces of style and form.  In fact, I think we should have an even (and wide) distribution of movies that stimulate our minds, and movies that go for the big belly-laugh.  Nothing wrong with that.