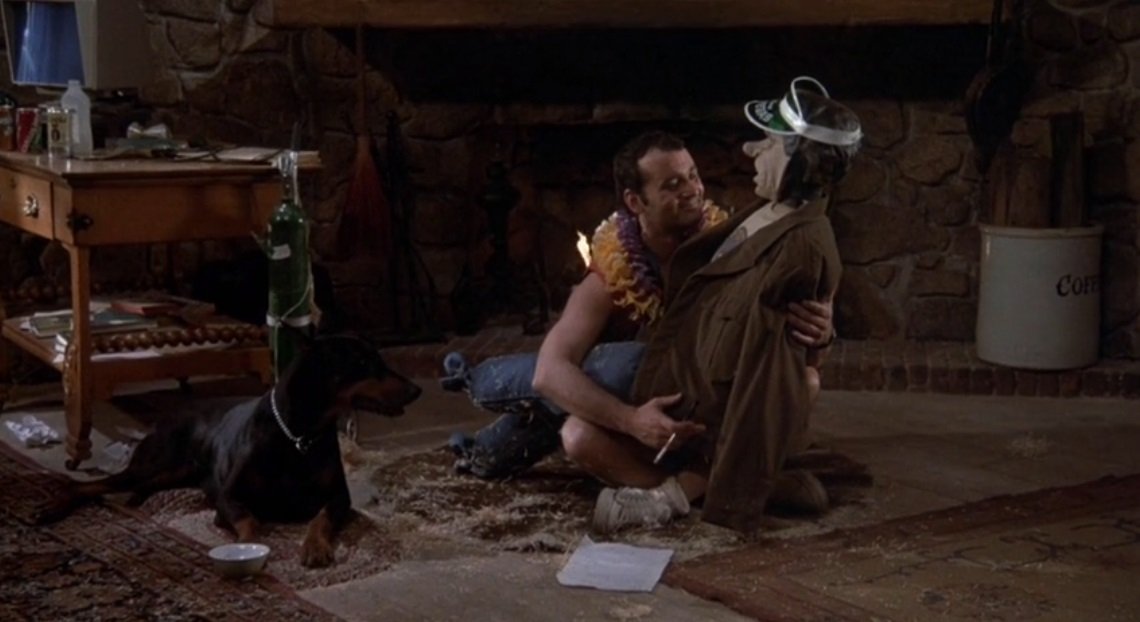 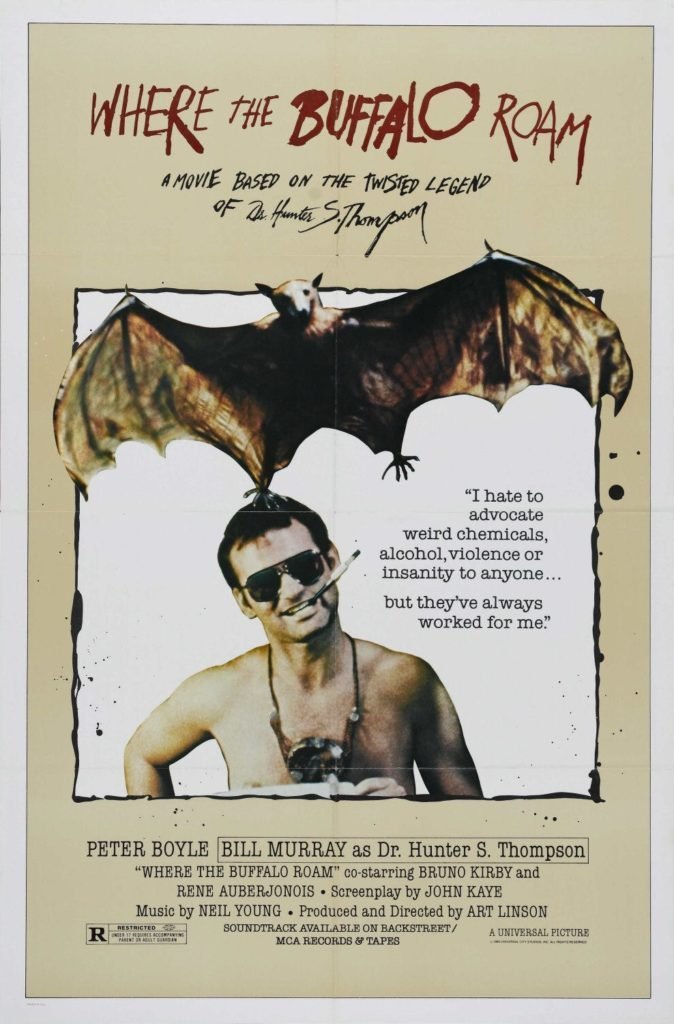 “He was … known for his lifelong use of alcohol and illegal drugs, his love of firearms, and his iconoclastic contempt for authoritarianism. He remarked: ‘I hate to advocate drugs, alcohol, violence, or insanity to anyone, but they’ve always worked for me.'”

His memories exist as a wild anecdote, only partially rendered impotent by the gross complications of a film director who has lost his personal sense of humor, and instead relented and choked from insatiable gasps of Bill Murray’s star power. He lives in a swanky cabin in Colorado. His fax machine belches, demands tasty portions of words, with which he is not ready to part. Instead he shoots the infernal machine, and sicks his Doberman on the tasty testicles of his Nixon effigy. He looks at a picture of his beloved hippy attorney, Carl Lazlo (Peter Boyle) and remembers those times, some ten years back in San Francisco. Lazlo is an idealist. He defends the weak. Helps the helpless! He’s God’s own prototype! To weird to live. To rare to die. I know. I stole those words directly from the real Thompson, but I can’t help it. The man was such a brilliant fuck-face, it’s hard to imagine anyone (even Master Johnny Depp) portraying him in any meaningful way.

Lazlo spends a lot of his time defending young idiots on marijuana possession counts.  I understand his reasoning.  These are victimless crimes, but in trendy San Francisco, end-of-the-decade, with colleagues seducing him to the dark side; rich clients and cushy digs, Lazlo doesn’t care.  In these all-important character scenes, we become convinced we’re watching the story of Dr. Hunter S. Thompson’s lawyer (which is probably interesting enough to work on it’s own) instead of a story about the celebrated icon.  Lazlo is demoralized watching his clients sentenced to hard time in prison for what would amount to (in my view) petty misdemeanors, but such are the breaks in the world of the old and powerful.  He flips out when a particularly young client gets five years in jail for possession of one joint.  He’s held in contempt, while Thompson sits on a deadline and makes his editor (Bruno Kirby) pray for Lazlo’s swift release (and also for all the people of the world).

We move forward a few years as Thompson is covering the Super Bowl.  I don’t think he has any interest in covering sports, but he runs up a huge expense account at the hotel where he is staying (including Crab Louie and sixteen grapefruit).  He trashes the hotel room, dresses the staff in football equipment. and causes a ton of havoc on his floor.  The next morning, Lazlo (wearing a Nixon mask) catches up with him.  He stopped being an attorney full-time, and now cavorts with the younger set.  Thomspon ditches his assignment to become Lazlo’s traveling companion.  I wonder if, in these later scenes, Lazlo isn’t simply a figment of Thompson’s potent and overactive imagination.  Lazlo tells him he’s been “reborn”, running guns for paramilitary types out of Mexico.  Whatever floats your boat, Lazlo.  He wants Thompson to write a story about the “struggle.”  The movie is a push-pull of idealism and gluttony that never kicks into gear, mostly because I think those so-called revolutionaries of the time could never get their shit together in a worthwhile way.

The movie is a mess, editorially, with no flow except for episodic moments in which Murray crosses paths with Boyle’s Lazlo.  For his part, Boyle is extraordinary, but he acts in a vacuum.  Murray’s Thompson is a baroque caricature.  While obviously devoted to playing this part (with some guidance from the real Thompson), he comes over as an inebriated middle-child with autism, hiding a feverish addiction to alcohol and other various substances.  Despite good production locales and photography, Where the Buffalo Roam does no favors for the time period, and the social and the political unrest it attempts to show us.  I often wonder if this is the beginning or the end of self-destructive behavior, as Thompson’s exploits become bigger and more dangerous with each scene change.

Later releases of the movie remove key bits of music, due to rights issues, and replace them with “sound-alike” tracks, which make the whole thing even more unbearable to watch.  In retrospect, I had the same issues watching Terry Gilliam’s similar Fear and Loathing in Las Vegas, however that movie improves on subsequent viewings, but Dr. Hunter S. Thompson’s legacy has been tarnished by his God-given desire to numb himself in any way he could.  In a way, Thompson was his own prototype.  Too rare to live, but always ready to die.