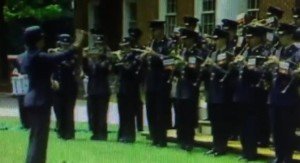 It’s beautiful, isn’t it? The end of the world as we know it. Against the grating strains of “Nearer My God To Thee”, the Army of Eternal Golden Light (or a bunch of second-hand musicians – take your pick) stand at attention in front of an enormous mansion (I’m guessing Ted Turner’s summer home) waiting for the crash of the first missile, or the last drop of water to be drunk, or the last gallon of oil to be burned, or whatever we might label “Doomsday”.

Back to reality. I can’t help but be a little creeped out. Not at the video. Not at the composition. The motivation behind such a production is baffling. Are we trying to put people at ease with a hymn? As flaming bodies fall from the sky, and we look out our windows, gather our children, and head to the basement with a stockpile of canned food and shotguns, do we feel better knowing Ted Turner has our collective back?

How can we be sure the end is really upon is? Considering scenes of apparent armageddon will be caught on video, and that video comes streaming into our homes by way of computer and television (that is to say assuming electrical power and internet access is still available), will newscasters continue to do their jobs if the notion of a paycheck goes straight out the window?

Apocalyptic imagery is still fresh in our minds. I still go back to September 11th and see the images on the television. I look at the pictures. I hear those horrible sounds, those phone calls. I remember the blackout of 2003, and the incredible fear that engulfed me for roughly an hour. Thirty-four years ago (from our comforting perspective of hindsight), Ted Turner didn’t know a damned thing about doomsday. He speculated. He conjectured in a kind of “Dr. Strangelove” way. He had no idea of the madness we, as a species, would eventually endure.

Yes, we can nervously laugh at this tape as we look at it now, but I have to wonder – hundreds of channels, the 24-hour news cycle – how many “Doomsday” tapes are being stored in television archives just waiting, just itching to be played?