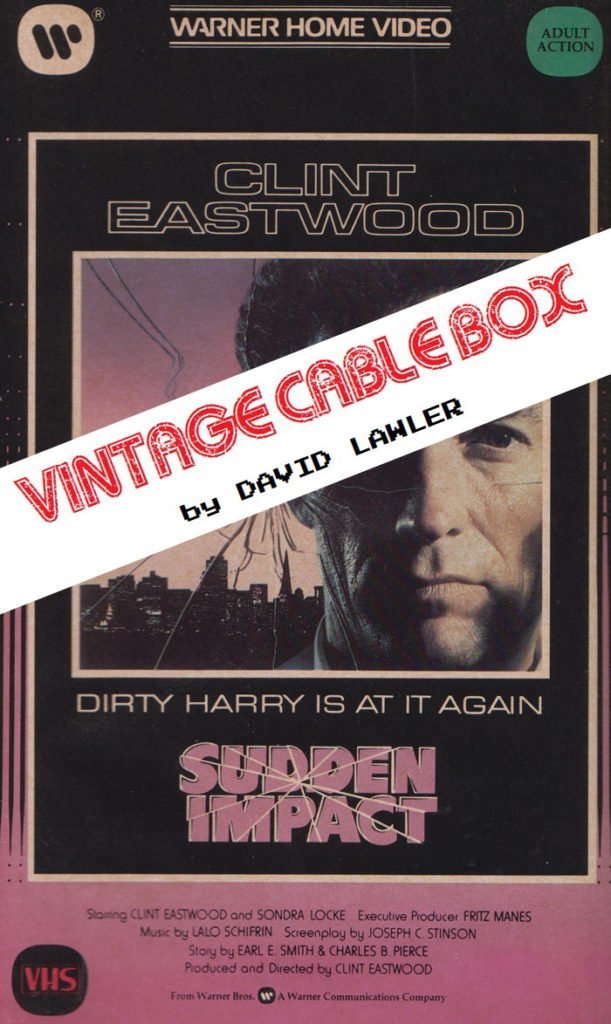 Clint Eastwood returns as “Dirty” Harry Callahan in this, the fourth installment of the popular crime/drama franchise. While negotiating punks and malcontents, he stumbles upon a series of vigilante misadventures all involving men shot once in the groin and once in the head. He very quickly figures out these murders are being perpetrated by one person or group. After causing collateral damage (this happens in every movie) during a botched diner hold-up, Harry is put on vacation by his superiors so he takes up residence in idyllic coastal town, Santa Cruz. Meanwhile, the vigilante murders are occurring with greater dispatch in this town. It seems trouble follows Harry wherever he goes.

We’re introduced to the hauntingly beautiful Sondra Locke, a successful artist who has also moved into the town under the pretense of restoring a carousel for the local amusement park, but what she really wants is revenge for her sister and herself. All of the murdered men were involved in a brutal gangrape of Locke and her sibling, which left her sister catatonic and unresponsive. Locke isn’t finished marking names off her list, so she visits the remainder of the men (and their lesbian cohort, played with appropriate sleaze by Audrie Neenan) one by one. Her flashback to the rape is one of the most terrifying and seemingly accurate depictions I’ve ever seen.

Though officially “on vacation,” Harry conducts his own investigation into the killings, runs afoul of Police Chief Pat Hingle (who has a personal stake-by-proxy of his traumatized son), and makes time with a surprisingly soliticous Locke.  The “foreplay” of their conversation telegraphs a mutual understanding of the failings of law enforcement and the hypocrisy of the justice system.  As Locke airs her grievances, Harry becomes more interested in her.  It’s a fascinating scene.  Eventually Harry puts the pieces together.  When the other rapists catch on to Locke’s activities (rather than turning tail and running off into the night), they abduct her.  Harry rescues her (in a famous “resurrection” bit evocative of his old westerns), and then covers for her.

Sudden Impact is a fun and atypical Dirty Harry movie that places our sympathies with the “bad guy” (Locke) and transforms her into a reluctant hero because we relate to her and her sister’s  victimization.  Clint Eastwood directs this installment with remarkable assurance.  He had already established himself as an excellent filmmaker, and had a hand in directing sequences from Magnum Force after a falling out with original director, Ted Post.  He’s fascinated and invested in Locke’s character, and uses effective close-ups of her wounded eyes.  According to Locke’s memoir, the film originated as a separate script with no connection to Dirty Harry.  Eastwood would return to the role in 1988 with the inferior follow-up, The Dead Pool.

Sourced from both the original 1984 Warner Bros “clamshell” VHS release and the Dirty Harry Ultimate Collector’s Edition Blu-Ray box set. The movie continued to receive different format releases, and is available in Beta, DVD, Laserdisc (using the same art design as the clamshell release) and Blu Ray formats. As with most (if not all) WEA VIDEO CANADA clamshell releases of Warner properties, the paper is flimsier than U.S.A. releases. The paper also has wax stains, and the label on the tape appears to have been printed for Beta tape (as with my previous review of Swing Shift). “Two killers are at large. One of them is Dirty Harry.” The essay on the back of the box reminds us of the previous three movies: Dirty Harry (1971), Magnum Force (1973), and The Enforcer (1976). Clint himself gives us a blurb: “People are a little edgy about the rights of criminals taking precedence over the rights of victims,” Eastwood says, “I think the public is interested in justice, and that’s what Harry stands for. He’s unique because he stood for the same principles from the beginning, when it wasn’t terribly fashionable.”

Be sure to catch the latest Extreme Cinema: Action and Exploitation Movies with Andrew La Ganke and David Lawler podcast, in which we discuss the Dirty Harry franchise in honor of Clint Eastwood’s birthday! You can also find the original, unaltered episode at BlissVille.

Special thanks to Bethany Robertson Heinlen for the Blu-Ray box set.

As to the inevitable comparisons between the original VHS tape and the Blu-Ray, the differences are staggering.  This is a discreetly clean-up transfer from original negatives that preserves the clarity of cinematographer Bruce Surtees’ compositions without the need to “improve” the visual quality by artificially brightening the image.  The Panavision process is staggering in four of the five Dirty Harry movies on the set.  As for the VHS videotape – other than myself and curious cinephiles, I don’t see any reason to watch the movie in standard (read: low) resolution, panned-and-scanned to 4:3 for televisions.  Here’s a good overview of the Blu-Ray box set.