“John, the friendly orderly, will make her happy because he’s the only one who can. And when John feels she has reached the moment of her greatest happiness, he will strike her across the bridge of the nose, breaking it explosively and sending bone fragments into her brain. It’ll be quick. And he’ll be looking at her face at the time. He will know her power. And when he dies, which I hope is very soon, perhaps he can take that power with him… into the other world.” 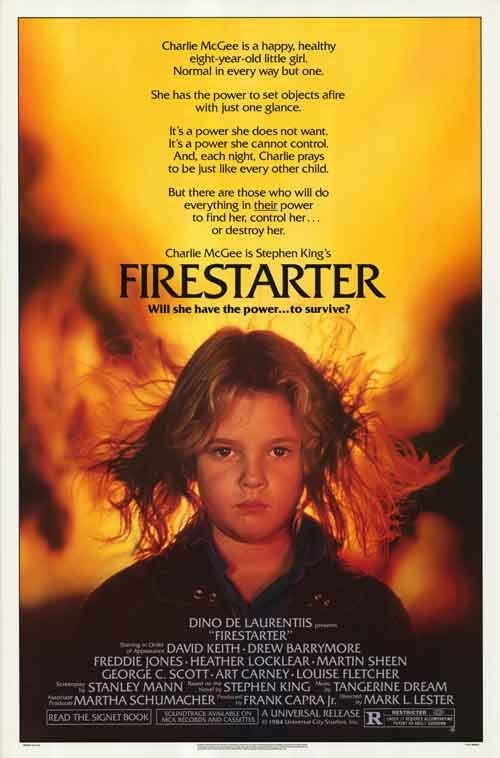 We pick up in mid-story. David Keith and daughter Drew Barrymore are on the run from nefarious government agents working under the auspices of “The Shop”, a kind of CIA Science Branch that specializes in chemical warfare and drug experimentation. Some ten to fifteeen years before, a drug called Lot 6 is tested in a double-blind study. Andy and soon-to-be wife Vicki (Heather Locklear) are participants in the study. While some are not affected (by means of placebo), and some have extremely violent reactions (one poor bastard gouges his own eyes out), Andy and Vicki begin communicating telepathically.

They marry and have a child, Charlie, with pyrokinetic powers, but members of “The Shop” (short for the Department of Scientific Intelligence) have been watching and studying the child’s growth, subjecting them to harrassment. Eventually they murder Vicki and attempt to abduct Charlie, but Andy has the power to push people; that is, he can manipulate them to do what he wishes, but his power comes at a cost. He suffers hemorrhages that will eventually kill him.

For a year, Charlie and Andy stow away in motels and keep running from “Shop” agents, who want to exploit Charlie’s power, and perhaps assemble a race of firestarters for use in future war campaigns. The scientist (Freddie Jones) involved in the original Lot 6 tests discourages any further study of her, while “Shop” head Captain Hollister (a wicked Martin Sheen) and psychopathic assassin Rainbird (George C. Scott) want to kill Andy and train Charlie to control her powers, where her father has always discouraged using them. 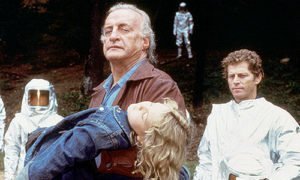 They hitch a ride with kindly farmer Art Carney, who takes them back home to meet his wife (Louise Fletcher), but “The Shop” is right behind them. Carney does his best to fend off the enemy agents, and Charlie and Andy escape. They hide out in an old lakehouse, but are then quickly captured by Rainbird. Once imprisoned in a “Shop” facility, they are separated. Testing begins on Andy, while Rainbird ingratiates himself to Charlie, and pretends to be her best friend.

Under the tutilege of Hollister and Rainbird, Charlie’s powers increase. She is able to selectively set fires with her mind. Andy has not been taking the medication he has been prescribed to dampen his own telekinetic activity. He pushes Hollister into reuniting him with his daughter, but Rainbird has other ideas (he wants to destroy her and, in my view, gain her power – “the power of the gods”), and the movie ends with an incredible and violent showcase of fire effects (a variation on the climax in Carrie) in which Charlie destroys the “Shop” facilities.

Stanley Mann’s screenplay is slavishly faithful to the Stephen King book and Mark Lester’s direction is spot-on.  Tangerine Dream’s memorable score is one of the best I’ve ever heard.  Keith and Barrymore are incredibly believable as a desperate father and his precocious and dangerous daughter, and Scott and Sheen make excellent, mustache-twirling villains.  Barrymore was such a gifted young actress in this movie that King wrote a part specifically for her in 1985’s Cat’s Eye.  Reading King’s books, I’ve noted his distrust of authority and government (The Stand and Under the Dome spring to mind) as well as his fascination with children (Carrie, The Shining).  Several movie adaptations of King stories played on cable at this time, such as Cujo, The Dead Zone, and Christine.

On a personal note, enjoying this movie as a kid (as I’ve said before, I love stories about kids with insane, god-like powers), I never thought I’d have a daughter of my own.  Barrymore, in this movie, reminds me so much of my daughter; not that she has the ability to summon fire, but the sweetness, the innocence of childhood imparted.  Firestarter is one of the very few movies out there to stress and comment upon the importance of fathers and their daughters, and for that reason, this movie earns very high marks from me, and it is one of my favorite adaptations of Stephen King.

Anyone who listens to a child’s crying with understanding will know that psychic forces, terrible forces, sleep within it, different from anything commonly assumed: profound rage and pain and lust for destruction.

Thanks for reading Vintage Cable Box’s Halloween 2016 Horror Movie Coverage.  I had a lot of fun watching these movies and I hope you had fun reading!