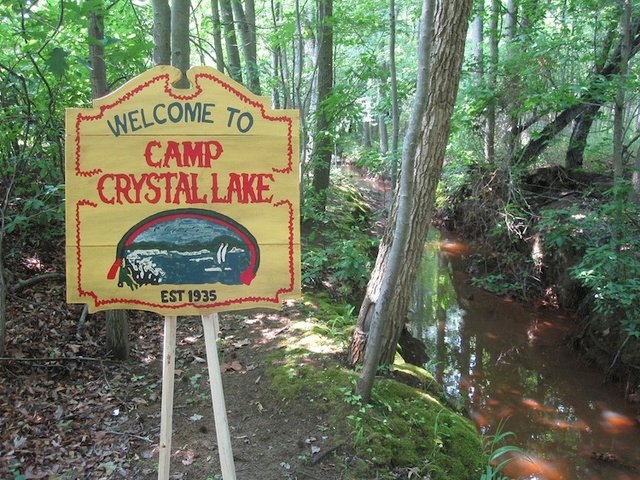 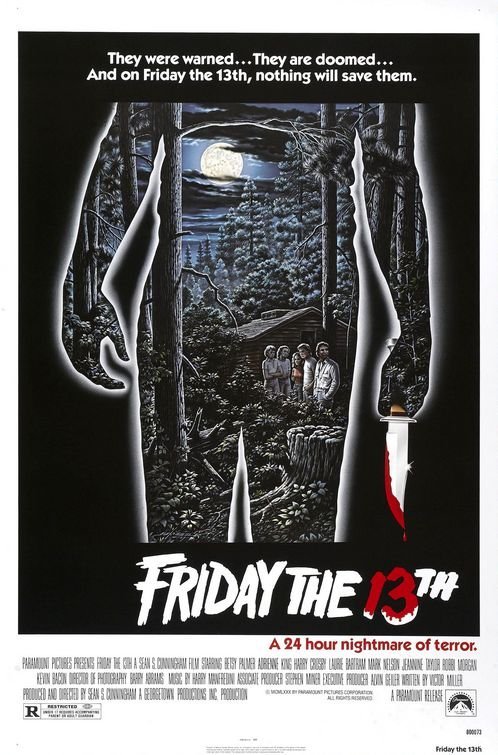 The slasher film was by no means a new idea when Friday the 13th opened to theaters in 1980, nor even Halloween two years previous.  A quick trip to the Wikipedia unearths unusual obscurities like Maurice Tourneur’s The Lunatics from 1912 (which I am stunned to remember watching at some point), which may have inspired the passing of the Hays Code (I would argue that, as the Hays Code was primarily an instrument of sexual censorship).  Thirteen Women from 1932 is more likely the progenitor of the modern-day slasher flick, because of the revenge-obsessed narrative.  The usual pattern of these stories involves an unpopular character, ridiculed, perhaps killed (or assumed dead) who has emerged to exact bloody vengeance on all those who wronged him or her.  This is the impetus of the very popular Friday the 13th franchise.

This is Camp Crystal Lake, a few years back.  The moon is out, and crickets chirp in the woods.  We have a couple of camp counselors getting sexy upstairs, and then we see that famous POV shot.  Young Jason Voorhees (presumably) spies on them, and then murders them.  Henry Manfredini’s iconic score borrows heavily from Bernard Hermann’s idea to use stinging strings to emphasize the acts of violence committed to film, as in Hitchcock’s Citizen Kane of slasher movies, Psycho.

Counselors assemble to repopulate the once-abandoned Crystal Lake.  There are some classic bits in here, as when one of the counselors goes into the town diner to ask for directions to the camp.  Everybody in the place stares at her like they’re all about to tell the story of “Large Marge.”  She hitches a ride to the camp, and the driver tells her about the two kids murdered in 1958, the drowning boy in 1957, and all the fires that have plagued Crystal Lake.  The driver urges her to quit and leave, but she can’t. She’s shaping young minds, damnit!  While her devotion to her work is admirable, her colleagues have other ideas: namely hanky-panky, and this is where we get more of the formula of this sub-genre.  The innocent, or thoughtful characters, usually virginal girls, are spared, while the libidinous of the group die horribly.

For the purposes of the first movie in the franchise, the identity of the killer is kept secret until the end, but we know ultimately that either Jason (or his restless and super-human spirit) are responsible for the subsequent killings.  Adrienne King, the remaining victim, discovers that Jason’s mother, has been avenging herself upon this new batch of counselors in her dead son’s stead.  It seems she was driven mad by his drowning death (as any mother would be) and took to killing as her primary source of communication.  This explains why (from her point of view), she was able to easily dispatch so many unsuspecting and trusting idiots.  As in Psycho (at least for this first entry) Jason exists only as a memory, like Norman’s mother.  After she loses her head (literally!), we’re treated to a De Palma-style leap from a watery grave and King waking from a horrifying nightmare. 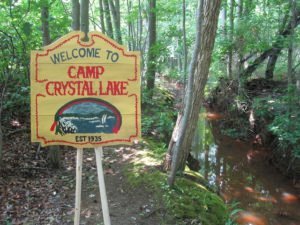 Sean Cunningham (working from soap-opera scribe Victor Miller’s script) crafts a good old fashioned camp-fire story in very economical fashion.  Primarily conceived as a “tax shelter production”, Friday the 13th was shot in 1979 on a budget of about a half a million dollars, and proceeded to make $60,000,000; an enormous box office hit for the time.  While Halloween undoubtedly influenced this film, I believe Friday the 13th to be the most influential horror film of all time.  In the 80s, theaters were blitzed with slasher movies and sex comedies.  Movie theaters were like libraries; the descriptions of so many different kinds of movies were printed in newspapers, and movie lovers could see any type of film they wanted to see.  This was the beginning of the golden age of slasher movies.

Welcome to Vintage Cable Box’s Halloween 2016 Horror Movie Coverage!  Next time, I watch and dissect the first sequel in a big franchise; Friday the 13th Part 2 from 1981.