“Mr. Bond is indeed of a very rare breed… soon to be made extinct.” 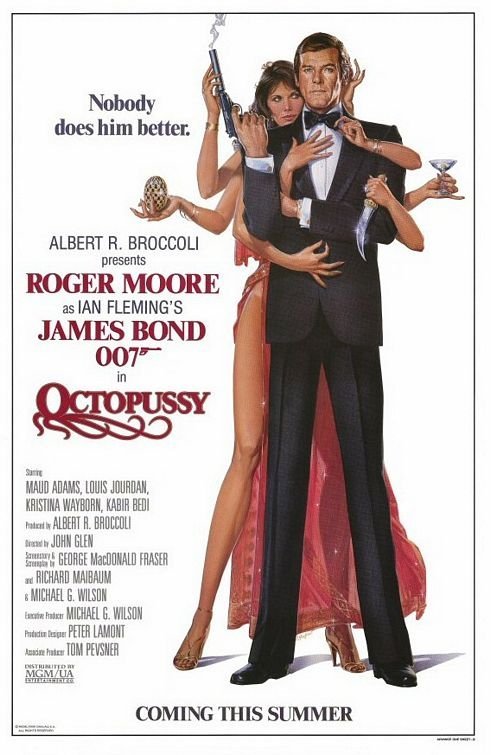 Graphic and intense violence was crucial to mid 1970s-early ’80s action films, and Roger Moore’s final three James Bond films were no exception. These were cranked up; shot and edited in the fashion of American action and exploitation cinema, and reflecting new sensibilities in younger audiences at the time. I disagree with the commonplace notions that the Moore series of films playing this character were not as riveting as the Connery series, because of Moore’s British upbringing. His predecessor, Sean Connery, being Scottish, exuded a different kind of magnetism and charisma, but where Connery was often brutal in the punishment he dealt his enemies, Moore was almost bloodless in his actions (though there is a nifty head-shot in this movie), and maintained a stiff, British upper-lip. Most Bond fans in my age bracket prefer Moore over Connery for the very simple reason that they (as I) grew up watching Moore’s cycle of espionage thrillers.

In a humorous pre-credits sequence, Bond almost single-handedly deposes a Castro-like despot with the help of a pretty lady and a personal jet fighter.  After his mission is accomplished, he stops the jet at a gas station on a lonely dirt road.  He tells the owner to “fill ‘er up!”  Cute.  Next we move into the montage of naked ladies and guns set to Rita Coolidge’s theme song, All Time High (the lyrics to which I have never forgotten).  I’ve always enjoyed the fact that “Cubby” Broccoli put the majority of his crew credits at the beginning of his Eon Productions Bond films even after an unofficial agreement between motion picture studios (circa 1979) put into practice to relegate those credits to the end of the picture.  It’s sort of a tip of the hat to the people that work hard on these films.

In pre-Glasnost times, evil general Orlov wants more power and influence.  In Soviet Russia, pajamas wear YOU!  Orlov wants to expand the hypothetical Soviet Empire, and his superiors think he’s mad.  The art direction and cinematography of this scene recalls Doctor Strangelove’s war room.  SIS Agent 009 (dressed in a clown suit) is found dead with a Fabergé egg in his possession.  The egg turns out to be fake, but Bond finds the real egg, plants a bug in it for his latest conquest, Magda, to steal and return to the evil Kamal Khan (an appropriately sleazy, eyeball-eating Louis Jourdan – yuck!).  Bond learns that Orlov has been working with Khan, selling “priceless” fake Russian treasures (the aforementioned egg) and smuggling the genuine articles across the Iron Curtain by way of a bizarre woman (Maud Adams as “Octopussy”, in her second Bond film) with a serious octopus fetish.  When I say serious, I mean serious.  Her bed looks like an octopus.  Her tables look like assorted octopi.  Her curtains … well, you get the point.  She’s an extremely beautiful, fabulously wealthy smuggler (and circus owner) with a private army of hotties.  It takes a while, but Jimmy finally sets his sights on her.

Orlov’s true scheme is to smuggle a nuclear warhead by train to a United States Air Force Base in West Germany (remember West Germany, kids?), where it will detonate in the middle of one of Octopussy’s circus shows.  Orlov’s ultimate goal is to create destabilization and doubt in neighboring nations where he can easily take control and thus, expand the Soviet empire.  Ultimately, Bond masquerades as a clown (like Agent 009), and removes the detonator before the warhead can explode and spoil a decent circus.  I secretly hoped the bomb would go off, because I have a (admittedly irrational) fear/hatred of clowns, but the good guys must prevail.  The baddest of the bad, Jourdan and his evil (again with the evil!) henchman abscond with Octopussy and escape in a small aircraft, but not before Bond (or his incredibly obvious stunt double anyway) can jump on the roof and mess with their engines, and rescue the damsel.

This is truly a fun movie with lots of action (expertly directed by John Glen, who helmed five Bond movies).  Glen started on the Bond series as an editor, cutting On Her Majesty’s Secret Service in 1969.  The set pieces are thrilling, and I noted infrequent use of blue screen as most of the visual effects were shot in-camera.  Octopussy would be followed by Moore ‘s last Bond film, A View to a Kill in 1985, and then Timothy Dalton would take over the role for two movies.  There is an interesting bit of trivia here in that Dalton (along with James Brolin) were suggested to replace Moore in Octopussy when his contract was up.  Later in 1983, Sean Connery appeared in the non-canon Bond film, Never Say Never Again, directed by Irvin Kershner.  When Never Say Never Again (with Connery) was announced, the producers renegotiated with Moore to keep him on in direct competition with that film.