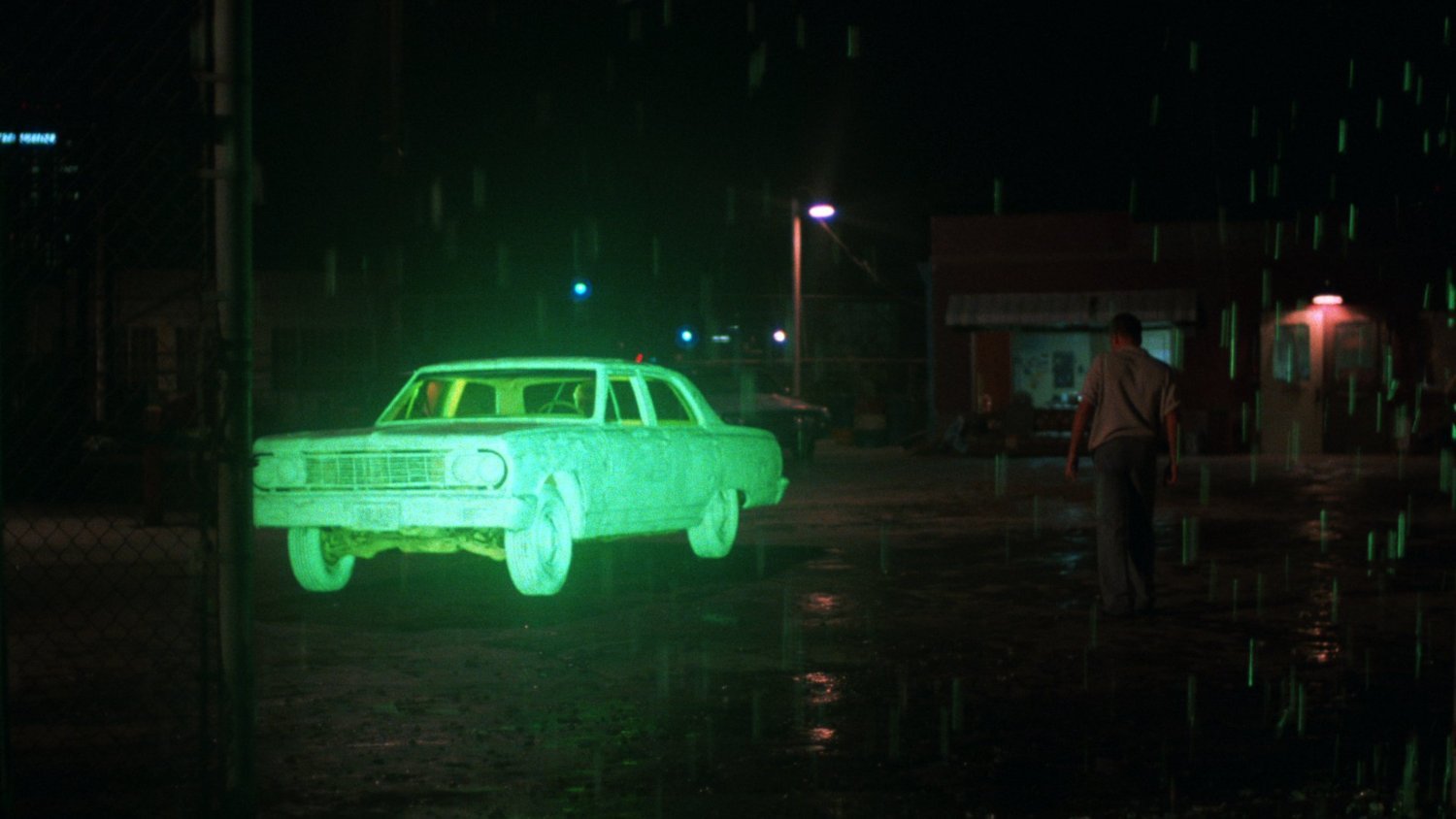 “The more you drive, the less intelligent you are.” 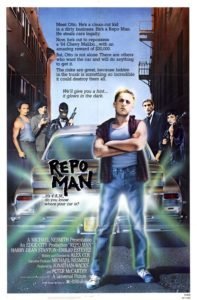 A state trooper pulls over a ’64 Chevy Malibu, and asks the bizarre driver what’s in the trunk.  The driver tells him, “You don’t wanna know.”  The trooper opens the trunk and is instantly disintegrated, and all that is left is a pair of smoking boots.  This opening bit sets the tone for what is to come.  The dystopic contemporary depiction of a Los Angeles in the grip of poverty, writer-director Alex Cox’s Repo Man is a landscape of smashed windows and busted televisions, of manipulative evangelists, and UFO nuts.  Emilio Estevez is not quite a punk. more of a poser (the kind of person who admires the lifestyle, but really wants a house in the sticks with a 2-car garage – I know many people like this), because he holds down a steady job (until he loses his cool) in a supermarket, and while he joins his friends for nightly “mosh” sessions, he has more on his mind than getting wasted.

One day, he hooks up with Harry Dean Stanton (always a joy to watch in any film), who asks him to hot-wire a car for $10 because he “lost the keys, and his sister is pregnant.”  Estevez agrees, but wonders why a Mexican man is trying to stop him as he does it.  He drives off with the car, and Stanton leads him to a junkyard, where the car is impounded.  Estevez’s Otto isn’t the sharpest knife in the drawer, but he comes to the conclusion he just repossessed a vehicle.  Stanton offers him a job; good money and benefits, but Estevez hates these people, and I can understand why.  They repossess cars (a kind of legal version of theft) when the owners don’t make their payments, or for other reasons (say they’re late on house payments or utilities).  To Otto, they contribute to the downfall of a schizophrenic economy and the cultural wasteland.

When Otto discovers his parents have given his college money (See? Not a real punk!) away to a televangelist, he reluctantly takes up Stanton on his offer, and soon he’s lifting cars at an impressive rate.  He gets to know and bond with the denizens of the Helping Hand Acceptance Corporation.  He listens to crazy theories about alien spacecraft and time travel, life and money, and, inexplicably John Wayne’s sexual orientation.  Otto’s life is turning around, and a schism develops between him and his punk friends (one of them bears a striking resemblance to my buddy, Noah).  He gets a kooky girlfriend, who is obsessed with the UFO culture, and he finds he’s been cased by spooks and weird chicks with mohawks.

The Malibu is making the rounds and a bounty goes out on the vehicle.  $20,000 to the person (or persons) who can repossess the vehicle.  It makes sense the vehicle would be hot (figuratively as well as literally), and Stanton is locked in a battle of wits with the Rodriguez Brothers, the only other hacks in the game as bad-ass as Stanton’s Helping Hand cronies.  You have an unusual convergence of like-minded nitwits in skid-row: car repossessers, alien abduction nuts, Feds, and religious fanatics all coming together to unlock the power of this vehicle.  In the mish-mash of social commentary littered about the grounds of Cox’s narrative, what we see are emerging trends.  Cox’s worldview is not unlike that of a punk.  There are forces out to control you, and none to liberate you.  That makes a whole Hell-of-a-lot of sense if you consider yourself disenfranchised.

The Malibu changes drivers a few times when the Rodriguez Brothers lift the car, which is then stolen by a couple of Otto’s friends.  The original, crazed driver taunts them into opening the trunk, and they get zapped.  He takes back possession of the car, picks up Otto hitchhiking, and promptly dies behind the wheel, after confessing to him that he had a partial lobotomy in order to negotiate the heavy stress of driving this beast.  As government agents, priest, rabbis, and UFO enthusiasts swarm on the vehicle, it emits lightning and fire, and only Otto and his co-worker, Miller (who told him earlier he refuses to drive and does all his thinking on a bus), can get behind the wheel.  The Malibu ascends into the air and flies into space.  We never really settle on what is inside the trunk.  The crazy driver tells Otto it’s a neutron bomb.  Otto’s girlfriend tell him it’s the corpses of two aliens that emanate dangerous radiation.  I’m guessing it’s a MacGuffin, merely to keep up our interest in the movie, but it doesn’t matter.  This is such an interesting and entertaining film populated with incredible characters that it doesn’t need this device (or vehicle, as the case the may be) to tell the story. 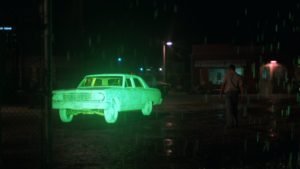 For this movie to come out when it did, March of 1984, in the middle of the sex comedy and slasher film explosion, and the beginnings of the opening weekend mindset of Hollywood, Repo Man initiated a major smack-in-the-face to the conventions of filmmaking.  Similar in style to something like Jim Sheridan’s Breathless, but with a story and characters we give a crap for, Repo Man is a cultural send-up of science fiction, crime-drama, and tales of government paranoia.  It shows a side of Los Angeles we aren’t used to seeing.  An extraordinarily bold and gifted filmmaker, Alex Cox would follow-up Repo Man with Sid & Nancy, and the much-maligned (although I liked it) Straight To Hell.

Sourced from a VHS tape recorded off the Independent Film Channel (IFC), extended play, circa 2002-2003.  This was back when IFC ran uninterrupted films with no commercials.  Also on the tape were Harmony Korine’s 1997 oddity, Gummo, and the 1978 remake of Invasion of the Body Snatchers starring Donald Sutherland, Leonard Nimoy, and Brooke Adams.